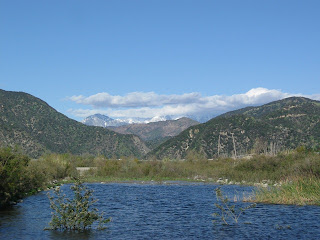 In Part 1 of this report, we did a little exploration of the area in the neighborhood of Ontario International Aiport (ONT).  Now, we're going to explore beyond and see what the rest of the Inland Empire has to offer... 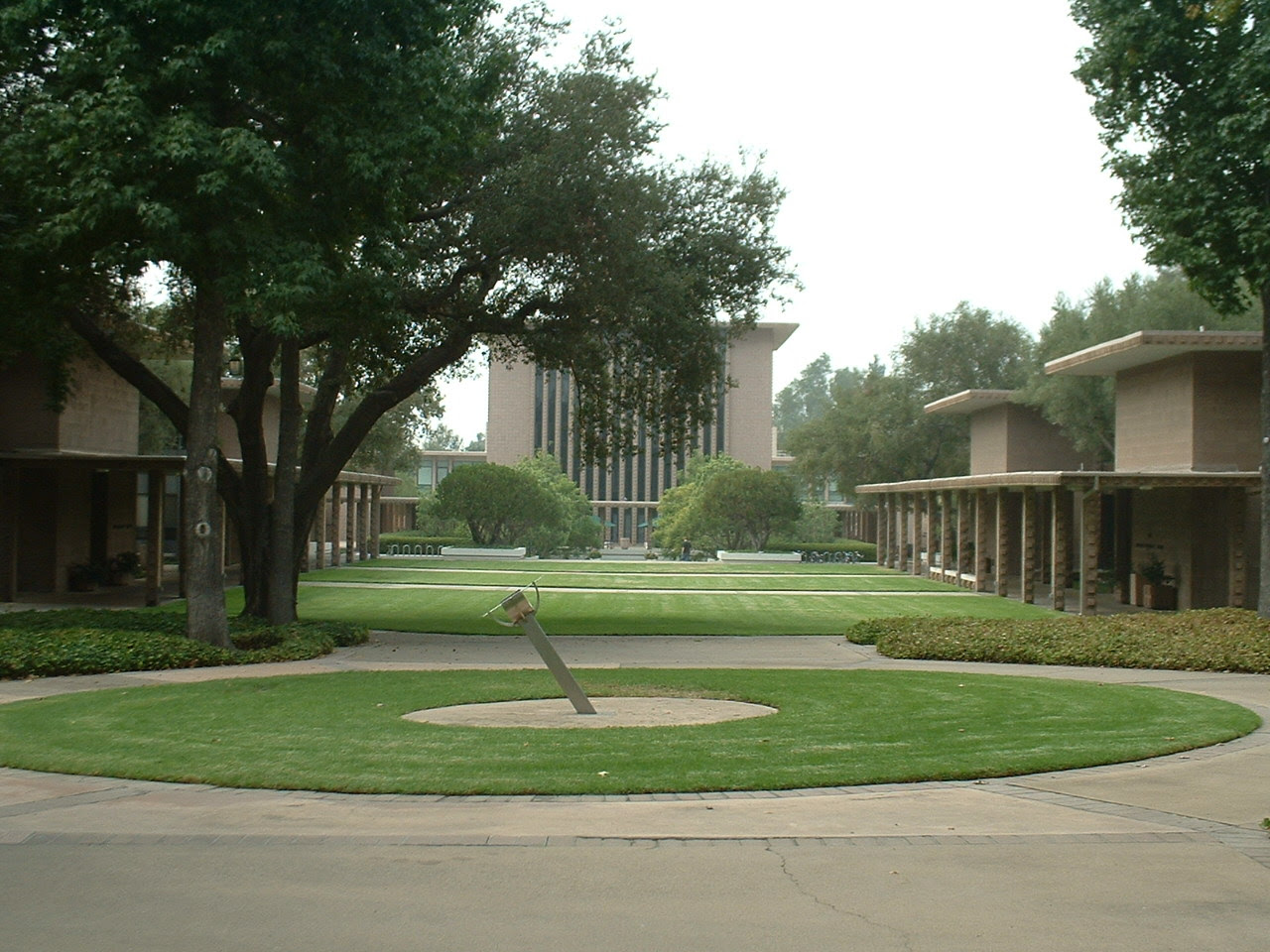 As complete and busy as Ontario is, I think I’d still prefer to stay somewhere else.  Just to the west of Ontario is the college town of Claremont.  A shady, tree lined and beautiful suburb nestled at the junction of superb transit connections surrounded by great shops, restaurants, and campuses that’ll make you think you’re in the Ivy League.  My choice here would be to stay at the DoubleTree Hotel on the corner of Foothill and Indian Hill Boulevards.

This large hotel with expansive grounds sits right on Route 66.  The adjacent shopping center has a Trader Joe’s, a Buca de Beppo, and a nice Mexican restaurant with a patio to sip margaritas on.
A few easy blocks to the south is the Village, the heart of Claremont.  An upscale collection of shops and restaurants surround the Laemmle Theatre, where art films are shown alongside the latest blockbusters.  Before the movie, have some artisan bread at Le Pain Quotidien.  Afterwards have the awesome and expensive Back Abbey burger along with some great Belgian brew and fries in the alley behind the theater but for a more reasonable, and equally good, place for burgers and microbrews, head south a hundred yards to Eureka! Gourmet Burgers and Beer for what we consider the best burgers in Southern California.
For dessert, wander a block east to have one of the custom creations at Bert & Rocky’s Ice Cream parlor. 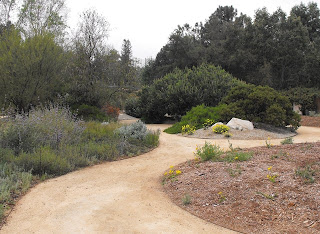 If you need to work off those calories, the Rancho Santa Ana Botanical Garden offers miles of trails through beautiful gardens that are planted with 100% California native plant.  Those trails are also wheelchair accessible and the entrance is located at an easy-to-get-to spot on Foothill Bl., just east of Indian Hill Bl. 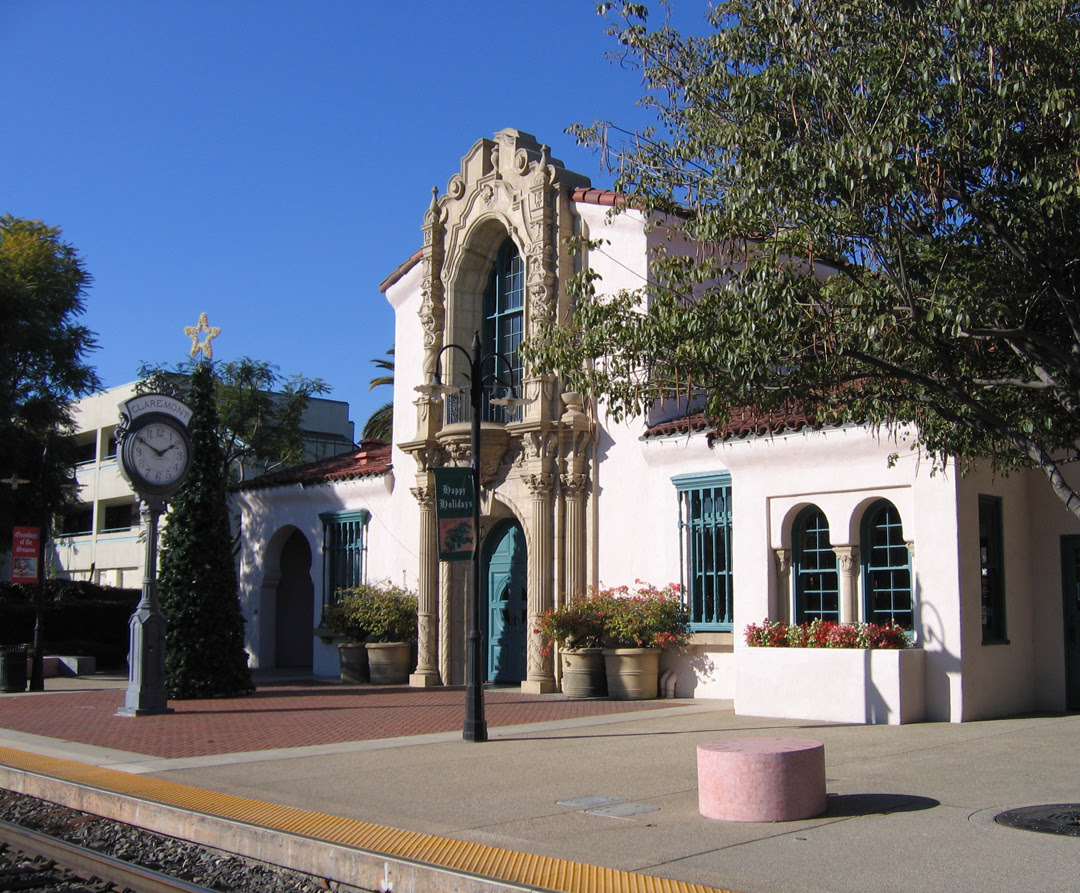 Picture courtesy of Wikimedia
Oakshade under CC-BY-SA license
Getting out of town is easy here, at the south end of the Village is the historic train depot, now served by Metrolink.  Wheelchair accessible commuter trains run through here seven days a week, providing easy access to downtown Los Angeles to the west and San Bernardino to the east.  In front of the station, the accessible buses of Foothill Transit offer more connections to points like Old Pasadena, Los Angeles, and the cities along route 66. 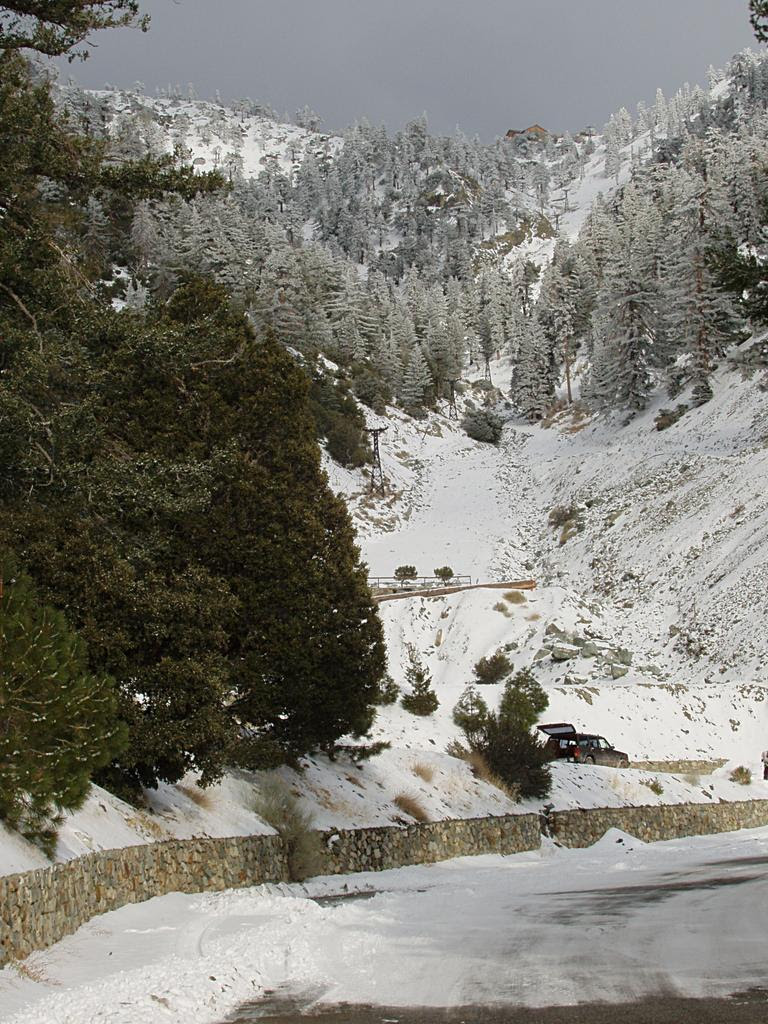 
If you’re a skier, a 30 minute drive north up Mills Avenue will put you at the slopes of Mt. Baldy, the closest ski area to Los Angeles.  Water sports lovers will be a little confined at Puddingstone Lake at Bonelli Park, just a little southwest of here between La Verne and Pomona.  Gamblers might like to take in the action of horse races at the Finish Line Sports Grill in the White Avenue parking lot any time of the year for off-track betting.  It's located along the border of La Verne and Pomona.
Speaking of La Verne, locals know that this is one of the best pizza towns around. College students like to hang out at Warehouse Pizza on the corner of Bonita and D Street.  Great pizza, sandwiches, and beer can be consumed on their excellent outdoor patio.  North on D, at the corner of Foothill Blvd., is The Pizza Barn where another delicious pizza awaits you in the drafty dining hall.  For a more sit-down experience, Pizza ‘n Stuff serves another great pie in the Von’s center at the corner of Foothill and Wheeler Avenue.
While many locals have their favorite spots, for me all the La Verne pizza places are good but one rises above the rest, Joey’s Red Devil Pizza in the CVS shopping center on the north side of Foothill and Wheeler (directly across from Pizza ‘n Stuff). 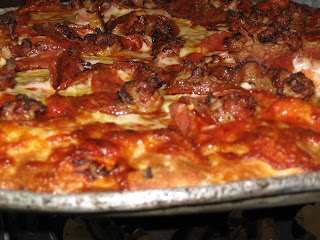 Starting off with their worn but comfortable dining room surrounded by Mafia and rock 'n roll knick knacks, we start off with a pitcher of great Hefeweizen while watching sports on one of the five flat screens.  Not on the menu is their cheese and jalapeno breadsticks that will just melt in your mouth with the cup of ranch dressing they bring on the side.  It’s topped off with the best pepperoni, sausage, and American bacon pizza you’re likely to ever have.  The pasta carbonara is also among the best we’ve had.
The dining room is small but there are 3 or 4 tables that a wheelchair can squeeze into. 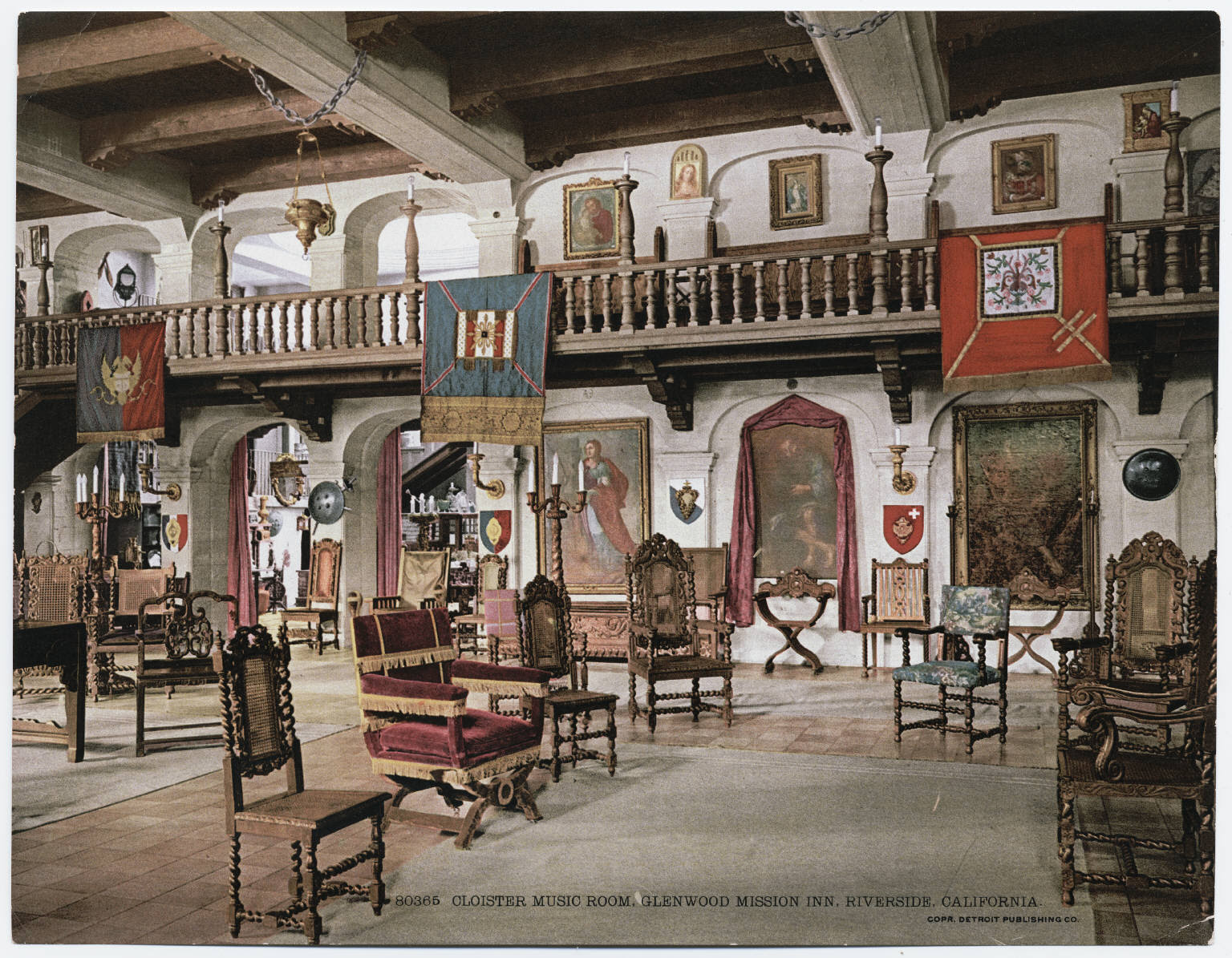 At the other end of the IE, Riverside is like a faded jewel waiting for its comeback.  Centered around the magnificent Mission Inn Hotel, downtown Riverside has great restaurants sitting beside homeless encampments, government buildings and the county jail.  Not quite ready for its closeup but getting close.  One sign is that the beautiful Fox Theater has just been restored and is now hosting great events just up the block from the Mission Inn.
Heading back west from Riverside on the 60 freeway at the intersection of the 15, amid all the industrial buildings just south of the freeway is a slice of old California.  Galleano Winery still makes wine from local zinfandel grapes.
Cucamonga Valley is one of the state’s oldest wine making areas.  Developmental pressures from nearby Los Angeles has all but wiped out the local industry just leaving a couple of hardy, never-say-die old school winemakers left.
One of those is Don Galleano, who runs his family’s wine making operation.  50 acres of grapes on one side and the warehouses and factories of Riverside County on the other.  In between is the old farm with its barns, houses, and a small zoo.  The little tasting room offers plenty of great tasting wine.  We like to buy a bottle and relax under the trees at their little picnic area next to the animals. 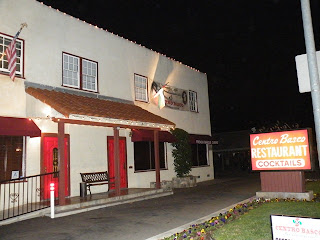 It’s also helpful to pick up a coupon here and take it over to Centro Basco, about 5 miles east of here in Chino.  Another relic of the past, this Basque restaurant serves hearty European fare in their dining rooms.  Give the waiter your coupon and receive a free glass of Galleano wine.  Then sit back as course after course of delicious food is brought to your table…soup, salad, bread, pasta, pickled tongue, cheese, steak, vegetables, and French fries. 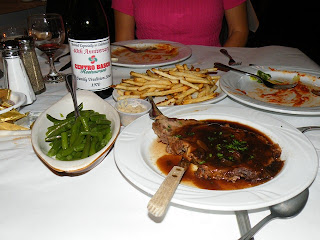 After this hearty and delicious dinner, we head back home to think about what we’ll do next in this unknown but fun and historic area of Southern California.

Darryl
Copyright 2010 - Darryl Musick
All Rights Reserved
Posted by D. Musick at 5:16 AM No comments: 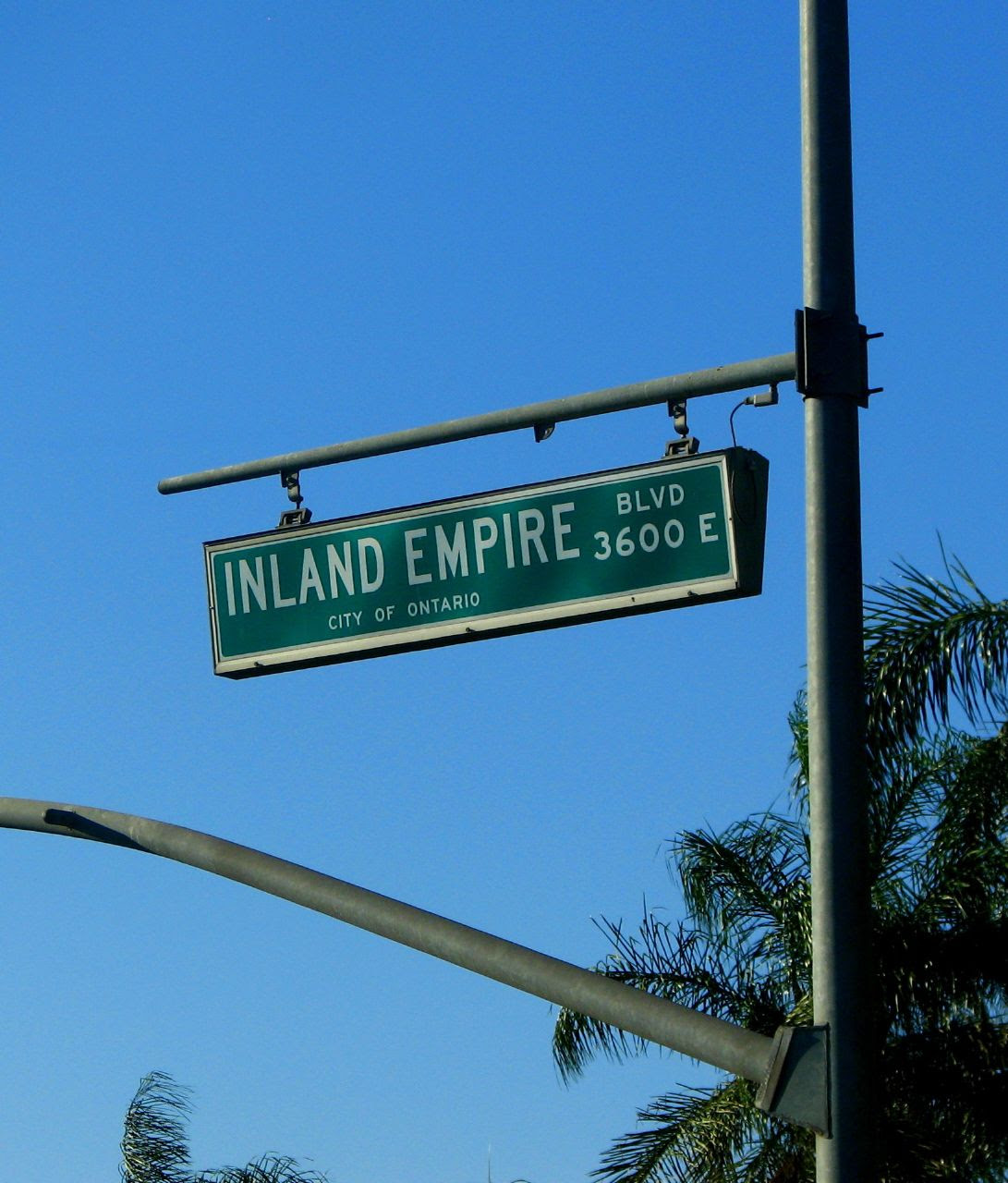 Picture courtesy of Wikimedia
Jessie Terwiliger under CC-BY licence
On the OC, it was known as the 909. Growing up years ago in L.A., we knew it as the “sticks.” We now know better…

Flying into L.A., you have several airport choices.  By far, the busiest is Los Angeles International (LAX) but if you have a choice, any of the outlying airports would be a better choice.  Forty miles east of LAX is Ontario International Airport, located in the heart of the Inland Empire.

While it’d make a great place to arrive in L.A. by itself, consider sticking around in the neighborhood to see what the area has to offer.

The Inland Empire is the area east of Los Angeles, stretching approximately from the 57 freeway in the west, out to the hills east of Redlands and Riverside to the east.  In the north, it is bounded by the San Gabriel and San Bernardino mountain ranges and continues south to Corona.

Although San Bernardino and Riverside are the two big cities of the IE, Ontario has replaced both as the heart and commercial center of the area.  Not only will you find the major airport here, but also loads of hotels, restaurants, and some major shopping areas. 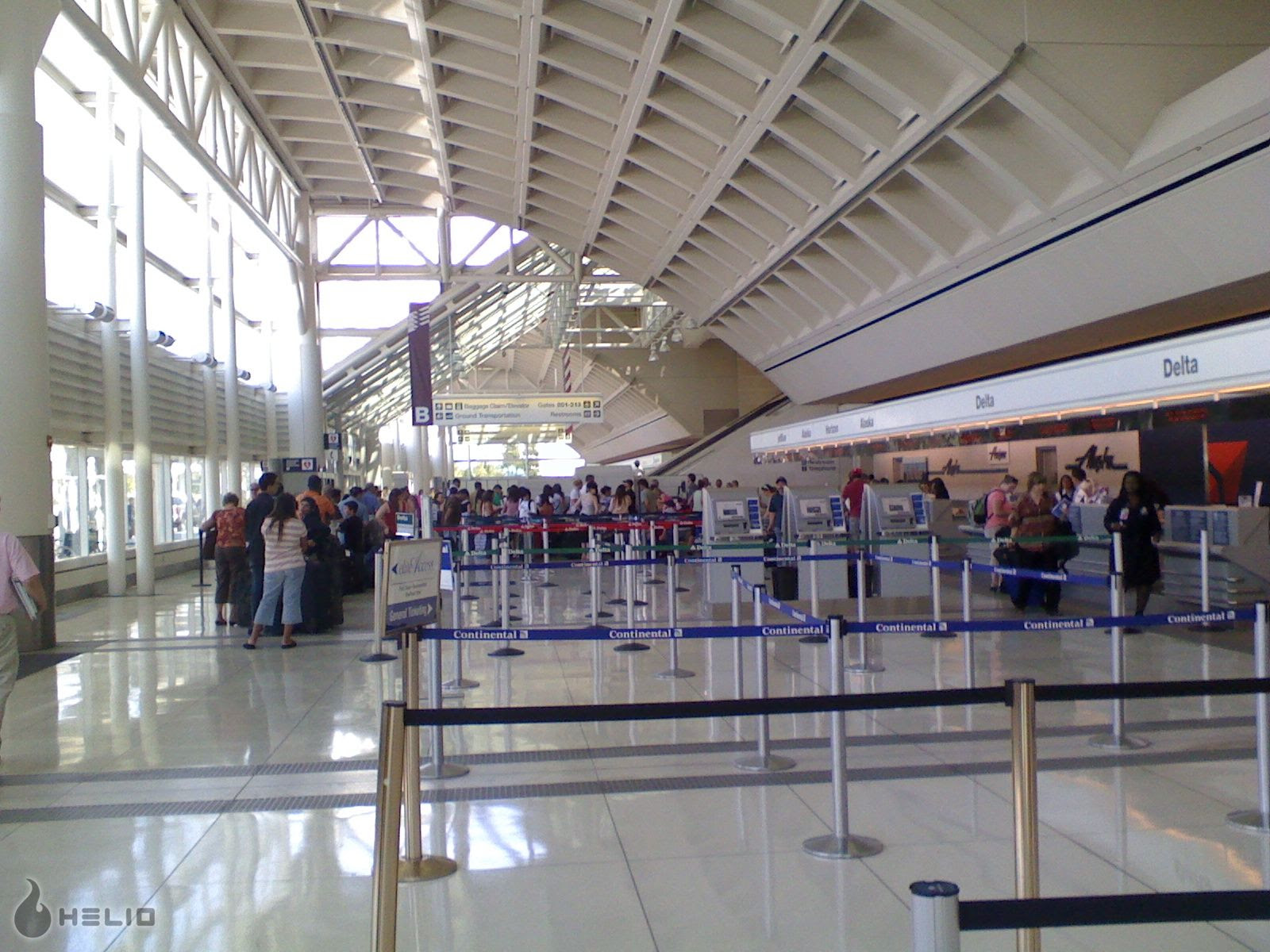 If you’re in a wheelchair, flying in and out of ONT is a breeze.  The crowds of LAX are not here, parking is close by…even the long term…and the baggage handlers (especially at Southwest) really know how to take care of a chair, even a heavy power chair.

There are a number of hotels in the immediate are of the airport but I’d advise you to get out into other areas for your visit.  Not far away is the huge Ontario Mills shopping center.  You’ll find the aloft Hotel, a trendy little boutique place run by some very nice people; plus the Hyatt Place and Country Inn and Suites located right at the shopping center.  All are great hotels and Ontario is not an expensive hotel city. 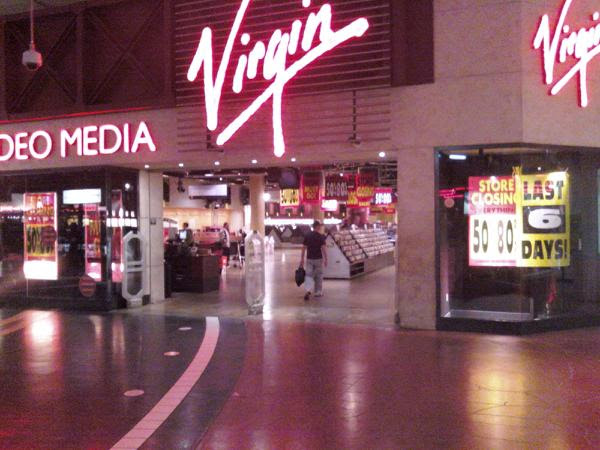 If you’re a shopper, Ontario Mills is a huge, indoor mall filled with outlet stores.  There are also a lot of chain restaurants inside, plus entertainment options like Dave ‘n Busters, Edwards, and AMC Theatres.  Not far from this mall is a factory outlet for New Balance shoes, a huge Bass Pro Shops (eat at Islamorada, inside, very good), plus another more upscale outdoor mall just to the north in Rancho Cucamonga…Victoria Gardens.

Sports lovers will also like that minor league hockey and NBA D-League games take place at the Citizens Business Bank Arena just a block away. The Dodgers AAA team, Cucamonga Quakes, play just north of here at the Epicenter. The arena also hosts a number of concerts and events, such as the circus. 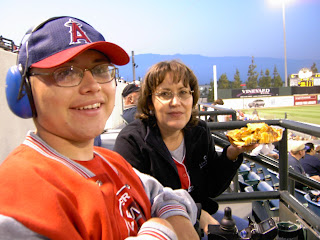 Part 2 where we'll venture out of Ontario to see the rest of the IE, is coming soon.

Darryl
Copyright 2010 - Darryl Musick
All Rights Reserved.
Posted by D. Musick at 5:29 AM No comments: