I find it kind of ironic that the Angels play in a stadium named after the devil, but that's their home facility for Spring Training.  In fact, when their pre-season games are televised, it's on Diablovision...that would be Devil vision for the espanol impared.

Thanks for the info, Tim. 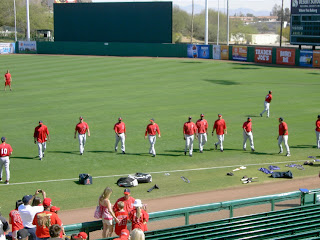 For wheelchair users, the rim around the top of the field level is where you'll sit.  It's a small stadium by Cactus League standards and the views are excellent.  You will find a ramp on both the 1st base and 3rd base sides when going in by home plate. 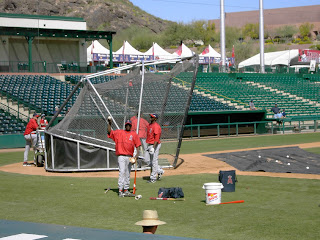 1st Base Coach Alfredo Griffin Tosses Balls to the Spectators

If you go to watch the workout in the morning, it's free and you can get a pretty up close look at the stars but you'll have better luck getting autographs in the parking lot as the players move between fields for different workouts.  Sometimes the coaches will autograph shag balls and throw them up into the stands for the fans.

For Spring Training games, ticket prices range from $10 to $34.

The stadium is served by accessible public transportation via Valley Metro's 48 line bus.  The 48 bus also connects with the new light rail system at the Valley Way/College Avenue station.

Next week, the real fun begins...baseball season in the states starts on Wednesday (two games have already been played in Japan) and the Angels home opener in Friday, April 6th when Albert Pujols makes his official debut as a Halo when they host the Kansas City Royals.