Run by husband and wife, Darren and Faith Brehm, I'd like to welcome Abilitytrip.com to our list of Favorite Links. Abilitytrip.com is another resource for your accessible trip planning. With reports from destinations around the globe, you can use it to know before you go whether it will be accessible enough for you.

Also handy are the trip tools, like a packing checklist and travel documentation template to help you make sure you have everything when you go.

I plan on using this site to help with upcoming trips and think it'd be a great resource for all my visitors to check out.  Find their link in the blogroll, over in the left column, or click the link below and add to your favorites.

abilitytrip.com
Posted by D. Musick at 7:23 AM 3 comments: 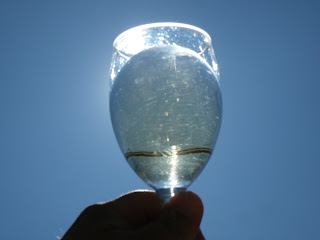 Ready for the Top Five?  Last week's first installment of the Top Ten are below these five.  Now, on to the Top Five most popular Cocktail Hour videos, as voted by you, our visitors...


5. Tequila Tasting with the Tios - A cross-border tequila run, followed by a tasting session at a Yuma hotel with two of our Mexican uncles and our aunt.  These guys know their tequila and it was a lot of fun filming this with them. 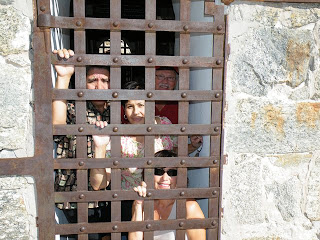 Tequila Tasting with the Tios

4. Amaretto Sour - This lower alcohol cocktail proved mighty popular with our visitors.  Note that although it is lighter in alcohol, it still packs plenty of calories.  Still, a tasty drink. 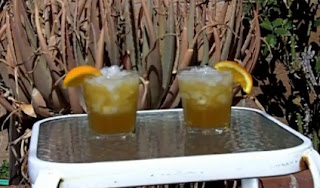 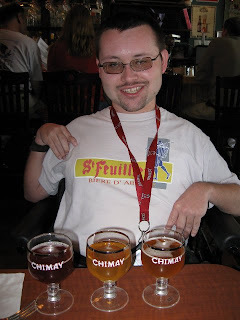 1. Tequila Sunrise - At number one is this classic Mexican cocktail, popular all along that country's coastline.

Here is the rest of the Top Ten Cocktail Hour Videos...


10.  White Sangria - This wine based drink has lower alcohol content than most of our recipes.  Since it's mostly wine and juice, it's not bad in the calorie count either.

9. Tequila Party at Rudy's - Each year, Rudy's Mexican Restaurant in Monrovia, California has a tequila tasting night with free-flowing agave spirits poured by reps from different distilleries.  Rudy also puts out a great buffet to keep those stomachs full. 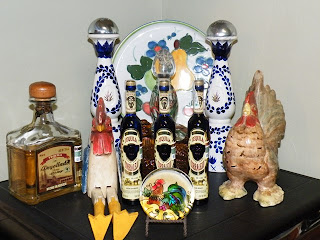 8. Daiquiri - Hemmingway's favorite drink.  This recipe is from the original...no mixes or substitutes.  The result is delicious.

7. Classic Margarita - My best margarita recipe...on the rocks.  This is also the first Cocktail Hour video we ever produced.

6. Cosmopolitan - The pink drink favored by the women on Sex in the City.  Here's how to make one of your very own.

A COUPLE OF DAYS OFF: Happy Anniversary!

While my wife and I take a few days to celebrate our 25th wedding anniversary, I'll be rerunning some posts this week.  Enjoy them and explore the archives over on the left to see what you've missed.  Don't worry though, new posts are on the way and we'll be back to all new soon.

We have a new blog to add to our family of blogs, Musick's Music.  Here is where I present some of my favorite songs and artists, along with some commentary, and...most important...links for you to download legal copies of the songs or order CDs.  (that's the important part because that's how we pay for the blog...thank you for your support)

Yes...it's there to make money, but you'll get free content, free video performances of the songs and artists, and we think you'll enjoy it even if you don't buy anything.  We just ask that if you do like what you see and hear, that you use our links for purchase.  It doesn't cost you anything extra, but it will help to offset the cost of producing all of our blogs. 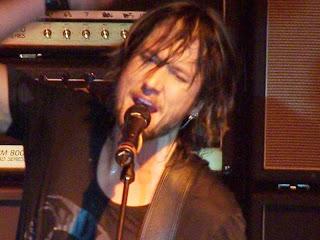 So come on over and enjoy some great music across the musical spectrum at Musick's Music today. 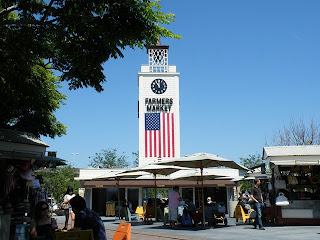 We've all been there.  Take time to travel to a far away, famous destination and then find out it doesn't live up to expectations...it just sucks.

Today, we're going to start an occasional series here on The World on Wheels called "Places That Don't Suck."  This is for well known tourist attractions and destinations that actually live up to their billing...places that won't waste your precious travel time. 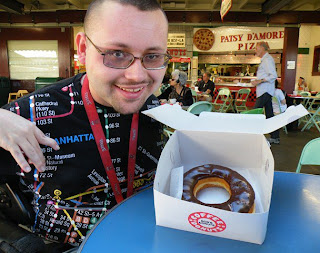 Tim loves Bob's Donuts at the Market
We'll start with one that is fairly local to me, the Original Los Angeles Farmer's Market, located at 3rd and Fairfax, just south of Hollywood.  The Original is added to the name to distinguish it from the Hollywood Famer's Market, which is a weekly market held each Sunday in Hollywood.

This market is open everyday.

The market got it's start back in the depression when Arthur Gilmore allowed farmers to gather on his land and sell produce out of the back of their trucks.  It was a hit and the market grew into more or less permanent stalls.

Gilmore, who had struck it rich earlier when he tapped into the huge oil deposit underneath his land, never let an opportunity pass.  He had also built a racetrack, baseball stadium, and performance auditorium on his property, attracting people by the horde. 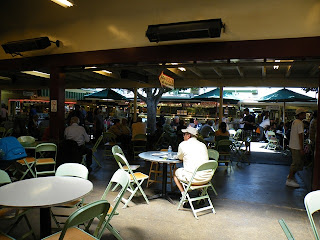 Located near to Hollywood and next door to a busy TV studio, the market and its shops have always attracted a fair share of celebrities and outright stars.  It's one of the best places in L.A. for stargazing, we have never gone there and not seen at least one person who we've seen on the screen. 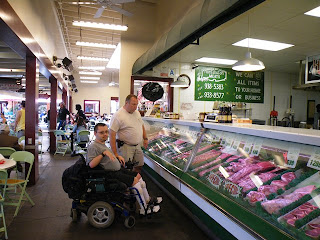 Most of the produce stands are gone now, two remain.  Two of L.A.'s best butchers still set up shop here, along with two poultry shops, a fishmonger, and a French market.  There are a lot of great places to eat here, with just about any ethnic variety you can think of...there's also a couple of not so great places too (I'm looking at you, Gumbo Pot).

Next door is one of the area's poshest malls, The Grove of L.A.  You can take a wheelchair accessible double-decker street car from the back of the Farmer's Market to the other end of The Grove.  2 hours of free parking are available with validation, but you want to get here early before it gets full. 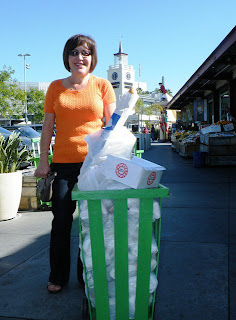 We come at least twice a year to buy a freezer's worth of meat from the great butchers and Puritan Poultry.  While we're here, we'll spend a few hours just exploring and enjoying the market.

Here is the rest of the tour... 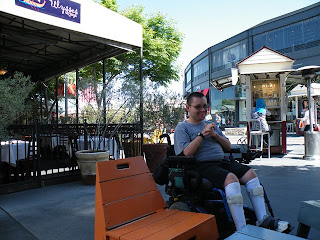 There are plenty of places to just relax and chill here at the market.  Tim and I are hanging out at the edge, on the border of The Grove, which is on the right of the picture.  To the left is the Farmer's Market. 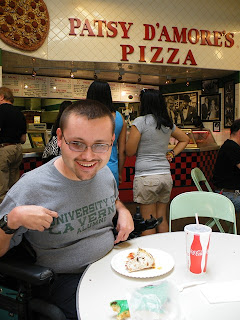 Patsy's is L.A.'s oldest pizza place.  Tim enjoys a slice.  It's decent, better that Pizza Hut or Domino's, but you can still find better. 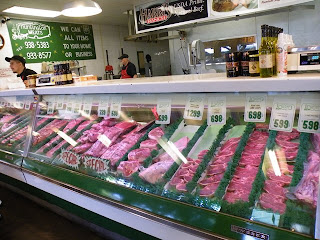 Huntington Meat Market, they make their own outstanding sausages plus sell a large variety of Prime meat. 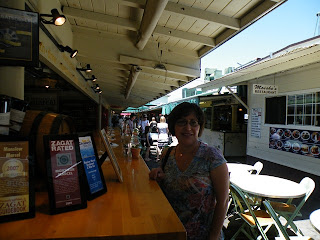 At the counter of Monsieur Marcel's wine counter, with Moishe's Jewish restaurant across the way. 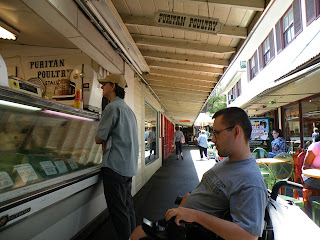 At Puritan Poultry, where we buy all things bird...chicken, duck...and rabbit too.  Rene is the de-boning artist here.  One time, we had a big order to fill and we let George Segal go ahead of us because he only wanted to buy one chicken.  He was very nice and thankful for it. 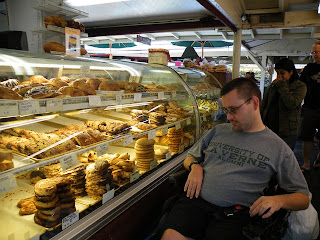 Tim eyes the pastries at T&Y Bakery while we pick out our poultry across the way. 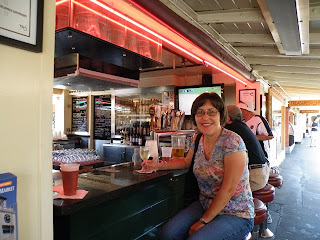 Can you do this at your supermarket?  While Rene is preparing our poultry order, we hop across the way for some wine and beer while we wait. 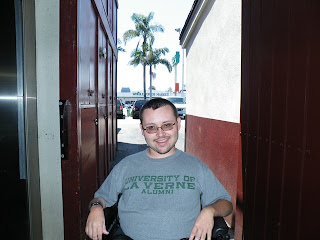 With everything The Original Farmer's Market offers, I don't know why anyone would shop at that store across the street.

Watch for some more about the Farmer's Market later this week when we do another video report.

-Darryl
Copyright 2011
All Rights Reserved
Posted by D. Musick at 4:52 AM No comments:

Picture courtesy of Wikimedia
Ixnayonthetimmay under CC BY-SA 1.0 license
Spend a few days in the Phoenix, Arizona area and one thing will be apparent…this place is huge!  What looks like it might be just down the street on a map can end up being twenty miles or more when you drive it.
This kind of sprawl makes public transit quite a challenge…a challenge that the Phoenix area is still trying, with various degrees of success, to meet.
Valley Metro is a conglomeration of various regional and city transit systems all working under one consolidated umbrella.  Mostly buses, a light rail component was added in 2008 running from Tempe/Mesa to north of downtown Phoenix.  It also serves the Sky Harbor Airport.

LIGHT RAIL – There are 27 stations on the route.  An airport shuttle will transport you to the nearby station there.  It mainly travels down the center of streets so it’s more like a street car in some respects.  An extension to the Metrocenter Mall, north of downtown Phoenix is under construction. 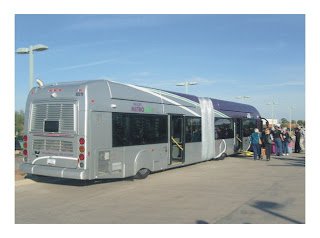 Picture courtesy of Flickr
Nick Bastian under CC BY-ND 2.0 license
LINK – This is a rapid-bus system that uses long, articulated buses on very limited stop service.  Buses have stoplight override capabilities and the stops themselves have “next bus arriving in” signs letting you know how long until the next bus shows up.
LINK runs from Gilbert and Mesa in the east and from Chandler in the south to the Sycamore/Main St. Transit Center at the eastern edge of Tempe.  Click here for a route map and brochure of the LINK system.
BUS – Local, express, and limited stop bus services makes up service to the rest of the more than 2,000 square miles of the metropolitan area.  Express routes have route numbers in the 500’s.
Click here for a route map of the system.
Fares are $1.75 for local buses and light rail.  $2.75 for express bus services.  A day pass is $3.50 if you buy before you get on board, $5.25 if you don’t.  Disabled passengers pay $.85 for local and light rail, $1.75 for a day pass.
All Metro services are accessible for wheelchairs and other disabilities.  For more information, visit valleymetro.org.

Picture courtesy of Wikimedia
Ixnayonthetimmay under CC BY-SA 1.0 license
Posted by D. Musick at 9:15 AM No comments: