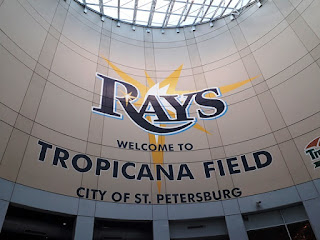 Consistently rated at one of the ugliest stadiums in baseball, the former Thunder Dome was built in 1990...just two years before the construction of Camden Yards in Baltimore would revolutionize Major League Baseball stadiums. Tropicana Field is home to the Tampa Bay Rays. It's pretty far from Tampa, though, keeping the crowds that might usually come pretty far away. 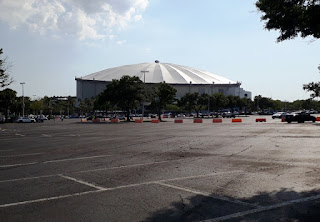 Former called the Devil Rays, the teamed dropped the "Devil" in their name in 2008. The Rays have a history of mediocre teams and being an 'also ran' but had some success when manager Joe Maddon came over from the Angels in 2006, leading to an American League pennant in 2008.

Let's take a look at the stats: 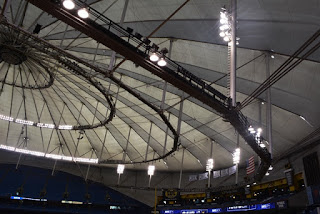 Tropicana Field is the last remaining MLB stadium with a fixed roof. It is one of two stadiums in the league to have an artificial surface, Toronto is the other. A quirk in the ground rules means that if a ball hits one of the inner two rings of catwalk in the ceiling, the ball is in play. If it hits and outer ring, it's a home run. 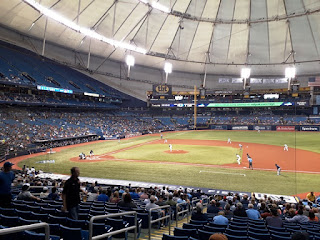 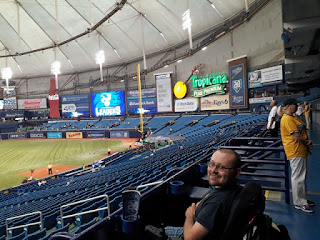 Ticketing is easy, just go to Raysbaseball.com to click 'Tickets' at the top of the page, choose a game date, and click on on'accessible seating.'  We had no problem getting seats for the wheelchair and two companions.  Dynamic pricing means there are no set ticket prices but our seats by first base were around $40.

Public transit is almost non-existent to this park, but there is plenty of parking...some of it free if you have four or more in the car...and is just within walking distance to downtown.

There are a large number of lodging options in the area from retro budget roadside motels to the Four Seasons. We stayed at the Hyatt Place, downtown, which was a very nice, mid-priced, option that included breakfast.

Food choices are quite extensive There is a large food hall, with a variety of options, in the concourse behind first and third base. The night we were there, the hot dogs were very good and only $2. A bit on the small side but the price was right at  was the refillable sodas and popcorn at $5 and $7.50 respectively.

The concessions concourse is closed but monitors at the food stands allow you to follow the game. Lines were short and quick. 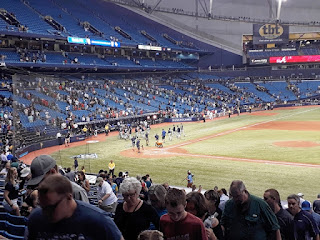 While this stadium is a bit old and has a run-down reputation, we enjoyed ourselves quite a bit here. What they lack in up-to-date amenities they more than make up for with immersive game action and great service to the fans.

Copyright 2018 - Darryl Musick
All Rights Reserved
Posted by D. Musick at 4:30 AM No comments: 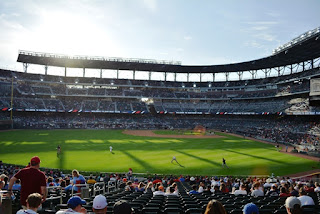 As of this writing, this is the newest stadium in baseball. Replacing the still useful Turner Field in downtown Atlanta, Sun Trust Park brings the Braves to the suburbs in nearby Cobb County. Opened in 2017, the stadium is also the anchor to a new shopping and entertainment center called The Battery Atlanta.

The Braves used to be called America's Team and were the most popular team in baseball for awhile due to former owner Ted Turner's massive broadcasting reach. Braves games were show nationwide on his Turner Broadcasting System (TBS) and the team had fans nationwide. During the 1990's, the team won five National League pennants and one World Series. Here are the stats: 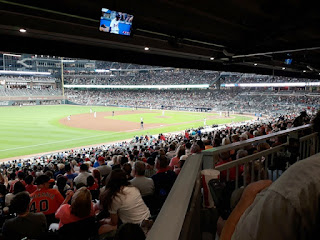 Good access all around the entire stadium. Wheechair seating is plentiful all around the seating bowl. Most accessible seats have an overhang from the deck above blocking the view of the scoreboard. Video monitors are mounted to compensate.

Ticketing is easy, just go to Braves.com to click on wheelchair accessible seating.  We had no problem getting seats for the wheelchair and two companions.  Dynamic pricing means there are no set ticket prices but our seats by the left field foul pole were around $50.

Public transit is almost non-existent to this park, there is not enough parking (we had to park a half mile away, pay $25, and hike to the stadium), and traffic is intense with no one directing traffic that we could see.

There are a few lodging choices are available near the stadium such as Marriott, Hilton, and Omni hotels.

Food choices are the normal ballpark fare. We did enjoy the hot dogs but the popcorn was too salty. They could have had a better beer selection. Our chip-enabled credit card would not work at their snack bars, which required you to slide them through the magnetic strip reader.

The concourse is open and monitors at the food stands allow you to follow the game. This is essential because it took me the first three innings to stand in line and get our food...the staff was nowhere near prepared to handle the record setting crowd that showed up the night we were there (41,807)

In general, we were very disappointed in the fan experience at MLB's newest stadium.

Copyright 2018 - Darryl Musick
All Rights Reserved
Posted by D. Musick at 4:30 AM No comments: