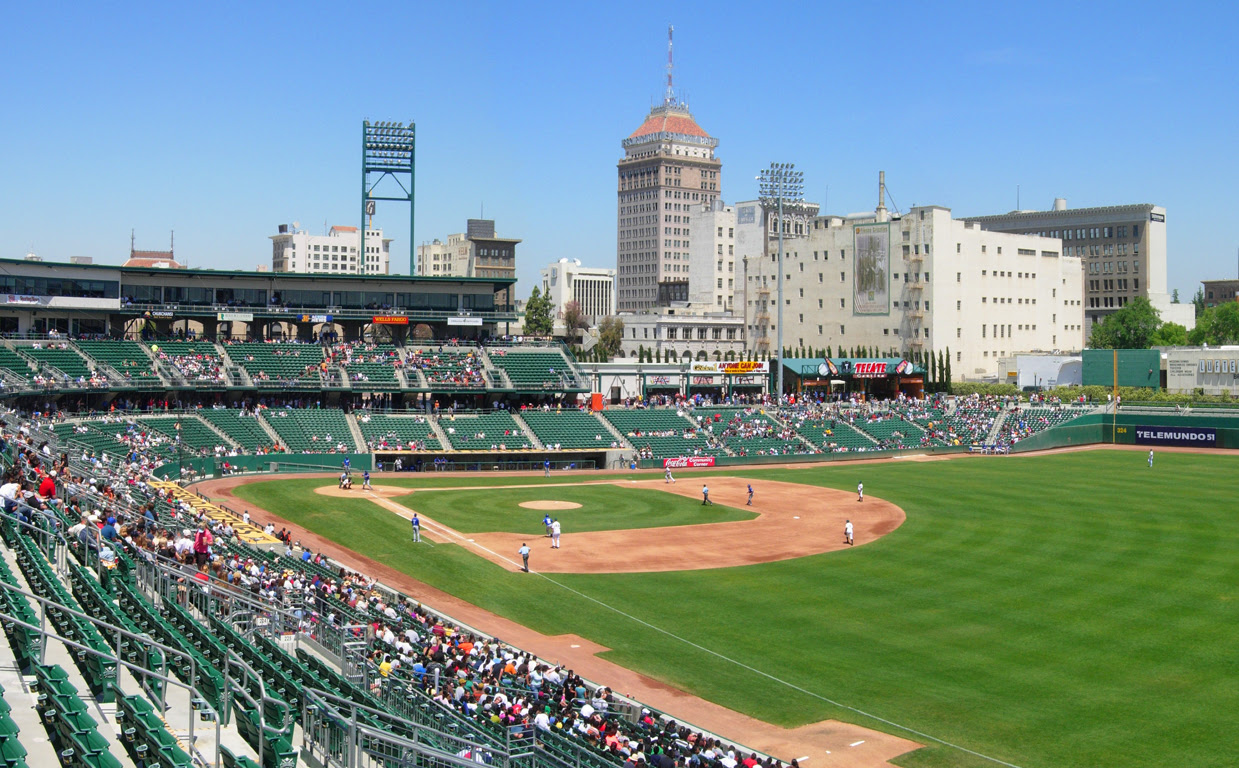 Chukchansi Park is the home of the Fresno Grizzlies, the AAA affiliate of the San Francisco Giants. Opened in 2002, it’s a downtown park designed by HOK Architects, the same firm that designed such major league parks as Camden Yards in Baltimore. The name comes from a nearby Indian tribe who bought the naming rights to promote their casino.

Usually a contender, this year the Grizzlies are dead last, 8 games behind the Tucson Padres.


Here are the stats…


This is one of those minor league parks that looks almost like a major league park. Sitting just west of Fresno’s downtown, it’s probably the best looking structure around. It has a great view of downtown but mostly of the buildings backsides.

The seating bowl consists of two decks, with another level of suites above that. On the first base side, the upper deck is a club with private seating. The park entrances come into the concourse level at the top of the field deck. This is where you’ll find most of the wheelchair accessible seating. There is also accessible seating in the upper deck and in the cheap seats in left field. Ticket prices run from $8 to $24. You will pay a couple of dollars more if you buy at the game. The best wheelchair seats, right behind home plate, are the $17 or $19 (depending on if you buy them in advance) dollar tickets. You can also sit in that private section along the first baseline in the upper deck for $40, $50 on premium nights.

If you have a large group, there’s a pool and spa area you can rent out in center field starting at $35-40 per person (it also includes your food). There is also a plaza behind home plate that features a carousel for kids.

We had no problem just walking up to the ticket window and purchasing three tickets (one wheelchair, two companions) directly behind home plate for the Independence Day game with post game fireworks.

There are no bad seats here and the game views are excellent. Food choices are mostly the regular ballpark fare consisting of hot dogs, pizza, and burgers. Beer selection is rather pedestrian too with the most premium brew on tap being Tecate, but it is not expensive.

Very limited accessible bus service is provided by Fresno Area Express (FAX) with the downtown circulator trolley, which stops running at around game time, and the 38 bus, which runs late enough on weeknights but not on weekends. There are vast parking lots across the street on the third base side.

A good, competent ballpark…not a gem…but definitely a fun place to watch a ball game. 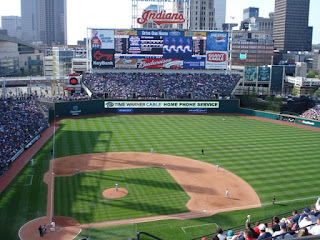 Fomerly know as "The Jake" - Jacobs Field - this stadium is home to the Indians.  The team has been in business for over 110 years and took the World Series in 1920 and 1948.  Since then, they've mostly been known as a hard-luck team, even a joke sometimes (see the great baseball comedy Major League for a good example).

They did have a good run in the mid 1990's when they had players like a young Manny Ramirez on the team.  In 1995, they were the American League representative to the World Series but lost to the Braves.

They returned in 1997 to face the Marlins and were two outs away from taking it, but closer Jose Mesa blew the save and the Indians lost game seven in the 11th inning.  This was a great series that we got to watch from a beachside bar in Puerto Vallarta...ahh, good times (see below)!  We had fun with you, Marlin Bob.

As of this update...June, 2013...the Indians are again in the hunt, only a game or two behind the Tigers in the Central Division. 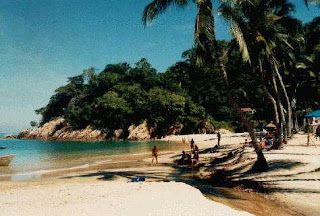 Progressive Field replaced Cleveland Stadium, which had been literally falling apart, in 1994.  It was initially named after the team's owner, Rich Jacobs.  In the midst of one of the team's greatest eras, the stadium sold out 455 consecutive games over a five year period.  Here are the stats:

In 2000, lawyer Larry Dolan bought the team.  With the Jacobs regime gone, there was no need to keep the name.  Naming rights were sold to Progressive Insurance in 2008.

Wheelchair locations abound throughout the stadium.  Also available are swivel seats to transfer into and aisle chairs with swing-away armrests.  Wheelchair and companion seats are sold on a first-come, first-served basis.  Ticket prices are dynamic...meaning whatever the market will bear putting the team in a position of scalper.  As of this writing, that means around $10 - $96.

Public transportation is available from the RTA which runs buses and trolleys to the stadium with a covered walkway available on game days from the nearest trolley station.

Unfortunately, we didn't get to see a game there when we were in Cleveland.  The Indians were in Anaheim at the time, taking on our home team, the Angels, so we can't speak to the game experience here but it sure looks like a nice place to see a baseball game.


Darryl
Copyright 2011 - Darryl Musick
All Rights Reserved
Posted by D. Musick at 4:30 AM No comments: Links to this post 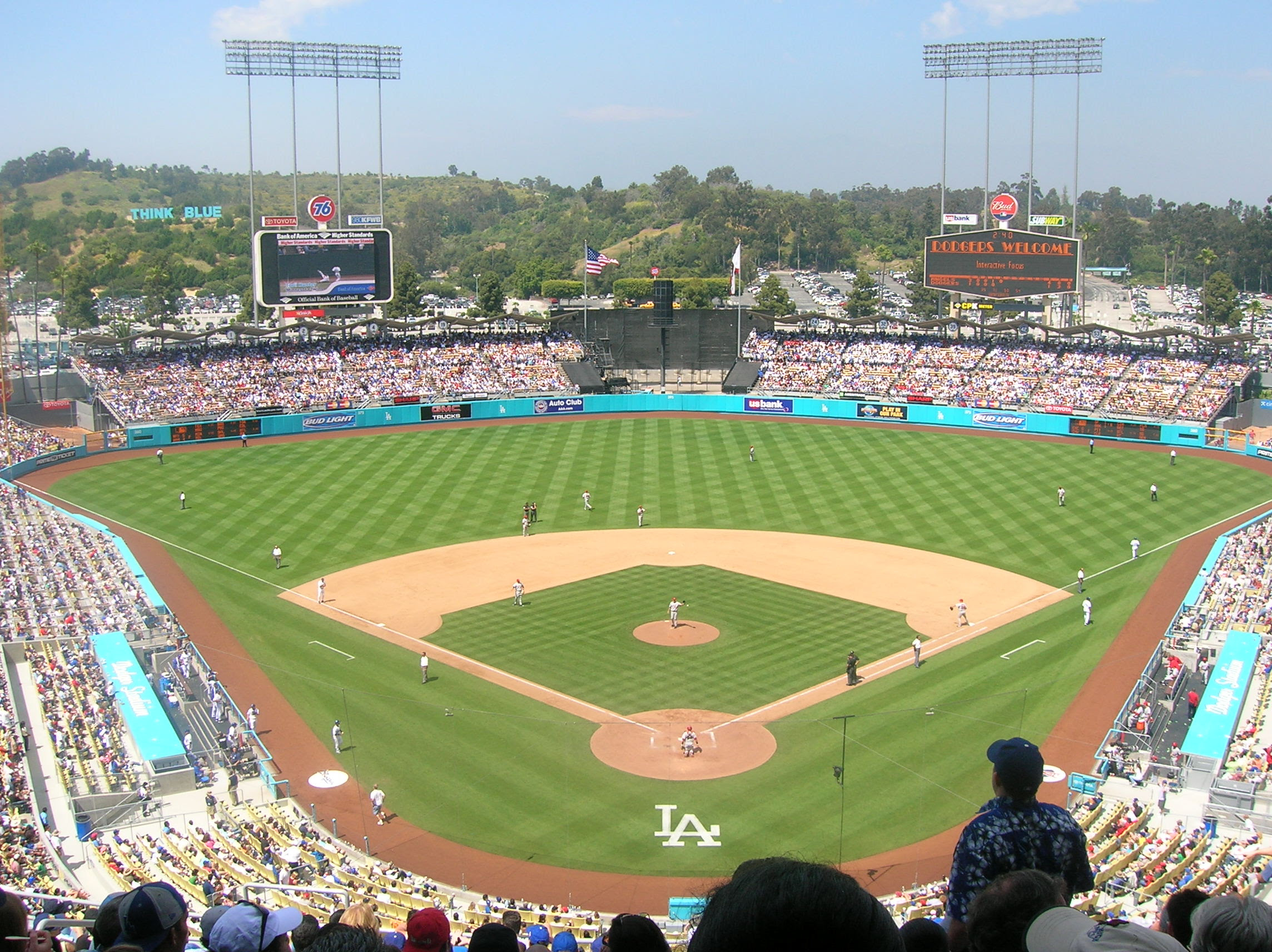 Los Angeles, and its neighbor to the south Anaheim, have the third and fourth oldest stadiums in baseball with Dodger Stadium opening in 1962 and Angel Stadium in 1965. They are two of the most wheelchair unfriendly stadiums in the major leagues. Angel Stadium will get its due, but today we’ll talk about Dodger Stadium, which sits at #16 on our list of stadiums.

Home to the Dodgers, who moved west in 1958 from Brooklyn, the stadium is visually striking…built into a natural bowl with views of the San Gabriel Mountains to the north, and downtown Los Angeles to the south. It is on top of a hill in Elysian Park, just above Chinatown and next to the police academy.

Here are the stats: 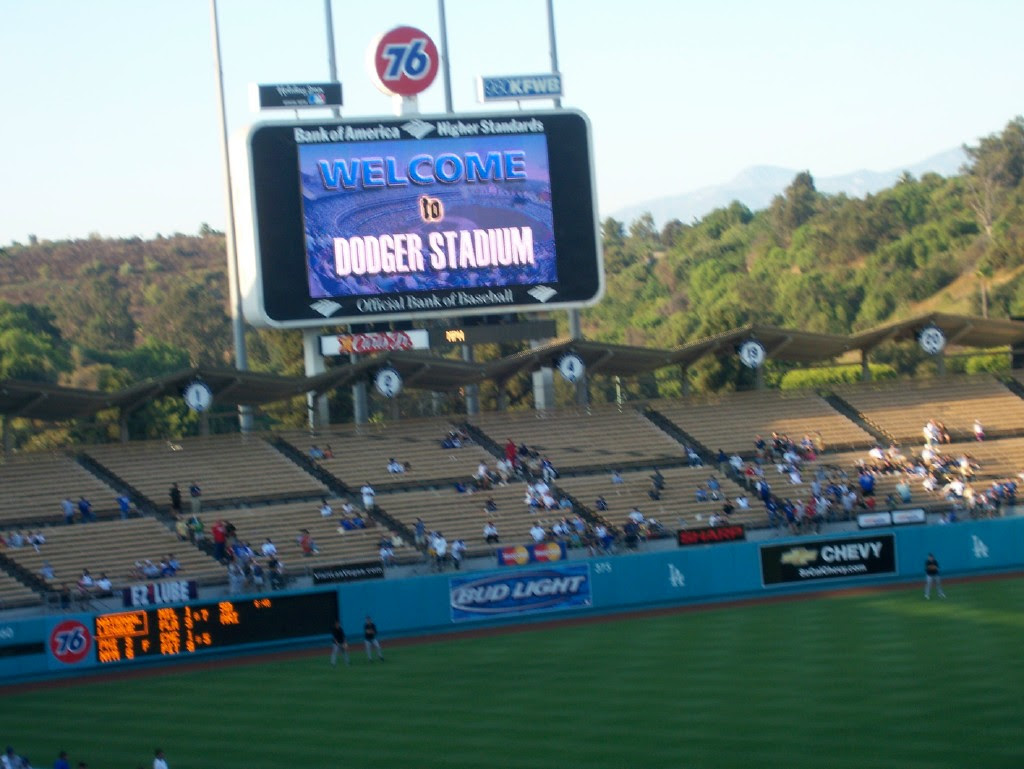 It may be old but it wears its age well, at least visually. Many partial rehabs have been done, most recently by former owner Frank McCourt adding premium seating behind home plate and around the dugouts. McCourt kept promising a $500 million rehab, but his divorce and his dispute with Major League Baseball kept that from happening.

The McCourts are just  bad memory now.  New ownership is in place via the Guggenheim Group that includes Stan Kasden and Magic Johnson. Paying way more than the team was valued...over $2 billion...it remains to see how their investment will pan out. The team is not doing real well in 2013.

Dodger Stadium is known for its harsh security measures. Beach balls are confiscated immediately and popped. You cannot wander around the stadium outside of the section you are sitting in. The riff-raff are zealously kept away from the beautiful people here. The stadium also has a reputation for violence in the stands and parking lot...a visiting paramedic from Palo Alto is permanently disabled due to a severe beating he took in the parking lot on opening day - and now has a $50 million lawsuit against the team for not providing enough security.

Ticket prices and concession prices had also steadily risen under the former management as have other snafus such as building high-priced baseline seats with poor views, a concession tent in the sun with no air conditioning, and paying a psychic six figures to beam good energy toward the team.

One of the first thing the new owners did is lower the parking price, infamously raised to $15 under the McCourt regime. It is not $10.  The Dodgers now use tiered pricing for tickets. The four tiers have tickets ranging from $8 in the upper deck to $160 for a field box seat.

Wheelchair seating is adequate and fairly easy to buy. Mostly around the top of the field section. The team’s web site is woefully inadequate for information, only letting you know that wheelchair escorting ushers and handicapped parking is available.

There is no regular public transit to the games but a shuttle serves the stadium from Union Station in downtown. If you have a ticket it's free, otherwise it's $1.50 each way.  It’s a long walk uphill from the nearest regular bus stop on Sunset Boulevard.

Food prices are expensive but they do have some variety such as sushi, garlic fries, etc. Their signature item…the Dodger Dog…is awful. The only thing going for it is that the sausage is longer than the bun. (I will give the Dodgers one thing in this area, though...as much as I don't like the food there, it is still miles ahead of the Angels whose food ranges from mediocre to inedible.)

Now that new management is in place, we've got to get back to the Ravine. Hopefully, we can add a current in-person report to this soon. Nice going, Dodgers...hope the future holds good things for you.