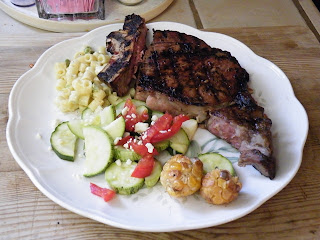 Today on The Cocktail Hour, we come back from our little summer hiatus with something a little different. Instead of a drink recipe or a drinking field trip, we’ll be talking about that great summer drinking activity, barbecuing, so put a couple of cold, refreshing brews on ice and join us on the patio (see the video for an example of the brews we’re having).

For our barbecue, we like to use a kettle grill such as a Weber because of the even heat distribution. And, yes, I’m going to call it barbecuing even though it’s kind of a mix of grilling and barbecuing that we do. 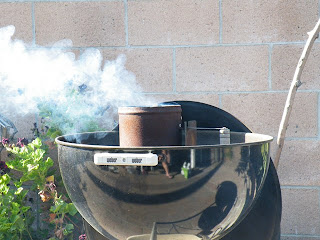 To start, I like to use a chimney charcoal starter. First, because it eliminated any flavor from lighter fluid; second, it’s better for the air especially in a place like here in the smoggy L.A. basin; and third, because it lets me play with fire. Take some old paper like newsprint, wrapping paper, or old utility bills and crinkle them up loosely in the bottom of the chimney. Fill the top with charcoal and light the paper. 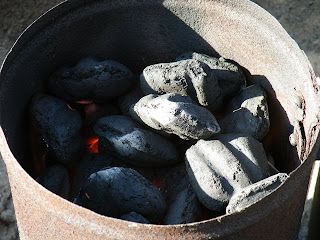 When the charcoal is ready, pour into one side of your barbecue. Spread it out evenly but keep it to one half of the grill only. Put the grilling grate on and let heat up for a few minutes. 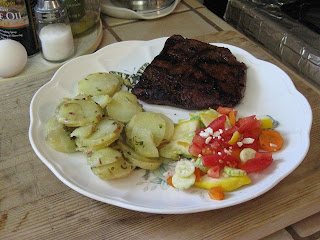 Once the grate has had a few minutes to heat up, clean it by scraping with a wire barbecue cleaning brush. 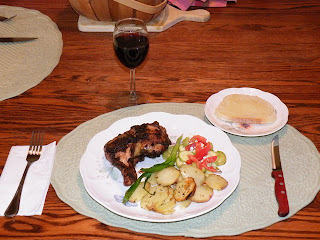 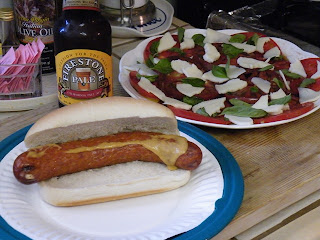 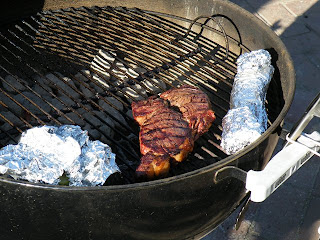 That’s it! Have fun, be careful, and enjoy the food and drink.

San Francisco is California’s most transit oriented city. It’s the nerve center of Northern California and many regional transportation systems converge here. The city itself is served mainly by Muni (San Francisco Municipal Railroad) and BART (Bay Area Rapid Transit) with robust commuter rail service provided by CalTrain. Regional operators Golden Gate Transit and AC Transit also provide bus service into the city from points beyond. A number of ferry operators also provide commuter service across the bay into San Francisco proper. More than a dozen different operators and agencies also provide bus and rail service outside of the city to points around the bay. 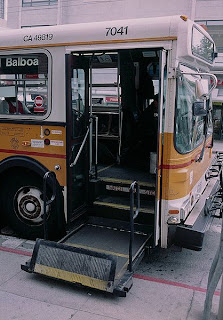 Picture courtesy of Wikimedia
Steve Morgan under CC-BY-SA license
BUSES – Buses run just about everywhere in the city and it seems like you’re never more than a block or two from a line. There are regular fuel powered buses along with overhead wire electrified trolley buses. All vehicles in the MUNI bus fleet are now accessible. Click the following link for a route map.

Bus fares are $2, $0.75 for disabled and seniors. Transfers are free and can be used for two more trip, including returning to your original destination as long as you do it before it expires (90 minutes from original issue). 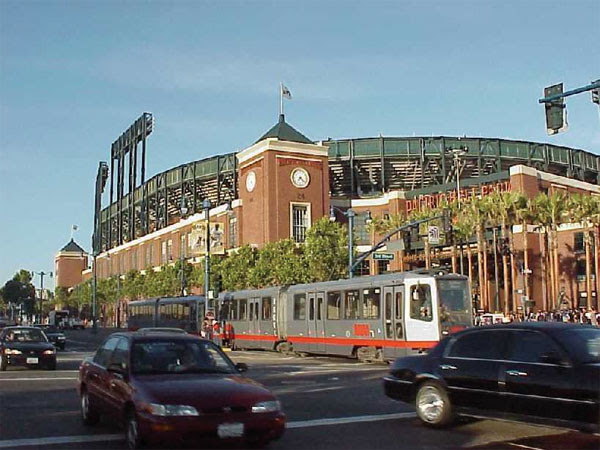 TROLLEYS – The trolley system here (not to be confused with the cable cars) runs down Market Street underground and to points beyond above ground. Historic trolleys…using restored antique trolley cars from around the world…run above ground on Market Street continuing on to Fisherman’s Wharf. All stations along Market Street are wheelchair accessible, both above and below ground. The historic streetcars are mostly accessible and stops either have ramps or embedded lifts that will raise your wheelchair up to door level when the car approaches. The T line is completely accessible, the J, K, L, M, and N lines are wheelchair accessible at designated stops only. See this link for a list and compare with this route map to see if your destination is served. If it can’t be done by trolley, chances are you can do it via the bus system. 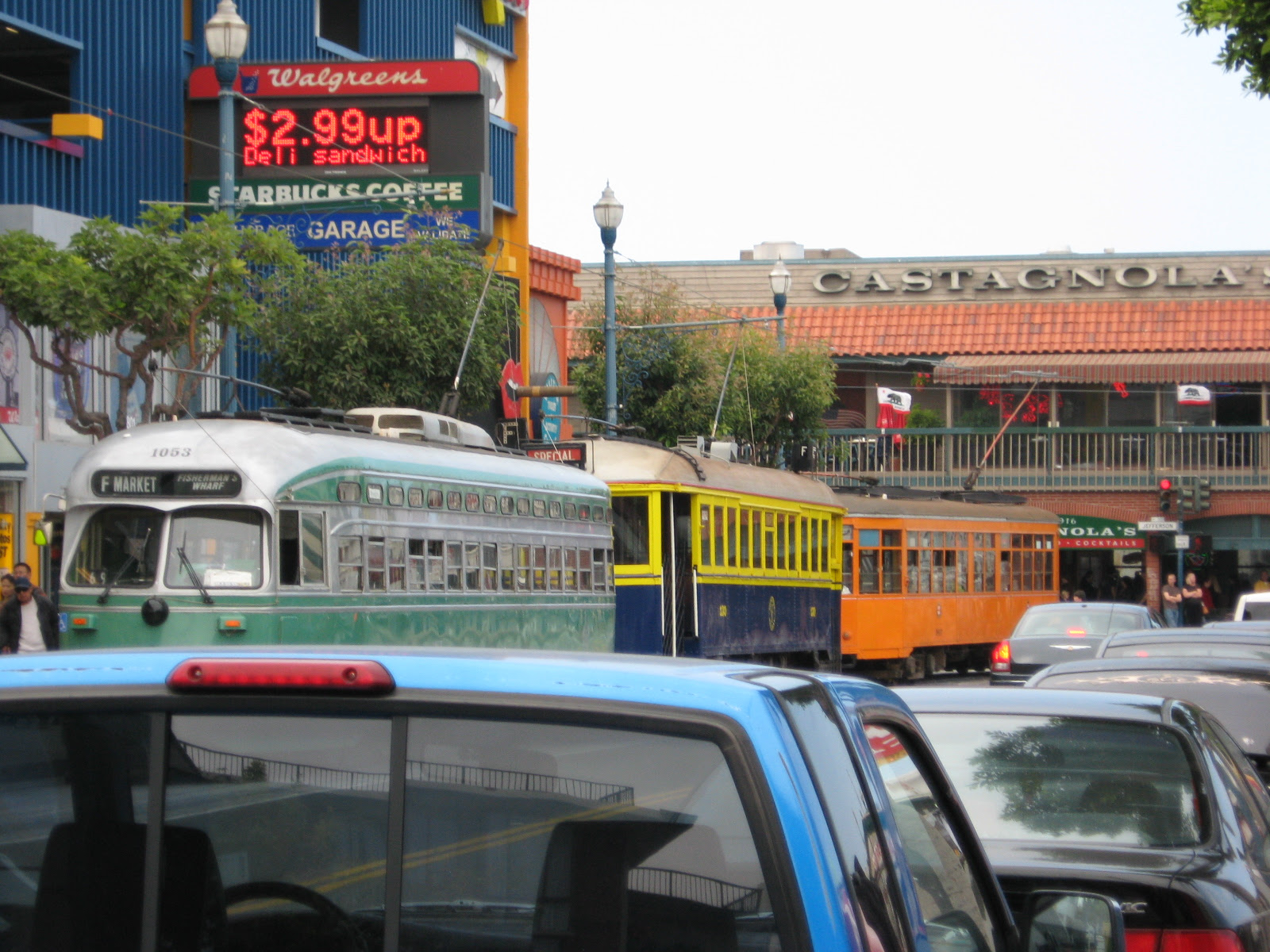 Trolley fares are the same as the bus fares. 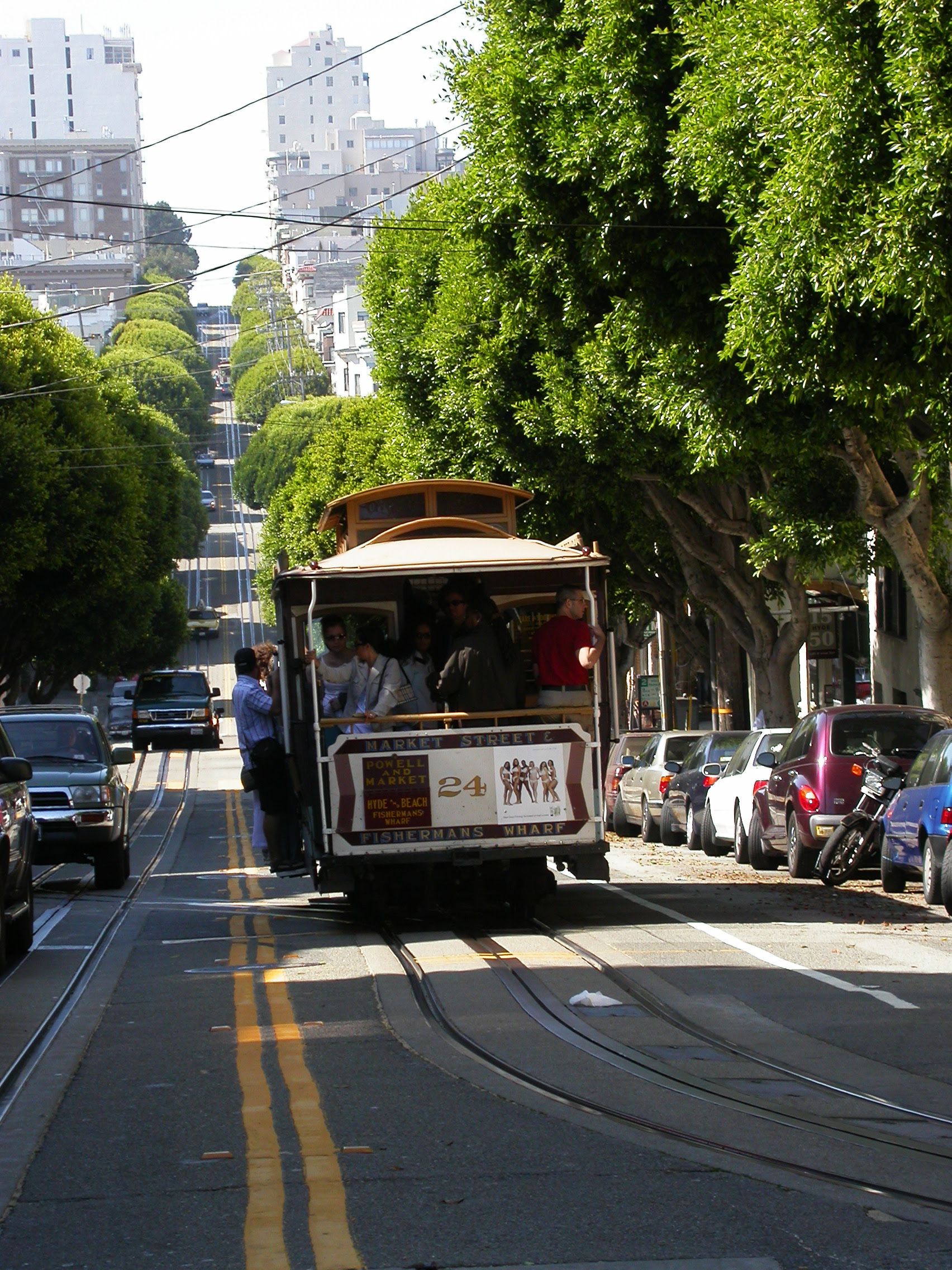 CABLE CARS – These are rolling historical landmarks and are not wheelchair accessible. If you do want to ride one, you’ll need to leave your chair behind. If you can walk a little bit, you can probably board. The cost is $5.

Visitors can purchase 1, 3, and 7 day passes that are good for unlimited rides on the entire system, including cable cars. The costs are $13, $20, and $26 respectively and are sold at various outlets throughout the city and the airport. Click the link to find sales locations. 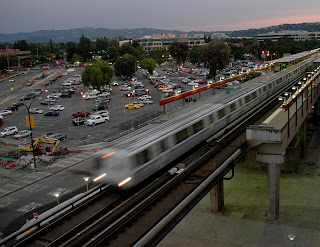 Photo courtesy of Wikimedia
Jon 'ShakataGaNai' Davis under CC-BY-SA license
BART is a heavy-rail system that works as commuter rail from points in the East Bay and the airport. It runs as a subway under Market Street. All lines converge here from Millbrae and the airport in the south and Fremont, Dublin/Pleasanton, Pittsburgh, and Richmond in the East Bay. The complete system and all stations are wheelchair accessible. Fares are distance based and run from $1.75 to $7.05 one way.

One word of concern about MUNI and BART – our experience with several of their station employees and drivers were the worst encounters we’ve ever had from transit employees that included being yelled at for a) asking a question, b) going the wrong way, and c) not knowing the name of the stop we wanted to get off at. Be prepared, they may get you where you’re going but not always with a smile.

Photo courtesy of Wikimedia
Chris Enright under CC-BY-SA license
CALTRAIN is a commuter rail line that runs along the West Bay peninsula from San Jose, and Gilroy just a little bit, to the San Francisco station just a few blocks south of Market Street. There are stations along the way in places like Santa Clara, Sunnyvale, Palo Alto, Mountain View, Redwood City, San Mateo, and South San Francisco. The passenger cars are double-deckers with wheelchairs riding on the bottom level. Each station has a wheelchair ramp built into the platform, chair users should wait on top to board the train…the conductor will deploy a ramp to get you in. Fares are distance based from a low of $2.50 one-way for one zone to a high of $11.25 for six zones. A day pass is available for twice the amount of a one-way ticket, disabled and senior riders pay half price.

FERRIES are operated by several companies and cruise into the city from Alameda, Oakland, Vallejo, Tiburon, and Sausalito. Fares start at $6.50 and disabled are half-price. All are wheelchair accessible.

AC Transit runs buses from Oakland and the East Bay and Golden Gate Transit from Marin County. All buses are wheelchair accessible.

A multitude of agencies run buses, trains, and ferries to other parts of the bay area that don’t come into San Francisco. For complete information about these agencies, plus the ferries and commuter buses, go to transit.511.org for complete transit information for the area.

San Francisco is one of the world’s premiere travel destinations and is very easy to see in a wheelchair. Have fun.