Fightin' the Man: A Tale of an ADA Dispute in Southern California 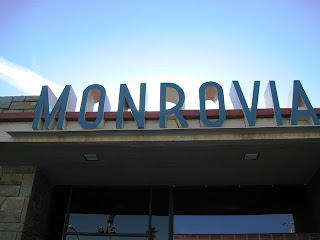 Monrovia is a pretty little town about 15 miles northeast of downtown Los Angeles. It’s not on a lot of tourist’s radar, which is a shame, but should be. The city is known for its immaculate craftsman and Victorian style homes. Writer Upton Sinclair had a beautiful Mediterranean style villa.  Film companies flock here to shoot in the city’s downtown area on Myrtle Avenue that stands in for the typical “Main Street, America” look. 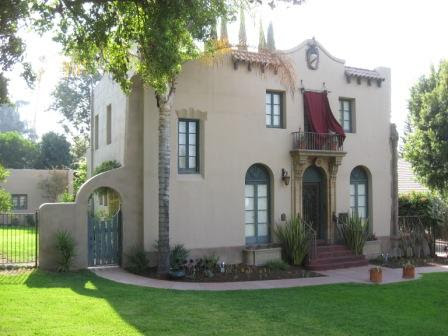 
That All-American, Main Street feel extends to the festival and farmer’s market that takes place here every Friday night along Myrtle Avenue.


We have to come here each Friday night for physical therapy for Tim. The adjacent festival makes it easy to step out afterward for dinner and browsing. 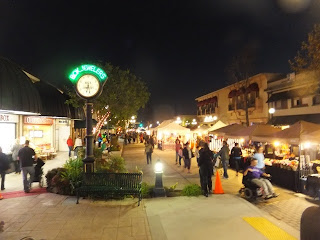 There are three restaurants we rotate through on a weekly basis on each corner of the heart of the festival, the intersection of Myrtle Avenue and Colorado Boulevard. The fourth corner is a bank but we’d love someone to open a nice place to eat there so we can have a full rotation.  I digress…

One Friday night a few months ago, we finished our workout. As Tim does his therapy, Letty and I make use of the time to work out in the gym. Afterward, we make our way over to the corner to take advantage of T. Phillips’ 72 taps and Happy Hour appetizer prices for dinner only to encounter a dismal sight.

One of the vendor booths for the festival has set up shop directly on the wheelchair ramp and curb cut blocking the access to the entrance. 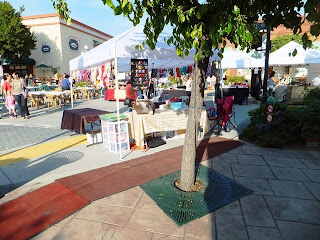 I asked the vendor why they were there, blocking our way. He told me that the people running the festival told him to set up there. The vendor moved some of their merchandise to create a wide enough path for Tim to get through while I found one of the security guards for the festival.

He told me I’d have to take it up with the festival manager who was nowhere to be found at this moment.

I left him with the message that this was illegal and the booth had better not be there next week.


Fast forward to the next week. After the workout, we again go to our dinner corner. This week there wasn’t one booth blocking the curb cut…now there were two booths blocking two corners.


Seething, we set down to eat but I kept an eye out the window. I know that the mayor and city council members are frequent visitors to the festival so I want to find one and complain.

No mayor or councilmembers showed but the manager of the festival was walking by. 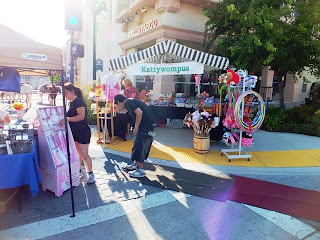 I left our table and found him at one of the booths blocking the way.


I greeted him and introduced myself to him as nicely as I could and said “you can’t block the ramp like this, there are several people here in wheelchairs that need this access.”


His first response was “yes I can because I leave four feet on the side.”

My response was “no you can’t because that four feet is sloped sideways and a wheelchair user would feel like they’re tipping over.”

The next reason was “yes I can because we’re not a permanent fixture here, we’re only temporary.”

I admit it was a bit tough to debate without the law in hand or an expert grasp of it but I bluffed ahead anyway…”I don’t see how a festival that is here every single Friday night of the year is not permanent. I want you to clear these ramps and if I don’t see them clear next week I will take this to the mayor and city council.”

We left it when he told me not to worry and he’d take care of it.

Another week goes by, another session of therapy, and another workout.  Dinner afterward.
Two corners blocked by the same vendor booths.

OK, now it’s time to follow through on my promise…