Citizen’s Bank Park is the home of the Philadelphia Phillies and replaces the now demolished Veteran’s Stadium, which they shared with the Eagles football team.  It sits south of downtown in the Sports Complex along with Lincoln Financial Field (football) and the Wells Fargo Center (hockey and basketball).

The Phillies have a long history.  The team has been here, in this incarnation, since 1883.  The name is short for the “Philadelphians.”  The team has had highs and lows.  It won the World Series in 1980 and 2008, most recently against the Joe Maddon led Tampa Bay Rays.   The team also holds the record for the most games lost by any MLB team.  Many baseball legends have played here; Steve Carlton, Larry Bowa, Mike Schmidt, Pete Rose, Casey Stengel, Sparky Anderson, Joe Morgan, and Ryne Sandberg are among the big names that have graced the rosters.  In 2012, you can watch such star players at Ryan Howard, Jimmy Rollins, Cole Hamels, Chase Utley and Cliff Lee play.

Right now, in August of 2013, the Phillies are in third place but it's a low third place, 15.5 games behind the Nationals and the Braves in the Nationals League's eastern division.
Here are the stats…

Citzen’s Bank Park seems like a large stadium when you’re inside, a feature it shares with parks such as Los Angeles, St. Louis, and San Francisco.   This is not an intimate feeling stadium, yet the staff and fans are very welcoming and become temporary friends for a few hours.  It’s a hitter-friendly park, too, second only to Yankee Stadium for the number of home runs given up.
The seating bowl features three larger decks and a small level of suites.  It can get pretty hot here in the summer, so most fans like to sit in the upper reaches of the decks to take advantage of the shade…you’ll see a lot of people from the lower parts of the decks head to the open concourse on a hot day. 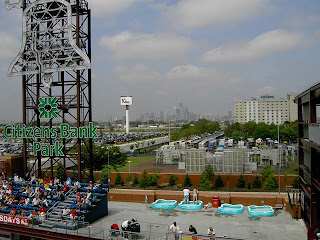 Seating in the outfield has several levels, from cheap bleacher seats to a private party deck filled with inflatable pools.  Ticket prices run from $14 to $80.  Decent prices for a lot of the seats but lacking in the truly “cheap seats.”  Call (215-463-1000) for accessible seating. 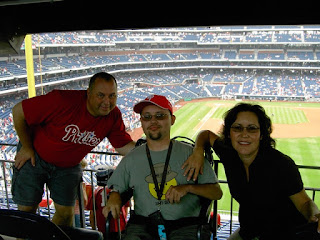 Handicapped seating is bountiful and spread throughout all levels.  No problems with buying extra companion seats.
The stadium is well served by accessible subway and bus transit.  It is also surrounded by vast fields of parking lot. 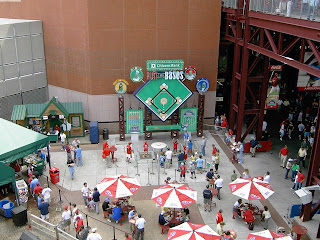 Food is mainly regular ballpark fare with hot dogs, pizza and the like but it is high quality and tasty.  A few different foods are available, such as the Schmitter…a cheese steak with salami, tomatoes, special sauce, all on a Kaiser roll.  Pre-packaged vegan fare and sushi are available at the South Philadelphia Market convenience store locations scattered around the park.
There is a large selection of draft beers available at average ballpark prices. 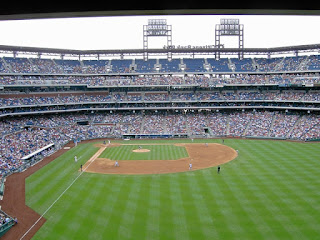 The game experience is very good here.  The views are excellent with no obstructions.  Staff is very friendly and helpful.  It is also one of the few stadiums that do not allow fans to return to their seats during game play…you must wait for a dead ball to go back.  For wheelchair users, they enforce the clear area around the wheelchair seats so people don’t use your personal space as a “standing room only” zone like they do at many parks.

The local fans are also very friendly and are happy to talk baseball, the Phillies, your home team, and your trip.
What is great about this stadium is decent food, great beer selection, friendly people, good views, and an exciting team to watch.  What could be better?  A more intimate feel, lower ticket prices in the nosebleeds and bleachers, and be closer to downtown.
All-in-all, a great stadium that leads the rest of the pack under our top three modern era stadiums.  .