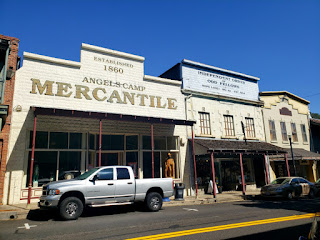 Henry Angell set up a tent camp along the creek that sort of carries his name today back in 1848, selling supplies to miners along the creek. The placer deposits gave out in a few years but hard rock mining of the gold bearing quartz commenced after that.

The town was named for Henry but dropped the second "L" becoming Angels. It was incorporated in 1912 and eventually had the word "Camp" added to it.

Angels Camp is the only incorporated city in Calaveras County.

While nearby San Andreas is the official county seat, Angels Camp is the real hub of the county. It's arguably the most famous of the Gold Rush towns of California. It was here that a young Samuel Clemens...Mark Twain...heard a story of a frog trained to jump over drinks at a local tavern. Of course, that story became "The Celebrated Jumping Frog of Calaveras County," which was published in The New York Saturday Press in 1865 launching him onto a legendary writing career and starting a local legend of its own. 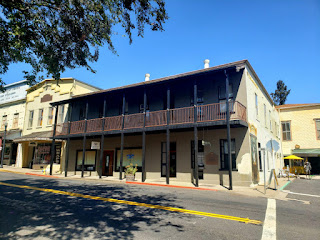 That tavern is gone but the building remains.

Each May, this is celebrated at the county fair with several days of frog jumping competition at the central stage of the Frogtown fairgrounds on the south end of town.

If you're there at the proper time, you can experience this small county fair in person. The grounds are not as crowded as you'd imagine but it is spread out over a lot of hilly acres. Paved paths will get you to wherever you want to go but there will be some climbing to do.

At the frog jumping stage itself, accessible spots for wheelchairs are down in the front row. There is precious little shade to sit under while watching so a hat or umbrella would come in handy. There are a couple of trees on the hillside, above, where you can watch in the shade but it would take some hard work to get your wheelchair over the grassy elevation to get there.

Other than the frog jumping, it's your typical county fair with exhibit halls, wildly unhealty food, animals, and carnival rides. Something we love to do and it's a nice, inexpensive day out. 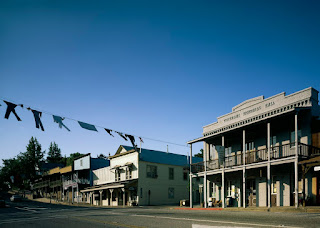 During the fair, locals compete to see who can come up with the most interesting lines of laundry and hang them across Main Street as a display.

Outside of the fair, the small and quiet downtown makes for a nice stroll. Numerous trees provide welcome shade and, unlike many other old towns around here, wheelchairs have access to all parts of the sidewalk. 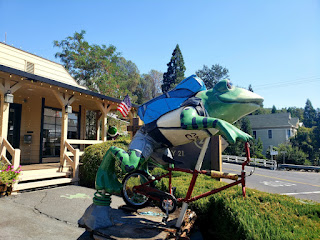 Vendors cater to tourists with many frog related items but most visitors bypass Angels Camp for the more geared-for-tourists Murphys up the road. 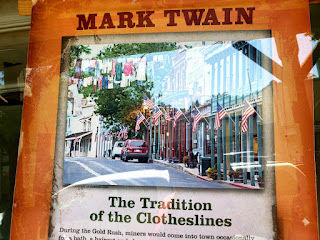 Plaques on the sidewalk honor frogs and their "jockeys" with a frog jump walk of fame. Posters in the windows of vacant shops tell the story of the history of the town.

One of our favorite places to eat, the Pickle Porch, slings out some of the best tri tip you'll find but in deli style sandwiches, not hot plates. 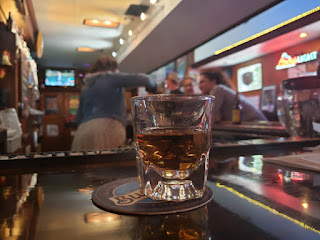 My Bar is a fine example of a Gold Country dive bar and a friendly place to get a drink. 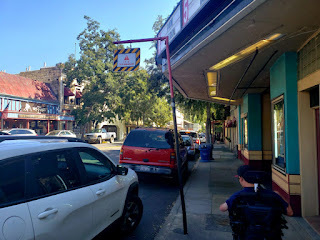 The old movie theater has been turned into a multiplex and screens the latest films. 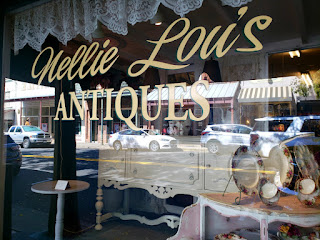 Beyond that, you'll find the usual assortment of antique shops and boutiques and Utica Park at the north end of downtown is a great place to have a picnic. On Fridays during the summer, you can find a farmer's market here.

Outside of the downtown section, you find more modern shopping conveniences like McDonalds, pizza parlors, supermarket, hardware stores and more. It's also a crossroads where you can turn off and cross the Sierras on Ebbetts Pass (highway 4) in the warmer months...the road closes during winter. 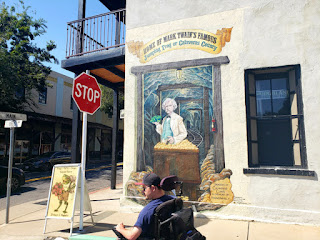 Spend a few hours or even overnight in one of the several motels here and you can get a glimpse of what life was like for those early miners and Mark Twain.