We've had marvelous weather in Nova Scotia since the fog of the first day lifted. Daytime highs of around 70 degrees, sunny, with a slight breeze. That's about to change.

Just before we left, Hurricane Dorian pummeled and devastated the Bahamas on its course through the Caribbean. As of this writing, 58 people have been killed, more than 600 are still missing, and some endangered species...like the Bahamas nuthatch...are now believed to be extinct after the storm.

Dorian left the Caribbean, headed out to sea, and is now headed north. Looking at the track on the weather map, we can see a dot right smack in the middle of the storm's path...the next landfall will be Halifax. 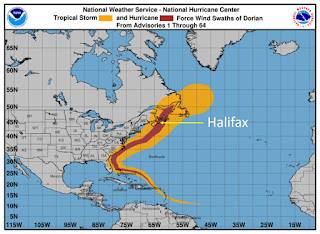 We are going to experience our first hurricane.

Walking along the waterfront, we see changes. The floating pedestrian bridge is gone, it's been stowed away for the storm. A parade of Navy ships are headed out of the harbor from the big base here. They're headed to safer waters for the duration. Cranes are being lowered. The ferries have stopped running. Waterfront restaurants are boarding up their windows and, in our hotel, dozens of cots have been set out in the conference room to accommodate employees who can't go home and stranded guests who can't leave.

It's Saturday morning. On the news, the storm is expected to make landfall sometime in the afternoon. We head to a nearby convenience store to load up on snacks and drinks to hold us over until the storm passes. We each get a microwavable dinner from the hotel's lobby shop to have some nutrition to go with it.

Then, we get comfortable in the room. We're hunkering down, waiting for the storm, and will not be leaving the hotel until it's gone.

A consideration for us is that our room is on the 10th floor. We visit with the manager to see if we need to be concerned. We're told that all should be well, the hotel (Homewood Suites) has plenty of backup generator power and the elevators will still be running in the case that the local power goes out.

Now we wait...as long as the cable TV, lights, and internet hold out, we'll be good. Hopefully, the large windows will remain intact as well. 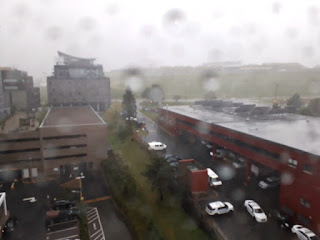 Mid afternoon, the rain starts. Not long after that the wind kicks up. Soon, we also have snow that is blowing sideways. The snow doesn't last long and then the rain comes in sheets with 80-90 mile per hour sustained winds.

Hurricane Dorian has arrived. A category 1 storm, just enough to be a hurricane, but not the category 5 that hit the Caribbean, thank God.

The windows shake...even the building shakes with the buffeting of the winds. I make a quick trip to the lobby just to take a little video of the storm for posterity. No way I'm going beyond the front door.

Back upstairs, now and again, the internet and cable go out. Just for a few minutes at a time. The lights flicker now and again but no sustained power interruptions. If you're our friends on Facebook, we apologize for all the silly posts...mainly, we were bored.

We're lucky...the neighborhood around us is lights out and the area to the east of us would not see a flicker of electricity for three more days.

By 10 o'clock that night, the winds have died down and now it's just a steady rain. 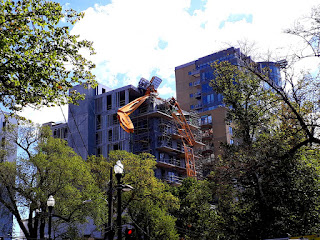 Halifax was very lucky...no one died, no major injuries. A crane toppled onto an empty apartment building under construction, hundreds of trees were taken out, windows broken, and hundreds of thousands of Nova Scotians were without power for several days. Minor inconveniences in the big scheme of things.

Some things we planned to do will either have to be modified or scrubbed but now it's time to count our blessings and continue our trip.