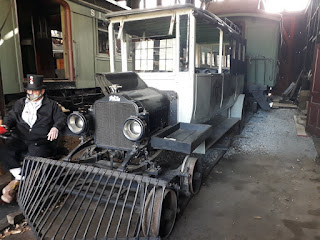 Update (August 2021): The original post, below, was written while Covid restrictions were a bit more harsh than they are today. Now that the state has reopened a bit, the trains are running in Jamestown again.
We went on a Sunday, where a diesel switching engine is employed to pull the passenger cars. If you go on a Saturday, you can ride behind a steam locomotive.
While the official line of the museum is that you have to call ahead to make arrangements for a wheelchair, in practice, it's not really necessary. I called ahead of time and was told to just let them know when we got there.
Once we picked up our tickets at the will call window (same as the regular ticket window), a volunteer came out to measure Tim's wheelchair. It passed the inspection. If not, you can transfer into a museum-provided manual chair to ride in. 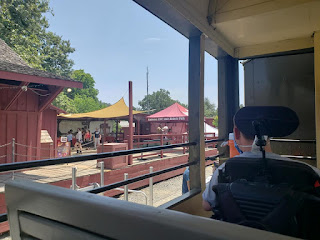 A manual, hand-cranked lift is employed to lift the chair into the doorway of the train. I can see why they measure because the clearances are very tight. Tim couldn't fit into the doorway of the car they wanted him to go it by about a quarter of an inch. Luckily, he could just go the other way and fit through the door of the adjacent car.
The tour takes you out about a mile or two to Wood's Creek, where the local gold discovery took place. 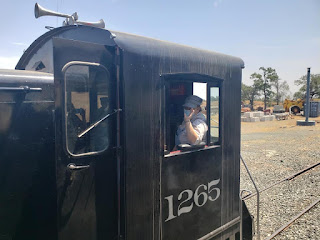 At the end of the outbound journey, the locomotive is detached and moved to the other end of the train for the trip back. 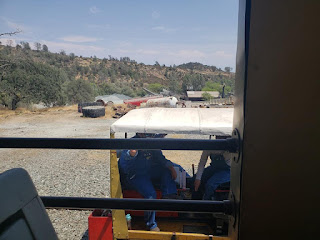 A railroad maintenance car (commonly called a speeder) follows the train looking for any railroad ties that might have caught on fire. 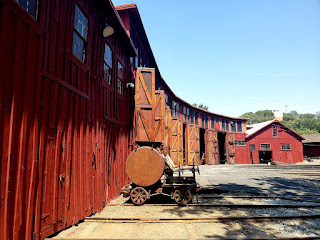 The entire journey is a little less than an hour and includes a guided tour of the roundhouse at the end. 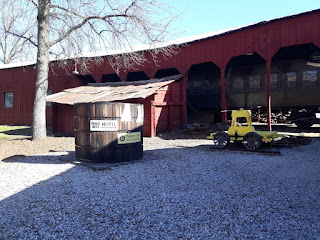 People of a certain age (like me) will remember those lyrics from the opening credits of the sitcom Petticoat Junction, a part of a trio of "rural" themed comedies along with The Beverly Hillbillies and Green Acres.

The opening featured the Hooterville Express train that connected the towns in the series. The train and the area used in filming is located right here in Jamestown, a Gold Rush era town in California's Tuolumne County. 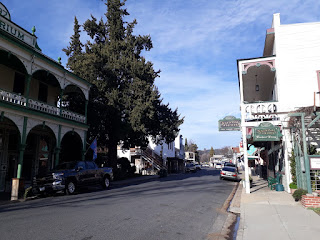 Jamestown is a small, unicorporated town that lives in the shadow of it's bigger and more famous nearby neighbors, Columbia and Sonora (which is the county seat). The population is growing and, at almost 3,500, is almost up to the historic peak population of 4,000 during the height of the Rush after a period of decline.

Founded in 1848, gold was discovered one mile west at Woods Creek. Colonel George James, a local merchant, was elected Alcalde (it was recently part of Mexico and they still used the Spanish titles at the time) and the town was named after him.

In 1897, the railroad came into town to haul lumber for local lumber companies. A large roundhouse and turntable were built in 1910 and is one of the few operating examples left in the country.

In 1929, the movie The Virginian was filmed here starting a long history of the railroad being used in the movie and TV industries. Credits include Back to the Future Part III, The Wild, Wild West, and Little House on the Prairie.

The railroad was made a California Historical Landmark and State Park in 1992 and is part of the California State Railroad Museum in Sacramento. The Sierra Northern Railroad continues to operate freight operations between Jamestown and Oakdale where it connects to the Union Pacific system.

Our visit starts with a trip to the state park, which is called Railtown 1897 State Historic Park. While we can visit and explore the grounds, the Covid restrictions are still in place and no train rides are operating. However, as time has passed since our visit and publication, the trains are running again.

Wheelchair users can ride the train, call the park at (209) 984-3953 a couple of days ahead of time to arrange it. Excursion rides take place on weekends and on select Wednesdays through the summer. 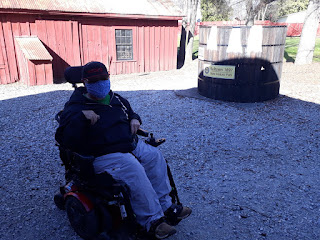 It's midweek, the pandemic restrictions are still pretty much in effect, so...besides the staff...it's just the three of us here today. We head over to the roundhouse where a docent is happy to have someone to show around. 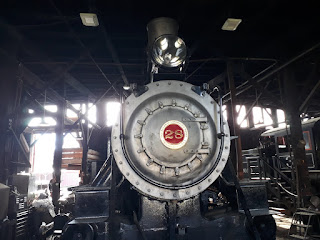 We're shown some of the famous movie locomotives, including the Petticoat Junction and Back to the Future trains, and taken over to a barn full of props. 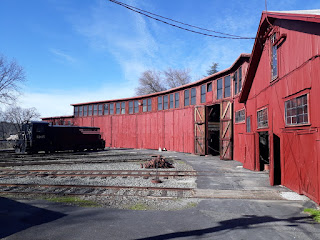 Outside, we see the turntable, then over to the tracks where the trains run in better times before heading back into the station and gift shop.

Downtown Jamestown is just a couple of blocks away. We while away some timein the antique shops, a candy store, and a mining supply store where you can pan for gold then buy the pan. 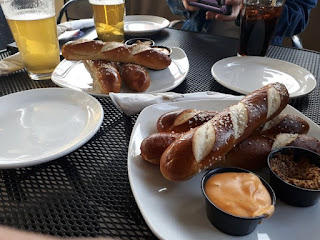 Dining rooms are still closed but we can eat outside. The Service Station has a beer garden out back where we have some delicious, hot pretzels along with some cold beer.

A central parking lot in town provides a nice place to park along with holding the town's old jail. 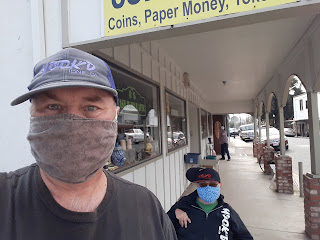 While Letty spends some more time shopping, Tim and I wander down the short main street, checking out old buildings and getting ideas for restaurants when everything is open again.

It's a sleepy town while we're there but now the state is more or less open again. The trains are running and the dining rooms are open.

Jamestown makes a great place to spend a day, especially as a side trip while visiting Columbia and Sonora.