Rolling on the River: Exploring the Sacramento River Delta 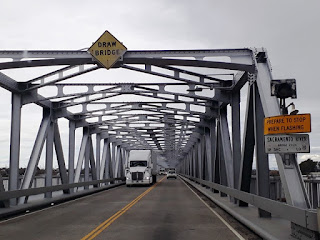 The farmland rolls away as far as the eye can see. Lazy, seemingly pristine waterways snake through the region, hemmed in by levees to protect the valuable crops below. Grapes ferment in barns while visitors sip tastes in local tasting rooms.

This bucolic area between California's capitol and the coastal mountains blocking the bay area belies it's importance to this very heavily populated state...it is the main water valve for fresh water for the entire state.

It's also very environmentally sensitive. Take too much water from the rivers that drain into it and you get salt water from the ocean seeping in, affecting crops, migrating fish and birds, and poisoning the soil. This is magnified during drought years and deferred maintenance on the levees, canals, and pumps can also wreak havoc.

Today, we'll leave the controversy behind to spend time we've never had to finally explore this region a little deeper. 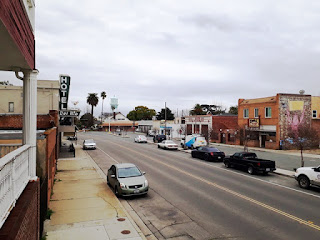 Our first stop will be to get sustenance for the day. There are a number of old little towns, below the adjacent waterways and protected by levees in the region. Isleton was founded in 1874 with wharf as a steamboat stop between San Francisco and Sacramento.

It was (and is) a heavily agricultural region and, soon, canneries opened up with a 90% Asian workforce. Divided into mostly Chinese and Japanese neighborhoods, you can still see that influence today in the small downtown that looks like a preserved Gold Rush era Chinatown.

Many of the Asian-American families here have roots in the town going back over a century. 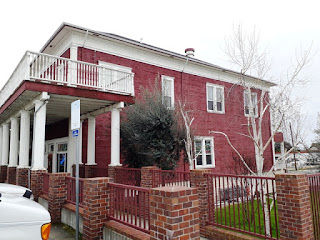 Peter Low and his wife, Yee, don't go back that far. It hasn't been quite 40 years since he immigrated from Canton, China and became a dishwasher at the town's Hotel Del Rio. He developed quite a knack for making prime rib and eventually opened his own place two doors down, Peter's Steakhouse.

That's where we're having lunch today. 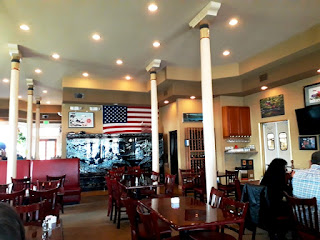 We enter through the accessible back door by the bar, steps away from the top of the levee. The first floor dining room opens up beyond that and we select a nice table near the front. In summer months, there is an outdoor deck to dine on with great views of the river and the delta beyond. The restaurant has installed an elevator so that guests with mobility issues can access the upper floor, too. 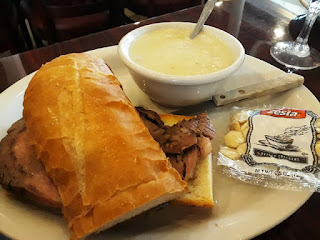 Letty gets a prime rib sandwich while Tim and I each get a prime rib dip. Ours came with fries while my wife went with the clam chowder option. It's all very good but Letty says the chowder is just "ok."

Back in the van, we head over to nearby highway 12 and make a stop at the Delta Farmer's Market. This year-round produce stand benefits the Discover the Delta Foundation. 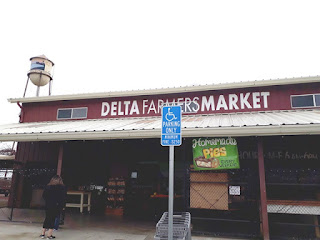 On this winter day, there's not a lot of fruit...some citrus and grapes, mostly...but there is a lot of veggies and baked goods. We pick up some oranges, mandarins, and snacks for later.

Back on highway 12, we cross the Rio Vista drawbridge where large container ships come in from San Francisco Bay to unload in the Port of Stockton. Keep going, and you'll eventually end up at the Jelly Belly factory in Fairfield but we're turning right on highway 84 at the other end of the bridge. 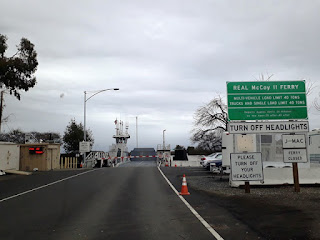 Continuing on highway 84, eventually we come to the Real McCoy. It's part of the highway but it's a ferry...one of only two publicly operated river ferries left in the state of California. The other is the J-Mac, on the other side of Ryer Island (where the ferry we're on is taking us) but we'll have to be content with this one as the J-Mac is out of service today. 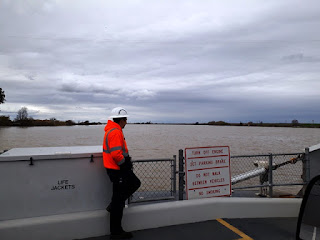 The Real McCoy operates every 20 minutes so we wait our turn for about 7 minutes before boarding. It's a quick, free trip to the other bank of the river.

Now, it's a somewhat hair-raising drive on narrow, winding, levee top roads until we get to Clarksburg and a stop at Bogle Vineyards to taste some wine and pick up a few bottles for home. 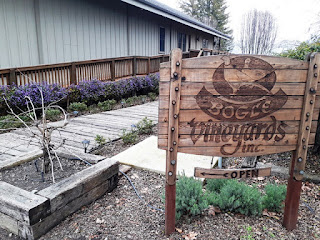 This used to be a reliable, free tasting room but now charges $8 per person for tasting...refundable if you buy at least $20 for each. We negate this a bit by sharing sips from one tasting glass and then buy a few of the moderately price bottles to meet the threshold.

It's also a good stop for accessible bathrooms and there's a lovely picnic area outside by the grapevines if the weather's cooperating.

With that, our day out on the Delta is over and it's time to head back home.