Sacramento and the Gold Country, California 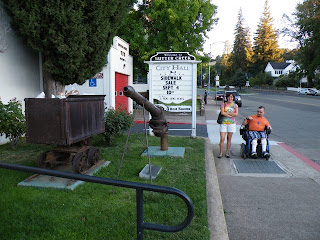 (Please read our Covid 19 Statement first - Ed)  When traveling, the question is “fly or drive?”  Today, we are traveling to Sacramento from the Pasadena, California area…a distance of 407 miles.  Flying time would be an hour.  Arriving at the airport, an hour before takeoff.  Being with a wheelchair, add another hour to that to make sure airline and airport staff can get you on the plane and seated together.  Another 40 minutes to an hour to drive to the airport, then a half hour to collect your baggage and another to get to the hotel…if it is nearby.  You might also need to rent a car if public transit options are not suitable (but in Sacramento, they are pretty good).

Watch the Video of This Trip!

So, we’re talking about an investment of five hours…at least…and around $350 for three people flying.  The drive is six hours…not counting food, fuel, and bathroom stops…plus you can easily take your power chair and have your car with you when you get there.  Gas would be about $150.  Road trip it is!

Today’s drive is uneventful with stops in Bakersfield for the delectable tacos at Los Tacos de Huicho and then again at the Love’s gas station in Ripon for fuel, bathroom, and snacks.  I have credit for a free night at Marriott, so we cash them in at the Springhill Suites just north of downtown Sacramento.
We have an accessible room, which here means a bathtub with shower bench.  Roll-in showers are available but you give up the living room of the suite to get one.  With the bench, I can easily transfer Tim, give him a shower, keep the living room space, and save the roll-in for someone who needs it more.  A roll-in would be a little more convenient, but…for me…I give up too much for the trade off here.

But…there’s no bench in the shower.  I bring this up to the front desk’s attention.  There is another room with a shower bench and they want to move us there.  I ask, “why don’t you just bring to bench to our room?”  The manager says it has to go into an accessible room only.  I tell her that we are in an accessible room but she still insists we need to move.  Some back and forth, including taking her up to our accessible room to prove it, and she finally relents.  It turns out our room had a bench but whoever had the room before us took it with them.

Please, people…leave the stuff in the room.  Someone, maybe you someday, is going to be in a situation where you need it and it won’t be there because you were selfish.

Once that’s settled, we have a nice room and have dinner before bedding down for the night.

The next day, we head over to West Sacramento and Raley Field, home of the River Cats.  The River Cats are the AAA minor league team affiliated with the Oakland A’s that play here.  Being baseball fans, we take in games at new stadiums a lot on our travels (see our Fields of Dreams page for reviews).

We park the van behind the home plate entrance and the happy parking attendant gives us several little packages of Jelly Bellies to take in with us.  We get here early because we don’t have tickets yet and want to get the best seats we can.  Unfortunately, there are not too many wheelchair accessible seats left so we have to settle for seats on the first base side but out a bit in right field. 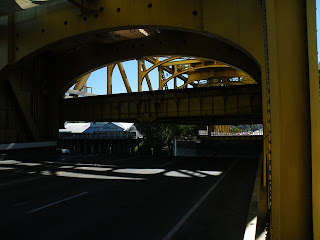 Since we’re early, we walk over the nearby Tower Bridge.  This shimmering, golden bridge has an accessible walkway on its south side.  Just as we start to cross, a siren erupts and lights flash.  The drawbridge is about to be raised. 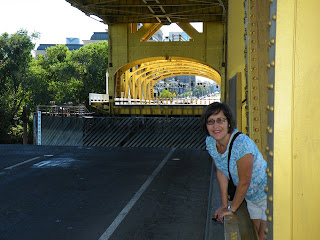 We get as close as we can get and watch the deck go up.  No boats are in view, so I guess that they just raise the bridge every morning at 10:00.  I’ve seen other drawbridges where this is the case…if you’re in a boat, you just want to make sure you’re there at that time. 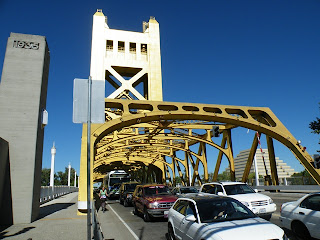 Just a few minutes later, the deck comes down and we complete the crossing. 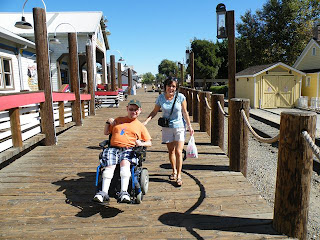 On the other side is Old Sacramento State Park, a preserved neighborhood of historic buildings on the edge of the Sacramento River.  We spend some time eating the free samples at Candy Heaven, a large candy store on the edge of the area that has just about any candy you can think of.  Letty buys some candy to take with us and we take just a quick walk through this end of the park before walking back. 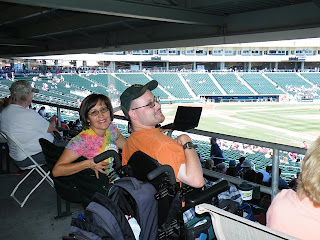 The game is a lot of fun and our seats are next to a lemonade and churro stand.  I make use of it to get Tim a drink and a bag of their kettle corn without having to leave our seats.  Letty and I later go to get some regular food and beer. 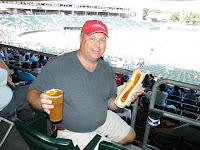 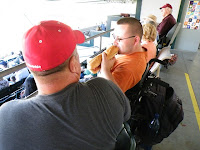 The food here is among the best we’ve had at a baseball game and the beer selection is incredible but the prices are pretty high for a minor league game.  Tim and I split the ½ pound Dinger Dog you see above.  It was very good.  Letty had a chef’s salad that was also delicious.  That Blue Moon I’m holding costs $11 though.   That’s more expensive than the same beer I bought at Angel Stadium earlier this month. 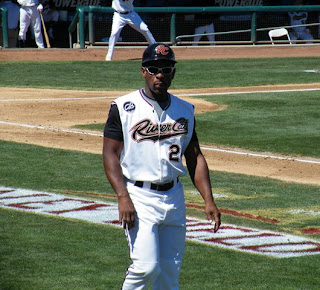 Prices aside, it’s a great game in a great park.  We even got to see a true baseball legend, Hall of Famer Rickey Henderson, coaching first base.  He was also very nice…especially to the ladies who wanted to take pictures with him between innings.

After the game, we were done with this very quick trip to our state’s capitol.  Now, we’re heading up to the Motherlode.

It’s not a long drive up highway 50 where we turn off on highway 49 in Placerville and head south.  Highway 49 is the ribbon of road that connects all of the Gold Rush towns of the Motherlode.  Highway 49…forty-niner…get it? 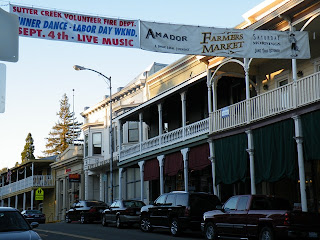 About 40 miles south of Placerville, we pull past Amador City and then into the small town of Sutter Creek, which will be our base of operations for the next few days.  Our hotel will be the Days Inn at the north end of town.  We get a suite, which was probably a waste of extra money, because the layout has the living room way off to the side, with no TV, and is not really conducive to using for anything other than an extra sleeping area for Tim.

The sofabed is lumpy…Tim says it’s comfortable, which is fortunate because it sure didn’t look or feel that way when I sat on the edge.  No sheets were provided for it and when I asked the front desk for a set, they brought it but didn’t want to provide a pillow for it.   When I insisted, the manager borrowed a couple of pillows from a vacant room.  We only needed one, they didn’t want to provide it, and when I complained, they brought two?

There’s a slight mildew smell to the room but other than that, the room is adequate and will give us a reason to not be there more than we have to.

After settling in, we head to downtown for dinner.  It’s about a 4 block walk from the hotel, but the sidewalks look iffy for wheelchair access, so we drive.  Upon further inspection, it was accessible for a wheelchair, if a bit bumpy, but there are many sections in the Gold Rush era downtown that are not and would require wheelers to detour into the street.  A good place to start would be to park by City Hall at the north end and walk from there…it’s the most accessible of the routes. 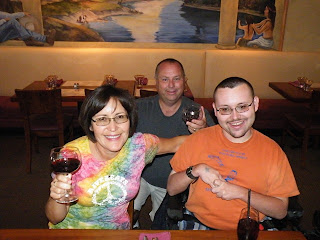 Looking on Yelp.com before the trip, I made up a list of restaurants that looked interesting to try.  Tonight, we’re going to J&D’s Steakhouse, right in the middle of downtown Sutter Creek.  It’s happy hour when we arrive so we order some of the delicious red wine they’re pouring tonight for just $3.  Next, it’s on to an appetizer of jalapeno chips that remind us a bit of fried pickles.  The peppers are sliced up, battered, and deep fried.  They’re served on a heaping plate with ranch dressing and are very good.    Tim has a burger and Letty has the pasta primavera.  I’m not really hungry, so I just subsist on the jalapenos, wine, bread, and Tim’s leftovers.  It’s all very good and we want to come back here again if we have time.
NOTE: J and D's has closed since this 2010 visit 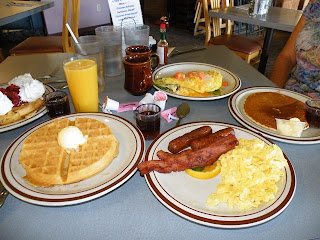 The next morning, we head over to nearby Jackson, the county seat.  Breakfast is a delicious spread of waffles, pancakes, eggs, bacon, and sausage at the Waffle Shop on the south end of town on highway 49. 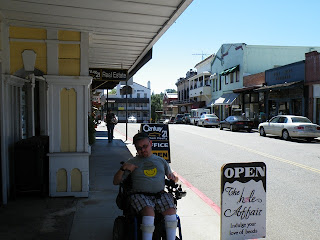 After breakfast, we take a stroll around downtown.  One of Letty’s favorite kitchen shops is located here, the Home and Farm Supply store.  Don’t let the name fool you, it’s just a really nice kitchen shop, no farm implements are to be seen. 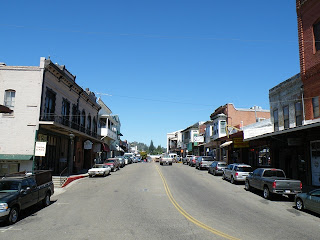 After years in a tiny building with almost no parking by the fire station, the owners bought this vintage building up the block and have turned it into something worthy of Williams Sonoma.  Well worth a stop if you’re into cooking and the gadgets that go with it. 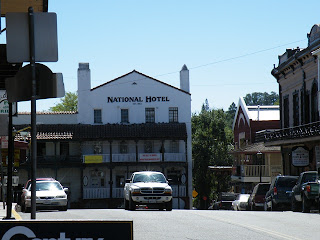 Walking around town afterward though reveals an old town getting ravaged by the recession.  Many storefronts are empty with “For Lease” signs on them.  Even the old Jackson Hotel, built in 1862, has a for sale sign on it.  Closer inspection reveals that the ABC has revoked their liquor license for an infraction, so that could have something to do with it as well. 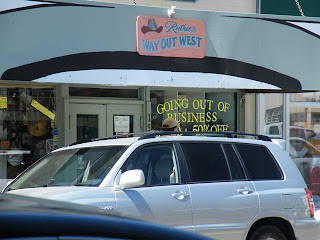 The two busy businesses here today are the pawn shop and the liquor store.  Hardly a great scene.  It’s a bit depressing but luckily things will pick up once we leave Jackson behind. 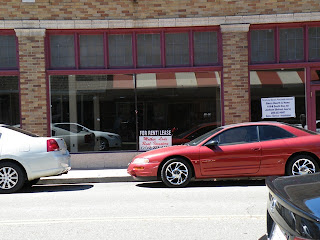 Stay tuned for that part of the trip.