Ending Up Our Nova Scotian Adventure 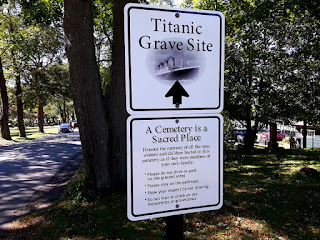 We've got one more full day in Halifax before it's time to head home. Let's head out into the city and pick up a few last sights before we leave...

Fairview Lawn Cemetery is a bit out of our comfortable walking distance so we take the number 21 bus from the waterfront. It's about a 20 minute ride on the fully accessible bus and we're let off about a block from the front gate.

In April of 1912, the Titanic went down about 700 miles out to sea from Halifax. The city was the closest to the accident site with the means necessary to mount a rescue and recovery effort. Much of what had to be done was to recover bodies from the icy seas. 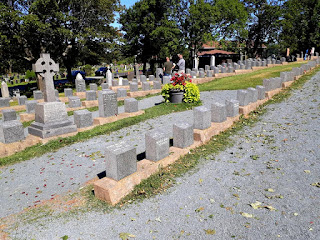 The White Star company offered to pay burial expenses for the victims on the condition that they be buried in Halifax and with a modest headstone. Anything beyond that would be at the expense of the survivors. 121 are buried here at Fairview Lawn, 10 are buried next door at the Baron de Hirsch Jewish Cemetery, and 19 are interred at Mt. Olivet Catholic Cemetery.

Signs at the gate point the way to the plot in the back of the grounds where the Titanic victims are buried. It's about a quarter mile walk from the front gate. 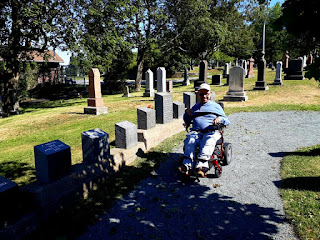 We browse the head stones, most are the company-provided basic version while a few are a bit more elaborate, and try to imagine the stories behind each one. Some are still unidentified. 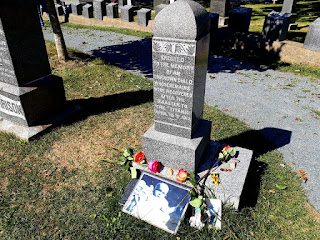 The one that is most poignant is a baby who could not be identified. At least at first...more recent DNA testing has revealed the baby to be Sidney Goodwin. An updated tombstone sits at the base of the 'unknown' one while someone has provided a photo of baby Sidney. Many people leave toys and coins for Sidney on his monument. 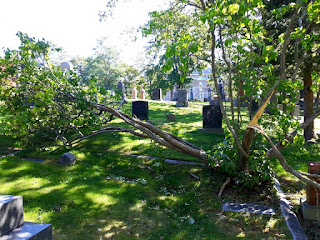 Many trees in the park are toppled from Hurricane Dorian's visit a couple of days ago. That day, we hunkered in our hotel room to wait it out. The power in and around the cemetery is still out days later. 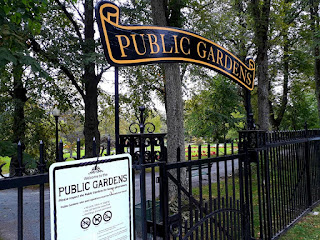 Moving on from the cemetery, we walk past the Public Gardens. It has been closed since the storm and would remain that way for the duration of our trip. We never got to go inside. 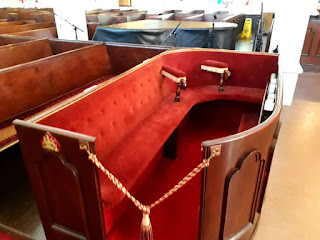 A few blocks away, we visit one of the city's oldest buildings, St. Paul's Church which dates to the city's founding in 1749. Inside are plenty of artifacts covering the almost three centuries since such as the Royal Pew for the Queen or King, the old pipe organ, and even a few Titanic artifacts.

A couple of different things, though, date back to the Halifax Explosion of 1917. When a French explosives ship collided with a Norwegian ship on December 6th, the resulting cataclysm was the largest man-made explosion the world has ever seen until nuclear weapons came along. 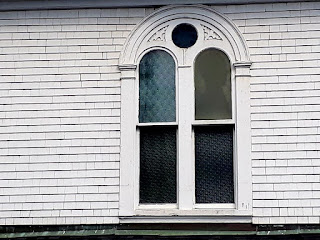 Outside, you can see what looks like a silhouette in one of the windows. There are a few stories about what happened, the most morbid is that a head flew through the window from the explosion and all attempts to remove the shadow that remained have failed and a ghostly apparition remains.

The docent, however, sets us strait. The window broke in the explosion, the resulting damage looked like a silhouette, and that had a resemblance to the pastor of the church so they put two panes of glass on either side to preserve it. 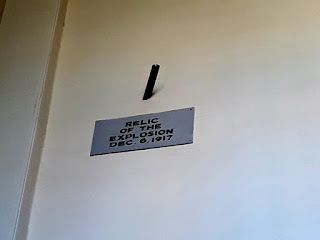 Another is in the entrance. When you look up, you'll see a metal bar embedded in the wall. This was blown from the explosion over a mile and a half away and has been sticking out of the plaster ever since.

Just up the street is St. Mary's Cathedral. This Catholic church is about two centuries old, has plenty of beautiful artwork inside, and makes for a very handy, accessible bathroom stop.

Back down by St. Paul's Church is the Old Burying Ground. This cemetery is so old that it filled to capacity in 1844 so it closed before most of Canada's major cities were even founded. 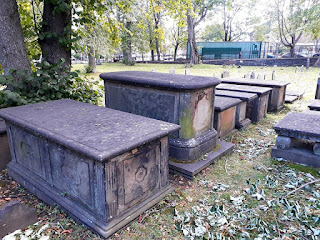 About 1,200 headstones are hear although there's more than ten times that number of bodies rotting in the ground. The grave of Robert Ross is here, who burned Washington D.C. and the White House during the War of 1812. 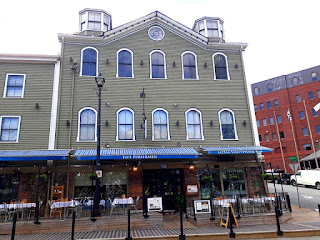 On the other side of St. Paul's is the Five Fishermen restaurant. This is curious because in 1912 it was a mortuary. The dining room upstairs was used to embalm bodies from the Titanic. 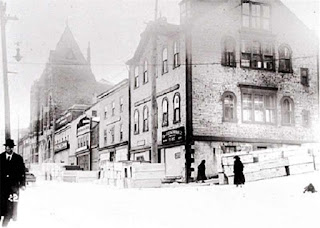 It's supposed to be a good restaurant and we wanted to eat there but, alas, it's not wheelchair friendly.

Now, it's back to the waterfront.

Back at the Maritime Museum, we see the HMCS Sackville docked outside. This historic ship, a submarine hunting Corvette, had a legendary career attacking U-Boats in World War I. 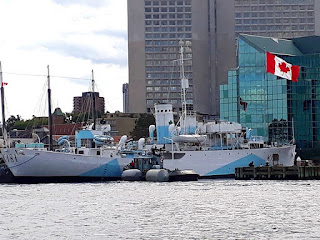 It also served in World War II and the Korean conflict.

Today, self guided tours are available for free. I go onboard and shoot the video you can watch below.

Unfortunately, the Sackville is tight, full of steps, stairs, ladders and other obstacles so wheelchairs would not be able to go onboard.

We've got one more stop on our sightseeing tour. Maud Lewis is a famous Canadian artist (you can pose inside a frame of her recreated artwork on the waterfront, above). She was disabled and lived with her husband in poverty in a shack in Marshalltown on the bay side of Nova Scotia.

She sold her works to travellers out of her home and became a renowned artist. 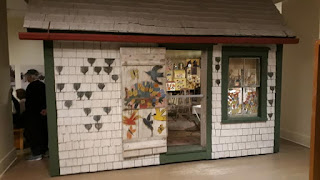 Her shack, which she painted from top to bottom, inside and out, has been relocated to a gallery specifically built for it at the Art Gallery of Nova Scotia.

We go to take a look, admiring her artwork hanging on the walls. 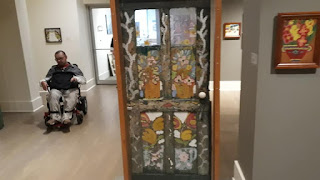 Here's Tim next to the door of her house, on display in the gallery.

With that, we've seen everything we want to see and will head back to the hotel to rest up for the trip home.