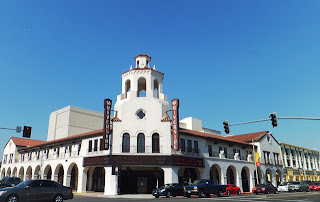 Farmer Boys is a fast food chain in California and Nevada. Just around the corner from our hotel, the Mission Inn, is their corporate headquarters. Next door to that is their flagship store.

Seems like a fitting place to have a quick breakfast so, armed with coupons we received before leaving home, we have a nice plate of French toast and eggs before heading out for the day.

We’ll need the energy because we’re climbing a mountain.  Well, mountain might be ambitious…more like a hill…but it’s called a mountain here…Mount Rubidoux.

About ½ a mile due west of the hotel, Mt. Rubidoux has long been a landmark here. Bought by Frank Miller, owner of the Mission Inn at the time, it was used for Easter sunrise services and eventually donated to the city. 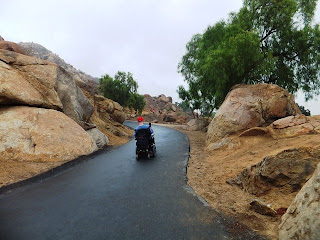 Cars used to be able to drive to the summit on a one-way, narrow road.  They’d go up on the north side and descend on the south side. Autos were banned in 1992 but those beautifully paved roads means this is a wheelchair-ready climb.

There are two entrances to the park. The north entrance has no parking so we enter via the south gate which has limited parking and a wheelchair ramp around the gate.

Fellow hikers tell us that the north road is not as steep as the south road so where the two roads meet just a little way up the trail, we switch over to the north road.  Tim tells me that the power meter on his chair has gone down by one bar. No problem, he still has eight left.

The trail winds up through a desert landscape of scrub, cacti, and succulents. Many large rocks also jut out of the ground. At a mile Tim tells me he’s lost another bar.

At a mile and a quarter, Tim…who keeps stopping to check the power meter and starting back up…says he’s lost another one.  I explain to him that all that starting and stopping uses a lot more power than if he were to keep going and not to worry about it unless the power meter turns yellow instead of green. 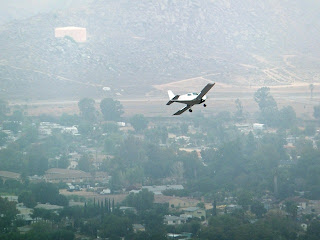 He keeps going without the constant stop and go. About 2/3 of the way up, we cross over from the east side of the mountain to the west side. We’re treated to views of the Santa Ana River (the river that Riverside is on the side of) and a small airport in the distance. It’s kind of neat to see airplanes flying below you as they enter the pattern for the landing strip. 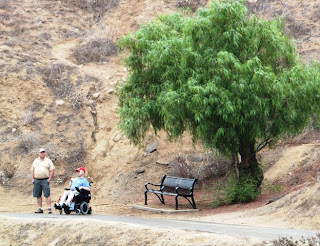 Near the summit, Tim tells me his power meter has gone yellow. Not wanting to take chances, we stop here. I’ll stay and keep Tim company while Letty will continue to the top and take pictures. 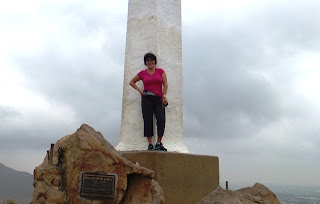 While Tim and I watch planes land below, Letty gets some great pictures at the top. 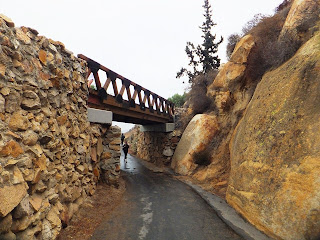 Here is a bridge where the road winds over itself. 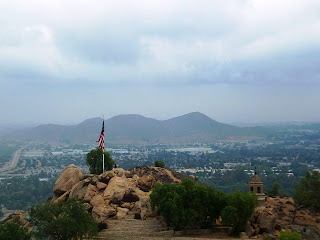 A flag has been planted at the top, with downtown Riverside providing a backdrop. 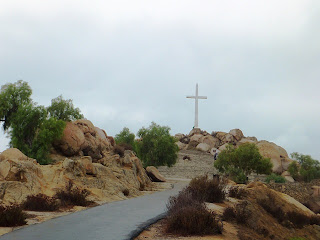 At the peak, a large cross has been erected.

After Letty gets to the top and back to Tim and I, we head back down.  There’s a saddle not too far from where we waited where Tim and I can get similar views to the top. 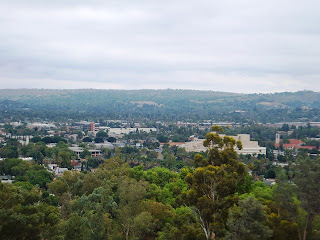 We take a few minutes to see the sight and then head back down to the car where it’s back to the hotel. 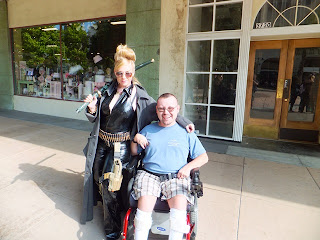 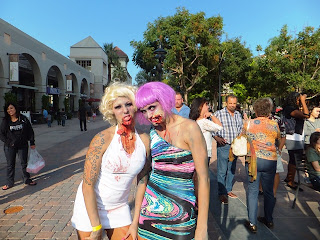 Next to the hotel is the Main Street pedestrian mall. Usually, a quiet place to get a bite to eat or browse for antiques, today it is taken over by hordes of the undead. 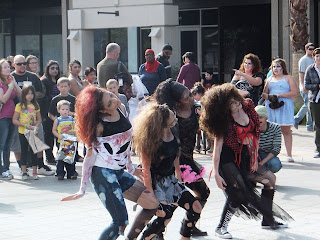 It’s the 2nd Annual Zombie Crawl where Riversides most unlively citizens come out to show their moves and try to gross out the living.

Groups have dance offs in the middle of the plaza…mostly to the tune of Michael Jackson’s “Thriller”…and compete for the best zombie makeup effects.  There’s even a little workshop on how to do different zombie walks, from the fresh out of the grave shuffle to the running zombie. 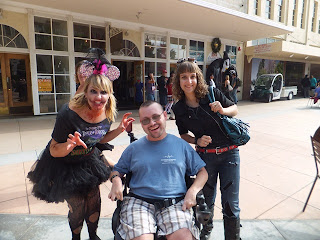 It’s all good fun though Tim had to fend off a few zombies trying to eat his brain. We’ll take refuge in the hotel for now.

We’ve got a show to go to but first it’s dinner. Our hotel package came with valet parking and a $50 credit.  The parking has been used over and over. Now, to use that credit. 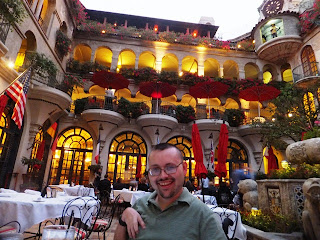 There are four restaurants at the hotel…Duane’s for steaks, Las Campanas for Mexican (great margaritas, too), Bella Trattoria for Italian…and, our choice, the Mission Inn Restaurant for a little of them all dining under the stars in the beautiful main courtyard. 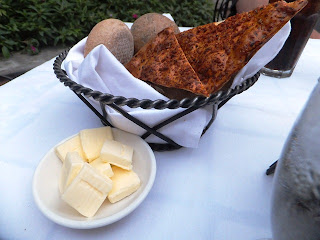 We start off this this great and different bread basket. 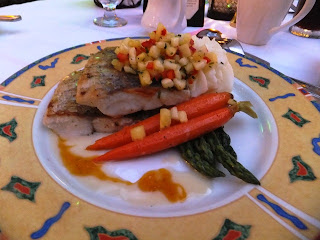 The food is pretty special. While Tim had a basic penne dish, Letty had this fresh fish dish. 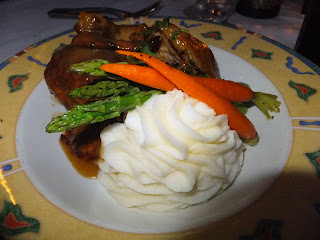 I had this savory and juicy roast chicken with some very creamy mashed potatoes. 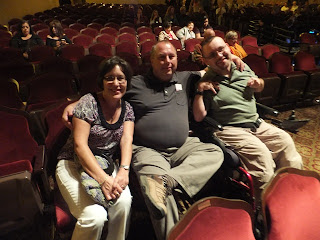 Well fed, we make our way across the street to the recently restored Fox Theater. Tonight, we’re going to see The Mavericks in concert, who have recently reunited with their singer, Raul Malo. 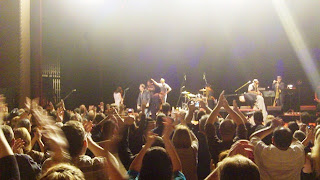 It’s a great, rocking show but the wheelchair seats are not raised very high so whenever the people in front of us feel like standing up and dancing, which is fairly often, it blocks Tim’s view. He’s not very bothered by it but Letty sure is. 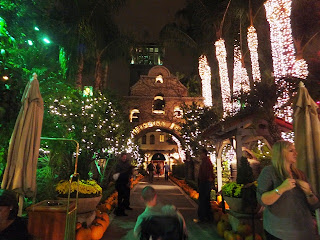 Still, it’s a good show and we have a good time.  We end the night with a bottle of wine back in our roomy, Mission Inn Suite and savor the end of another trip.

Darryl
Copyright 2012 – Darryl Musick
All Rights Reserved
Posted by D. Musick at 4:30 AM