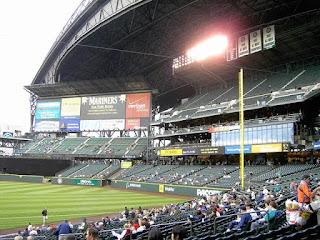 Currently residing at #14 on our list of Major League Baseball stadiums is this park with a giant umbrella in rainy Seattle.

Safeco Field is home to the Seattle Mariners of the American League. Yet to play in the World Series, the team has won the American League West Division Championship in 1995, 1997, and 2001. They were the wild card selection in 2000. The Mariners also share the single season record for wins with 116 wins in 2001 (also Chicago Cubs, 1906). Many All Star and Hall of Fame caliber players have called this team home over the years; Randy Johnson, Ken Griffey, Jr., Rickey Henderson, Edgar Martinez, and Ichiro Suzuki who was recently lost to the Yankees. Each year it seems, baseball analysts pick this team to win their division but lately have been falling short.

In 2010, a management bloodbath led to the coaching staff being fired. This season, they're saved from the cellar by the new American League West member, the struggling Astros. 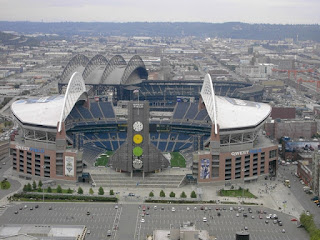 Safeco Field sits south of downtown Seattle proper, just outside of the free bus zone. It is an outdoor stadium that also has a retractable roof to protect it and the fans from the city’s frequent precipitation. The naming rights were bought by an insurance company. 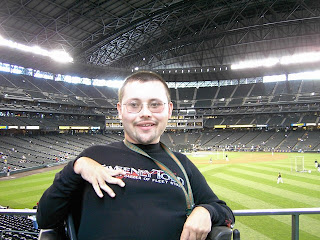 The park feature four levels of seats, the field level, a terrace level, a small club and suite level, and the upper deck. There are also seats in the outfield. The concourse is open, so you can still see the game when you go to get your snacks. 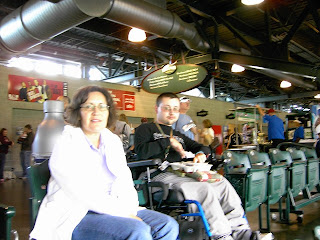 There is wheelchair accessible seating throughout the park at all levels. We did not have any problems buying more than one companion seat. Tickets are now under dynamic pricing where demand sets the price...seems kinda unnecessary for such a lackluster team. We bought our tickets one day in advance at the Mariner’s Team Store in downtown Seattle. Ticket prices range from $7 bleachers to over $400 in the Diamond Club. 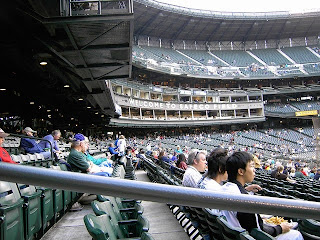 Yes, this is the mid-game crowd.  Why couldn't we buy better seats?

Another problem I had was that these tickets placed us right behind a camera well, severely obstructing our view. This was a game with maybe 3-5,000 fans in attendance. Luckily, the ushers let us move to better seats but why sell us such bad seats, at the high end of their ticket range, when we asked for the best seats, and many more better seats were available? And why such high prices for these seats, especially with a bad team and very low attendance? Lower the prices and get more fans to show up for the games.

The team was terrible the year we were there and their play showed it on the field. Hopefully, the team will someday resolve its issues and give the people of Seattle a better team but as of 2013, that day is still on the horizon.

Food here is good but expensive, just like the tickets. The signature item here is the sushi. A lot of stadiums now serve sushi but it’s usually premade like you’d find in a supermarket. I have to give a lot of credit to this stadium due to the fact that they have sushi chefs on site that make your order as you watch…a true sushi bar.

Besides the usual hot dogs and such…which are good…there is also Ivar’s, a local fried seafood landmark, barbecue, Mexican food, and a rotisserie stand. Across the street is the Pyramid Brewery which has a large beer garden and hall with a happy hour before the game. I highly recommend going there and having some of their great hefeweizen with great prices to match before entering the park.

Public transit got a huge boost when the Link Light Rail opened up. Frequent service to the stadium from downtown and points south is now available. When we visited, there was some commuter rail service to selected games (not ours) and inadequate capacity bus service from King Metro. There is also loads of parking nearby.

For a newer stadium, I have to say that Safeco missed many marks. The food is excellent as is (now) the public transit. Other than that, you’ll be paying a lot for a mediocre to average baseball experience. That’s why it only rates only a dismal 14 out of 18 on our stadium list. Still, it’s better than three other west coast parks…Dodger Stadium, Angel Stadium, and Oakland…but that’s not saying much.