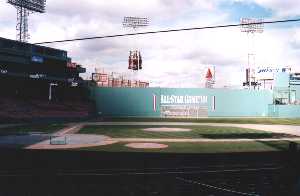 Five days after the Titanic struck an iceberg in the North Atlantic, Fenway Park opened up just south of downtown Boston.  100 years later (as of this week), with a few modifications, the park is still going strong.  It’s the oldest stadium in Major League baseball.

Think of all the history this place has seen.  Babe Ruth, Ted Williams, Carlton Fisk willing his shot to stay fair, the ball rolling through Bill Buckner’s legs, the curse of the Bambino and the 86 year World Series drought, Carl Yastrzemski, Pedro Martinez, Curt Schilling’s bloody sock, and finally…two world championships in the 2000’s.

The current lineup includes such names as David Ortiz, Dustin Pedroia, Jacob Ellsbury, and Mike Napoli. The team just couldn't function under manager Bobby Valentine last year so new skipper, John Farrell is guiding the team in 2013.   Maybe there's something there because, as of this writing, they're tied for first place with their biggest rival, the Yankees.  The team also has the record for the most consecutive sell outs, not a hard feat with such a small stadium and a powerhouse team.

Fenway is quirky.  It’s old.  It looks and feels old.  The first time I stepped foot into the park, I saw the rust, the grime, the pallets of beer kegs, the trucks…and I thought I was in the loading dock.  Nope, this is the concourse where you’d go to get food and beer during the game. 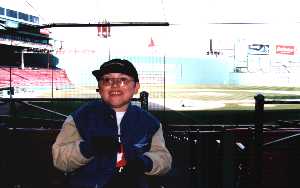 It’s most famous feature is the giant wall in left field that is 37 feet tall called the Green Monster.  There’s a street on the other side and the wall keeps the stadium into its lot.  A ladder and a garage door are on the outfield wall.  Both are in play and can make the ball bounce in crazy directions.  The right field foul pole is only 302 feet out.  Weak hitting second baseman Johnny Pesky figured out how to hook a ball just right to get around this pole earning it the name of Pesky’s Pole.


The scoreboard in left field is manually operated.  Not from nostalgia but because it’s just that old. 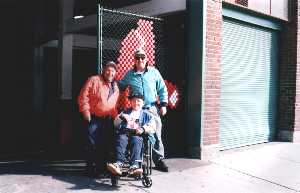 We have been to the park two times.  The first was on the day that the hated New York Yankees eliminated the Sox from the playoffs in 1999.  We struck up a conversation with groundskeeper Al Forrester, who was sitting in a chair outside.   When he learned we were from Los Angeles, he asked “do you have a camera?”  Yes we did.  “Go on in,” he said.  We did and wandered around the empty stadium to our heart’s content.


Several years later, we came back and took a formal tour because the games that week were sold out.  This time, we got to walk along the warning track, see inside the dugouts and scoreboard, and see the private club behind home plate.


It’s the most time we’ve spent inside a stadium without seeing a game.  With that in mind, here are our impressions of the park. 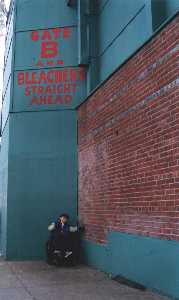 The Other Side of the Green Monster


On game day, it’s festive outside the park with food booths, souvenir shops, restaurants, and bars.  If you can’t get into the game, watch it at one of the local watering holes across the street.    Even on non-game days, there is still quite a bit of activity in the area around the stadium.  It’s a fun place anytime.
The seats are a bit small.  There are newer seats located on top of the Green Monster and on top of the right field roof.  Wheelchair accessible locations are available throughout the park, although the accessible seats at the top of the Green Monster were built with huge obstructions.  Their website says they’ve been re-designed, I have not seen them since they were.
Tickets a pretty darn expensive and hard to come by at the perennially sold out park.  Disabled fans can call (877) RED-SOX9.  Prices run from $22 to well over $300.
I have no idea how the food here is but in addition to the usual fare lobster rolls, Italian sandwiches, pulled pork, and our favorite East Coast treat…fried dough…is available here.
Transit for able-bodied fans is great.  The Kenmore Station…the closest one to the stadium…is marked as accessible on the MBTA’s map but on the station list says “no accessible features.”  We had to disembark at another station a mile away and walk the remaining distance.  Also note that this area is served by the Green Line, Boston’s oldest transit line and the most accessibility challenged one.  Maybe they’ve added accessibility to the Kenmore station since we were there, but their website is contradictory on it.
Very limited parking is available near the stadium.
I’d love to see a game here someday, just to see one in the oldest stadium.  Be aware that there may be accessibility issues when you go here and prepare for them.