Beating the Heat in Half Moon Bay, California

Memorial Day has just passed, the tourists are gone, our town has gone back to it's normal mode except that it's bloody hot. 105 degrees is the predicted high for a couple of days and I just don't want to deal with the heat right now.

Since the holiday weekend, and its high hotel rates have passed, I’m wondering if we can take a quick getaway to the 70 degree confines of the Northern California coast. A quick search finds a $144 room at the Half Moon Bay Lodge, a relatively short 2 hour drive from home.

I make the reservation and off we go. 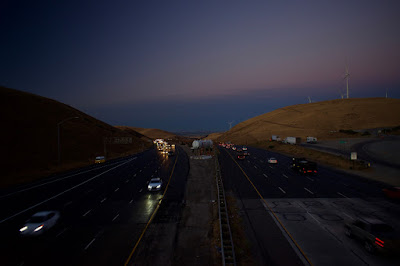 While it was a scary place half a century ago when the Rolling Stones played an ill-fated free concert there, today the Altamont Pass concerns me more with the traffic and unecessarily brave drivers on the freeway that crosses it.

I see the old speedway that hosted the concert to the left while before me the 580 merges into Interstate 235, which I'm driving on. This is the only crossing to the Bay Area for many miles and it makes for a harrowing bottleneck with tens of thousands of commuters doing their best to hurry to their jobs on the other side.

It's stressful driving anytime and worse when the traffic is heavy. Once past the interchange, it lightens up a bit with some occasional slowdowns until we get to highway 92 in Hayward, where we turn west to cross the San Mateo Bridge. At seven miles, it's the longest bridge in California.

Staying in highway 92, it's only another 20 minutes over the hills to the rural beachfront community of Half Moon Bay. 20 minutes but a million metaphoric miles from the urban sprawl that we just left. 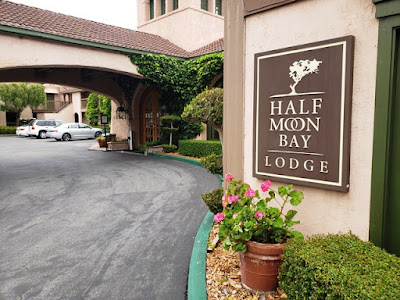 It's just before noon when we arrive. My plan is to park at the hotel...the Half Moon Bay Lodge...have lunch at the restaurant next door, then check in. I go to the lobby to let them know I have a reservation and to get their OK to leave my car there while we eat. They say the room is ready, so it I want I could just check in now. 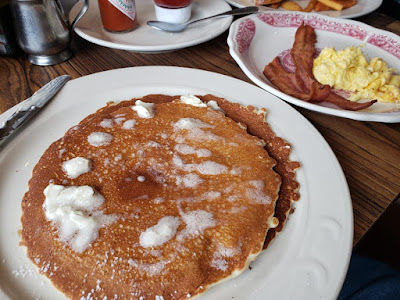 Works for me. We get our keycards and head over to Joe's, an Italian restaurant, where we eat a late breakfast of omelets, pancakes, bacon, and eggs. 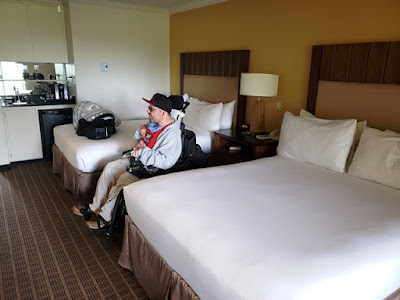 The room at the hotel is a standard double-queen room but with wider doors that work for the wheelchair. The inn does have a double-queen room with a roll-in shower but it was unavailable. I gave Tim a shower before we left and that should hold us over until we get back home tomorrow. 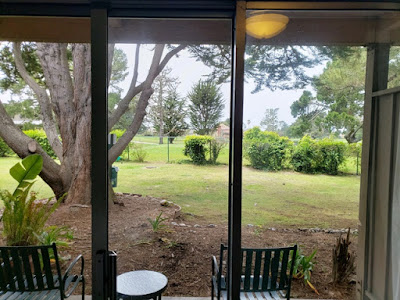 The room faces a golf course and a patio with nice views awaits us for later.

After dropping off our bags in the room, we head north a couple of miles to Poplar Beach. Parking at the small lot here is $10, or free if you have a handcapped plate or placard. We're here to hike the Coastal Trail, an accessible path that winds for miles along the cliffs and beaches of this bay, from the golf course on the south end to Maverick's beach on the north.

Our new thing to do on trips is to take a long walk or hike to explore our destination. Today, we'll start at Poplar Beach...actually, bluff, as we're on top of the cliffs...hike south to the Wavecrest nature preserve, then double back and go north to Francis Beach. 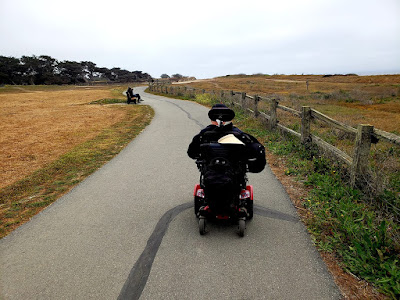 While, back in Amador County, the temperature is supposed to hit triple digits, today the predicted high here is 57 degrees. It's pants and sweater weather for us as we start our walk. 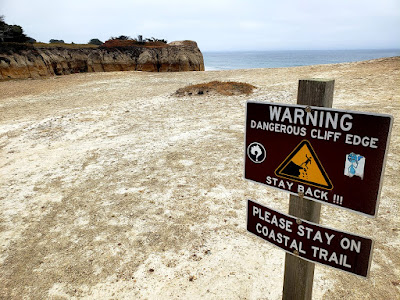 The path is smooth, paved, and set back from the top of the cliff by several feet so it's safe. 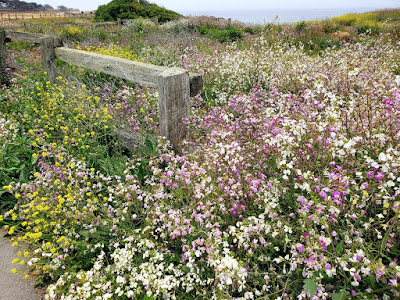 A lot of wildflowers are in bloom today, with a nice colorful contrast to the brown dirt and the crashing waves beyond. 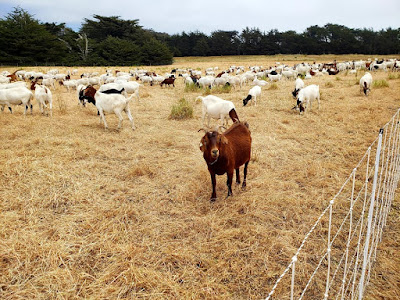 A fenced-off field of goats are to our left, keeping the grass mowed. 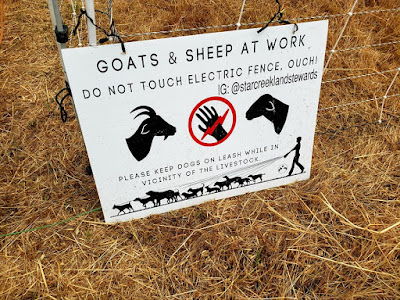 Signs tell us not to touch the electrified fence.

Soon, we approach a gulch where we have to detour a couple of hundred yards inland to cross a bridge. Remains of an older bridge closer to the ocean tells us that this is a relatively new route. 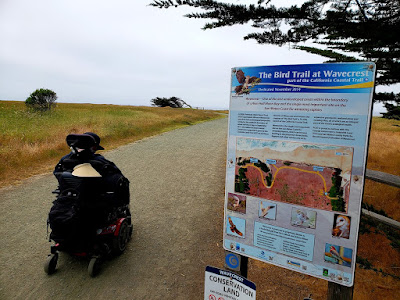 We've crossed into the Wavecrest preserve and a sign tells us that the next third of a mile is a birdwatcher's paradise. We don't see too many birds, however, but the winding path across this meadow is very pretty.

At the other side, we turn around and head back. At the parking lot, we're getting a bit warm so we ditch the sweaters in our car before we continue.

The next section is full of wildflowers along the fairly featureless bluff top.

We make it to Francis Beach where we rest on a picnic table watching a gull trying to fend off ravens and other gulls to keep possession of a broken open watermelon he found. He won and was able to gorge on the melon all by himself.

Four and a half miles later, we're back at the car and head to nearby downtown to check out the shops and do a little more strolling.

Tim and I don't find too much to our fancy but Letty spends some time in a yarn shop and a kitchen shop we found. 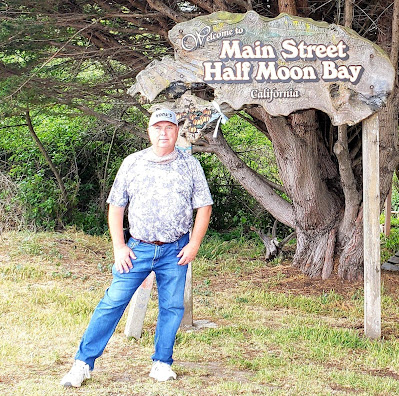 At the end of downtown is a century-plus old bridge that crosses a very lush creek. We cross over then, again, to the other side of the street to walk back. We'll call it a day, still full from our brunch, where we'll get some wine and snacks to tide us over in our hotel room until tomorrow.