This report that I did a decade ago generated some critical e-mail.  What can I do?  I just tell it like I see it...at least you know I'm not just a cheerleader for the destinations we visit.  When I have been able to get updated information, that has been noted in the text...

Buckingham Fountain
What can I say about the Second City? There were a few things I liked, some things I didn’t, and a lot of things that didn’t sway me one way or another.

In general, wheelchair access is fairly good on the El’s (the subway/elevated trains) and not nearly so good on the buses (the CTA's web site says that the bus situation has since been improved - Ed). The food here can be excellent at times. So come on along and see how the trip went.

Our flight out from LAX was on time and non-stop. We arrived at Midway airport around 6pm local time. Midway is under major construction and as a consequence, the walk out to the baggage claim was very long. Construction should be finished later this year with close-in gates.

ATA airlines did a good job with our electric wheelchair and with assistance in getting on and off the plane. We were worried because this is our first major trip by air with the power chair (we did one weekend in San Francisco a few years ago). (UPDATE: ATA went bankrupt and is now owned by Southwest.)

After claiming our luggage, we head out to the Midway El station. The Orange Line comes right into the airport here. The Blue Line connects the city with O’Hare airport. Both airport El stations have elevators and are accessible..

The lady at the station couldn’t be more helpful. She assisted us with purchasing our 5 day CTA passes and asked if we needed a gap filler (a ramp) for the train. I asked her if the elevator at our destination station was working and she assured me it was.

We loaded onto the train with our luggage and headed into town. We exited the train at the Library station on the south side of the Loop. After the train pulls out, we notice the elevator is out of order.  To be sure, this is partly my fault because I should have looked at the board for stations with broken elevators before we boarded the train.

To get around this we must wait for another train and take it three stops up the line where we can cross over and catch another train back to the Library station and use the working elevator on the opposite platform. 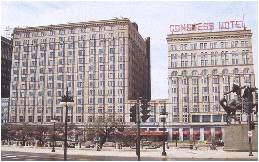 The Congress Hotel on Grant Park

After we finally get on the ground, it’s a short 3-block walk to our hotel, the Congress on Grant Park. We had booked a package with the AAA that included breakfast. The hotel didn’t want to feed us. Even after showing them a printout with the rate package that included breakfast, they wouldn’t budge. AAA was closed on Saturday, so I would have to call on Monday.

So far, I wasn’t feeling very good on this trip.

Sunday was a bright sunny day, if a bit on the cool side at 45 degrees. Since the hotel won’t feed us, we head out around the corner to Ronny’s Steak House. There is a very generous breakfast for $3.99 that included 2 pork chops, eggs, toast, hash browns, and coffee.

The Green Line El takes us out to Oak Park where we visit the Frank Lloyd Wright house and studio. Oak Park is a tidy and pretty suburb where Wright lived at the turn of the 20th century for a decade at the beginning of his storied career. It’s a pleasant 4 or 5 block walk from the Harlem/Lake El station to the Wright house. 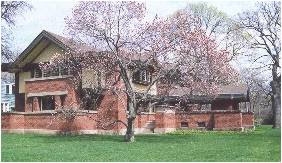 One of the Wright designed homes in Oak Park

The studio is accessible but the house isn’t. Wheelchair users are shown a video of the rest of the house while the tour leaves them behind in the studio. There is also a walking tour showcasing about a dozen Wright designed or rehabbed houses in the neighborhood that is completely accessible. We opt for the walking tour.

The houses are amazing starting with the first house he designed, “under the table”, while working with the firm of Adler and Sullivan who didn’t allow their staff architects to take on outside projects. The tour also includes some magnificent examples of Wright’s prairie style architecture that would more define his style later.

Back in the Loop, we have dinner at Ada’s deli on Wabash that consisted of some delicious sandwiches and bagels delivered by great servers. We grab some desert on the way out, but sadly the sweets didn’t live up to the tasty food.

Monday is another sunny day but storm clouds are on the horizon. It’s a ten block walk from our hotel to the Sear’s Willis Tower. (The name was changed but it will always be the Sear's Tower to me - Ed)  Along the way, we have a completely forgettable breakfast complements of the surly staff at Wall Street Deli. Funny, here in LA, Wall Street Deli is one of my favorite lunch stops at work. 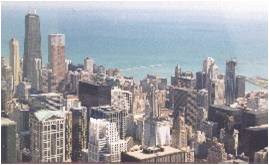 The view from the Sear's Willis Tower
The view from America’s tallest office building is suitably spectacular. We enjoy the open air deck of the Empire State Building more, but this trip to the top is also quite nice. Except you’re not at the top. The observation deck takes up the 103rd floor while there are seven more floors of offices above you.

Today’s lunch is at Fast Track Hot Dogs, a block away from the accessible Clinton stop on the Green Line El. It’s delicious with everybody going back to the counter for another dog.

We continue on the Green Line to Kedzie to see the Garfield Park Conservatory. This is supposed to be one of the largest gardens under glass in the world. It is indeed spectacular but we had to walk about a half-mile from the station through a very rough and dangerous looking neighborhood to get there (an accessible station is now open right next to the conservatory). About 3:00pm, it starts snowing...heavily...and doesn’t let up until sometime between bedtime and waking up. (This is April 16th, folks)

After lunch and back at the hotel, I call my travel agent to complain about the breakfast situation. After being on hold for 45 minutes and being told that, essentially, it’s not their problem, someone finally looks up the record and says, yeah, you are supposed to get breakfast. The travel agent calls the hotel manager who sheepishly forks over food coupons for the rest of the week and promises a “consideration” on our final bill for the two breakfasts we’ve missed.

Will we get that consideration on our bill?  Will it warm up?  What else will happen to us will we see in Chicago?  Stay tuned for the conclusion in Part 2 of this report.