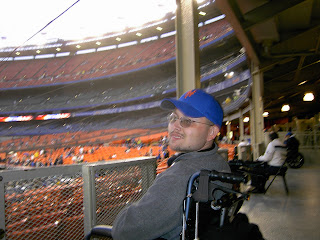 NOTE: Tim is in charge of planning our next big trip.  It's a baseball stadium tour working towards his goal of visiting every major league park.  This trip will add three to his already big list.

Today I bought the plane tickets for our trip. My dad has confirmed that his vacation time was approved so now we start to nail everything down. I went online and did a search at Expedia, Southwest, and Frontier. The closest Southwest came to Cincinnati was Columbus. Frontier went to Dayton. But I found a flight right to Cincinnati for less on Expedia, on Continental connecting through Houston.
(Note: Continental Airlines has since been merged with United Airlines since the report was originally written-Ed)

The flight home was just a little bit cheaper on Southwest from Kansas City, but since Southwest doesn’t charge baggage fees, we’ll save around $100 for the entire flight cost plus, since we board first, we should be able to get bulkhead seats coming home. We will be leaving from Ontario, California…which is a much easier airport than LAX.

Entire flight cost is $861, including taxes, for three people. We already booked seats together for the Continental flights.  Both sites, Southwest and Expedia, let you arrange for your aisle chair and transfer online.

Now it’s time to book the hotels. The best room for the best price I could find in Cincinatti was the Comfort Suites at $131 per night a little less than a mile from the ballpark. It's a wheelchair accessible studio with a king bed and sofabed.  I booked it. It has no cancellation fees if cancelled at least 1 day prior to arrival.

I found a 2-room suite at the Drury Inn in St. Louis next to the arch for $157 per night. Finally, in Kansas City I booked the Residence Inn by Marriott near downtown. Both of these hotels let you cancel with no penalty up until the day of arrival and both are also accessible suites.

Now that we’re guaranteed rooms, I can keep a lookout for lower rates and if I find them, cancel the original reservations to save money.

We’re now good with air tickets and hotel reservations. Next up, need to find a rental car to drive from Cincinnati to St. Louis…and maybe to Kansas City. Also, I need to get tickets to the games.
(Note: We'll be updating these prices for 2022 in the last post of this series, stay tuned - Ed)
-Tim