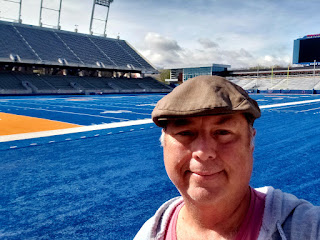 The weather is nice today in downtown Boise, a little breezy but sunny and just on the cool side of warm. We head off south on 9th Street for the mile or so to the Boise River.

We scoot a couple of blocks over to Julia Davis Park and follow the paved path that is perfect for wheelchairs over to the river's edge.

The paved path may be perfect for Tim's wheelchair but the Canada geese hanging out here make it a bit of a minefield to navigate but he does so successfully.

On it's way to the Snake River, west of town, the Boise River cuts a cool, rushing ribbon through the heart of the city. In the summertime, it's common to see hundreds of tubes, rafts, and any other floating device that can be had carrying revelers to the west of town where a bus can carry them back to the starting point six miles back.

It's too early in the year for that, though, so it's just sightseers, ducks, and geese enjoying the river today.

Soon, we reach the Friendship Bridge, an accessible pedestrian bridge, that allows us to cross the river from the park across to the campus of Boise State University on the other side.

As students in backpacks rush to class, groups of prospective freshmen and their parents are in groups taking tours during their spring break trying to decide if this school is for them. We continue on the river path to the eastern end of the campus.

We come across a big stadium. This is Albersons Stadium, the football home of the Boise State Broncos...one of the nation's top NCAA Division 1 teams.

The unique claim to fame for this stadium is its blue turf. No green grass for these football players, they get the blues.

It might be the blues for us too as we see a sign saying it's a $500 fine to enter the stadium. Another sign nearby says we can have access to the field via the Boise State Hall of Fame. I see two men inside the stadium and call out to them.

It turns out that one of them is Daryn Colledge, a former Boise State standout who went on to play guard on the Green Bay Packers. After retiring from the NFL, Colledge joined the National Guard and now works in the Athletic Department at his alma mater.

Mr. Colledge is nice enough to answer my question and point us to the Allen Noble Hall of Fame, which is on the opposite side of this massive stadium from where we are.

We get over there and it's a nice museum of Boise State athletic history. It's free and you even get a few goodies like the poster of Boise's football schedule that Tim takes with him.

A woman at the reception asks us to sign in, then escorts us to the inside of the stadium where we can take our time viewing this end of the famous blue turf.

She explains how the school put in the turf in 1986. In 2002, the school trademarked a field "other than green" and now any other sports facility that wants to use a color other than green has to get the school's permission before doing so.

We get some selfies and a family portrait before going back inside and spending some time exploring the hall.

After our time at the university, we retrace our way back down the river to the Ann Frank Memorial, a small area dedicated to the diarist whose family hid from the Nazis in an Amsterdam attic only to end up perishing in a concentration camp a year before D-Day.

It's also an exhibit dedicated to promoting human rights around the world.

Back in downtown, we decide we're in Idaho...we should try the states most famous food product. At the Boise Fry Company, you can have your fried Idaho spuds in over a half dozen preparations. Regular french fries, battered, curly, russet, red, gold, and so on.

It's good but I have to give the nod to the Belgian waffle place at the other end of the dining room that shares the space. A good Liege waffle is a thing of beauty and, for less than five bucks, you can get one here.

We wind our way up the street to take a quick look at the Capitol. Then it's back to our hotel to rest up. We have a very long and lonely drive back to Winnemucca and then over the mountains to our home in California.