Back in October, I received an email from Hyatt. Luckily, I didn't delete it and read it...it was informing me that I had over 15,000 reward points that would expire by the end of the year if I didn't do anything. I guess we'd signed up with Hyatt on our travels over the years and forgot about it.
Glancing around their website, I found a few hotels that we would be able to book for 5,000 points per night, giving us a three-night getaway. The properties were in Eugene, Oregon, Salt Lake City, and Boise, Idaho.

Tim's a sometimes fan of college football so I put it to him this way...we could visit the home of the Oregon Ducks, BYU, or the blue fields of Boise State. Tim chose Boise so I made the reservation before the end of the year so the points wouldn't expire and we could go in April.

Now, the time is here and...in between a few nights in northern Nevada...we're popping up to Boise. The room at the Hyatt is great with two queen size beds and a conversation pit-style couch that also folds out for a bed.
I'll take that so we can all have our own bed and get a good night's sleep.

The bathroom does not have a roll-in shower but an accessible tub with a shower bench provided on request from the management.
It's on the top floor so it's nice and quiet with no footsteps from the room above.

We will have two full days to explore this city. We've decided it will be on foot or, in Tim's case, on wheel. The weather for the first day calls for spotty showers while the second day will be sunny and mild. This first day, we'll stay within ten minutes of the hotel in case the weather turns too bad. Out we go...

We're on our way to the Basque Block but along the way, we come upon a plaza with a number of antique tractors encased in large glass cubes.

A number of inflatable animals dot the lawn, a large video screen is above it all, showing pictures of pets. Intrigued, we wander in to explore a little deeper.

There's a stage and a small amphitheater next to someting of a scultpure made of cables like a big spider web. Perfect for climbing and I couldn't help myself. Luckily, 911 was not needed to get me out...but it was close!

There's a building with a large lobby filled with colorful artwork adjacent with the same "JUMP" logo on it so I go in to see what's going on.
I find myself standing on a black circle and a lady nearby telling me to "jump!" What? "That's our jump camera...jump!"
Okay, I do a little hop and she says to turn around and there I am...on a large screen everyone in the lobby can see...doing my little jump on a loop.
"Okay, what is this place?" I ask her.
She explains that this is JUMP, short for Jack's Urban Meeting Place, a kind of playground/museum/amusement park for people of all ages. It comes from Jack Simplot, of the Simplot Corporation, who funded it. Jack made a fortune in agriculture selling potatoes to McDonald's for fries.

The Simplot corporate headquarters loom over this plaza that was built with Jack's money. Anyone can come in a play around...for free...on the slides (there's another giant 8-person slide on the roof of the parking structure), climbing aparatus, and see the 52 antique tractors on display. Many of them in the parking lot.

We find a little nest to hide in and take a couple of pictures before heading back on our way after visiting Mr. Simplot's fun contribution to the city. We will also come to find out that the Simplot name is everywhere here as the family's philanthropic efforts are well in evidence here.

A few more blocks takes us to the section of West Grove Street on the other side of the Idaho Central Arena known as the Basque Block. This neighborhood preserves and celebrates the area's Basque population.
The Basque come from the area between Spain and France and are culturally and linguistically seperate from both countries. Many came to America looking for prosperity. A lot of the younger men ending up being shepherds, living lonely lives in the plains of the west...mostly California, Nevada, and Idaho...and would come to neighborhoods like this to congregate with their countrymen and women.

The Basque Cultural Center and Museum gives an overview of the culture and history. Five dollars gets you inside. It's completely wheelchair accessible (even has an accessible family restroom) and is very interesting.

Interactive displays let you see, hear, feel, and smell the life of the shepherd.

A 3D gallery (glasses provided with admission) shows old stereoscopic pictures of the Basque culture in Europe.
A third gallery explores the Basque in America with a listing of all Basque clubs, restaurants, and even handball courts in the new world.
We are fans of the Basque culture and this is a very interesting stop for us.
There is a Basque market that looks interesting but is only open on Mondays (due to Covid) and that is not today. Leku Ona, a large restaurant at the end of the block, allows us to stop and have a picon punch in the bar...wheelchairs go around the corner on 6th Street where you'll find an elevator for access in their patio.
We'll come back here for dinner to have salmon, a Basque steak sandwich, and a burger for Tim.

Back to the beginning of the block is tiny Bar Gernika where we have a hot bowl of soup and croquettes. 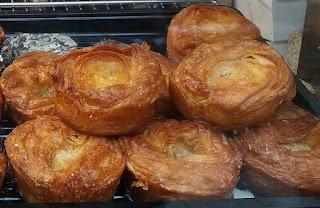 We have to travel a couple of blocks further to visit Ansots to get some Basque chorizo to take home and to eat a Kouign Amann, a flaky, butter, croissant-type puff pastry that is an extremely delicious bargain at five bucks.
The rain comes as we have dinner but eases up just enough for us to get back to the hotel and rest up for our next walk tomorrow.
Darryl Musick
Copyright 2022 - All Rights Reserved
Posted by D. Musick at 4:30 AM