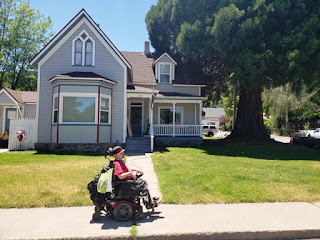 We're still in a walking mood after yesterday's hike but we're going to keep in local. The Plumas County Museum, conveniently located just over a block away from our hotel, has a lot of literature about the surrounding area. We're taking advantage of their Quincy Walking Tour to take a closer look at this pretty town. 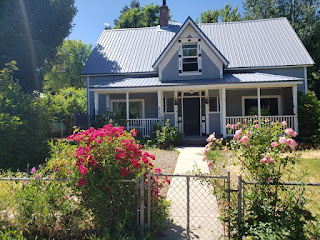 While our hotel isn't particularly historic, next door is a couple of historic properties including the Watson Home and Lee homesite. Corydon and Clark Lee are major names in the area...even the street we're staying on is named after them...and a large Victorian house was built here in 1889 but destroyed in 1969 by fire. Clark Lee moved another house here in 1902 that's still there.

One house removed is the Nannie White house, a sturdy brick house built in 1913 by a local widow.

Down the street, Judge John Goodwin built a large brick house in 1865...the town's first...which became the local hospital. Now, it's the home of Plumas Rural Services.

Skipping ahead, the livery stable was built in 1875. Still standing, its the home of a local brewery and theater. 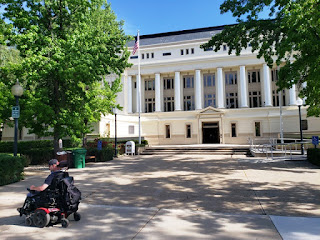 Across the street is the imposing and solid Plumas County Courthouse, built in 1920 with more marble than the original budget called for. 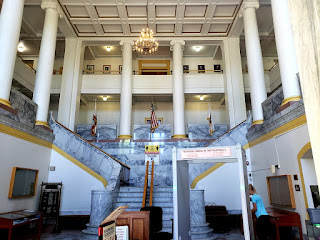 The lobby is quite stunning.

In 1903, the Plumas County Bank was built in what locals called a "pretentious" Spanish mission style. It's now an investment office and the wine bar out back offers live music on the patio.

Under renovation, the 1884 Lowell Home was built with unusual diagonal porch while the in-laws, the Cloughs, lived across the street in their 1879 mansion. Greeley Clough went on to become a judge and state assemblyman.

Opposite, a modern home has replaced the home of A.W. Keddie who brought the all-important railroad to Plumas County. 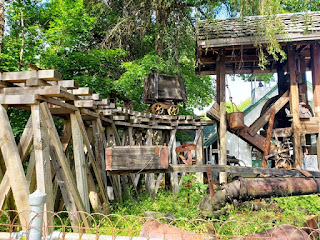 Behind the museum is the Variel House, built in 1878. Tours can be arranged with the museum but it is not accessible. There is also a garden with old mining equipment in it.

On the other side of the museum is the 1863 law office of John D. Goodwin. 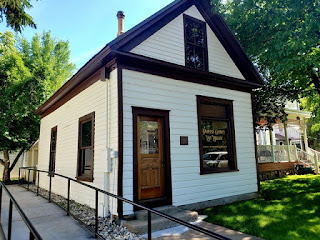 It is still in use as the Plumas County Law Library and is the oldest law office still in use in the state of California. It's also the smallest law library I've every seen.

In 1868, Wells Fargo agent Charles Kaulback finished a house for his bride, Mary Loring. We talked to the father of the current owner who still uses it as a family home.

While we've skipped over quite a few of the stops on the tour, these highlights give you a sense of some of the history you can find along this great, wheelchair accessible walk that stays within the compact confines of Quincy's downtown. 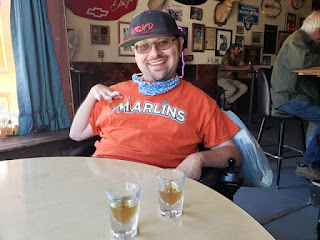 We've worked up a thirst, so we're going to slake that at the Plumas Club, a great Clamper dive bar (Clampers are member of E Clampus Vitas, a historical club that likes to have a good time) where we can get a cold, cheap beer before heading back to the inn.