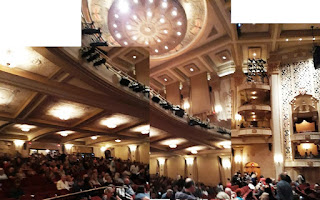 We went from having no trips planned for this season to three trips real quick. That's life when hitting the road is pretty much second nature. First up is this overnighter just up the road to Santa Barbara where we'll be taking in some food for our soul, not to mention food for our stomachs, too.

You have to know that my favorite musician ever is William Royce Scaggs, better know by his high school nickname of 'Boz.' I'm the bane of bar singers everywhere when I go up and ask them "do you know anything by Boz Scaggs?" I usually get looks of puzzlemen and a quick "no" but in Memphis, I get more enthusiastic yes's.

Boz has a great way of mixing blues, smooth jazz, and rock into some very good songs and always...always...plays with a very tight band of professional musicians with a very unique and strong voice.

That's where the genesis of this trip begins. I keep saying I want to take in one of his shows but during my working days, I could never find a date that worked with my weird hours. Now that I'm retired, that's not a problem anymore.

What is a problem is the price of the tickets. Bad seats at local shows are heading upwards of $200 each. Ouch. I pretty much ruled out the current tour but at Boz's age of 74 I won't have that luxury for too much longer, I'm afraid. 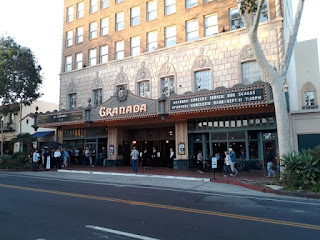 A friend's post on Facebook about a Scaggs show she attended inspired me to take another look. Lo and behold, a show I hadn't see before in Santa Barbara opened up where we could get wheelchair accessible tickets in the front row of the orchestra section for $74 on a Tuesday night. My wife said "do it."

Now we find ourselves late on a Tuesday morning, heading up the Ventura Freeway. Just a few lingering effects of the morning's rush hour stall us for some minutes in Encino but we still make a good time of less than two hours.

We're still a little early for check-in at our hotel. The manager says they don't even check for available rooms until 1:30pm so we go to look for some lunch.

At a hidden shopping center next door, we find a little trattoria serving some outstanding and cheap pasta and pizza. 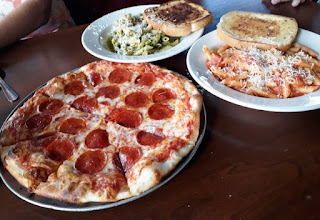 At Presto Pasta, we share this pizza and two plates of penne. One with pesto and the other with an outstanding marinara sauce.

Lunch over, we check in to our hotel, the Lemon Tree Inn. It's one of the city's budget lodgings and, at $125 a night, is actually around twenty dollars less that the local Motel 6 (that's cheap in this very popular beachfront city getaway for L.A.). 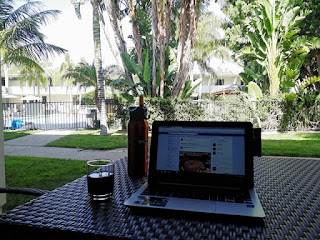 We opted for a ground floor, non-ADA adapted room with two queen beds. The toilet door will be tricky but barely doable. Otherwise, it's a fine room with plenty of space for the wheelchair. A large door opens up to a patio that is a few feet away from the pool in a richly landscaped courtyard. 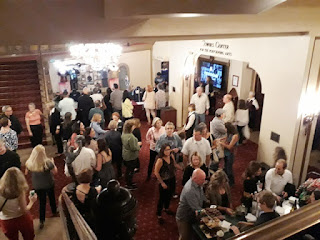 Showtime finds us having some wine then wandering into the the Granada Theatre. This richly restored 1924 era auditorium will be a fine place to take in the show. 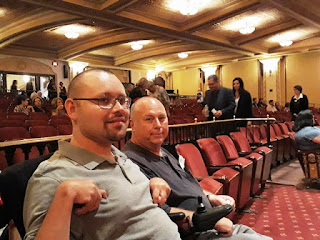 The three of us find our seats easily...front row of the orchestra section but we're still about ten rows back from the stage.

Promptly at 7:30, Boz and his band take the stage. 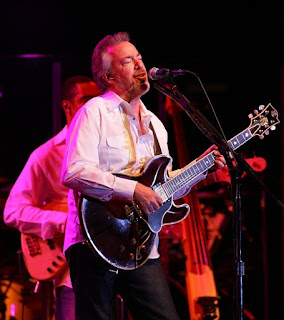 Picture courtesy of Dwight McCann
under CC BY 2.5 license

It's a great show and only a few times to people standing in front of us block Tim's view, which is something that mightily upsets my wife. It's only for a couple of songs near the end of the set, though. Tim says he's not bothered by it.

Knowing his audience is not the young nightlifers that they used to be, Boz and his band wrap things up at a still early 9:15. That gives us some time to wind down and relax in our room before calling it a night.

In the morning, I have a hankering for some chilaquiles and eggs. Santa Barbara is known for having a lot of good restaurants so I do a Google search for the best in the city. What comes up is a restaurant on San Andres Street called Su Casa. 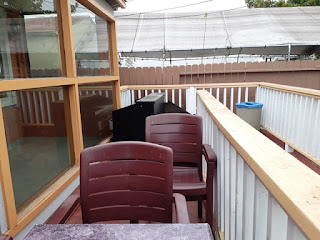 We pack our bags and head over. Unfortunately, the restaurant seems to think the wheelchair ramp is a dandy place to store a metal cabinet and chairs. We don't see anybody around to move it so we move on to Ventura. 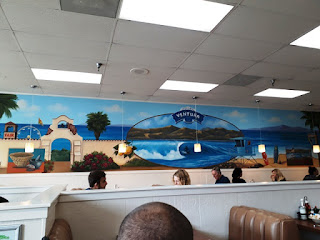 Here, we find an old favorite, Eggs 'n Things, in a large shopping center just off the freeway. 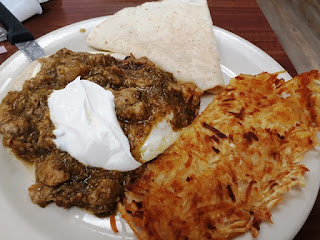 They don't make chilaquiles here, to my dismay, but this plate of chile verde and eggs is a good substitute. 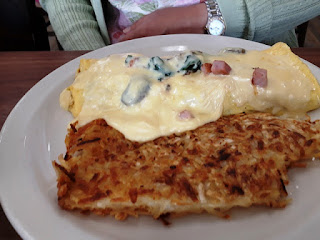 Letty has this tasty omelet... 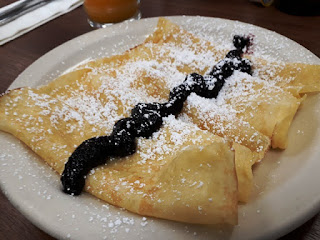 ...and Tim has these tasty blackberry Swedish pancakes.

It's just a quick overnighter for the show so we're back on the road to home.

Darryl Musick
Copyright 2018 - All Rights Reserved
Posted by D. Musick at 4:30 AM