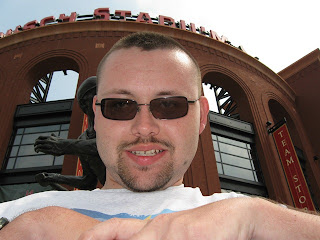 If you haven’t read Tim’s reports on preparing for this trip (this is his first time planning a trip), be sure to check out what it took to plan and prepare for this trip in a wheelchair.

In Part 1 of this report, we arrive in St. Louis to a fabulous hotel, get frustrated at a very inaccessible national park, and take a cruise on the Mighty Mississippi.  Now, it's game time.

It’s a short, two block walk to Busch Stadium from our hotel. Knowing us though, we walk to the part of the stadium furthest from our seats, so we need to walk around it back to home plate to find the Will Call booth to pick up our tickets. We do and head on inside. 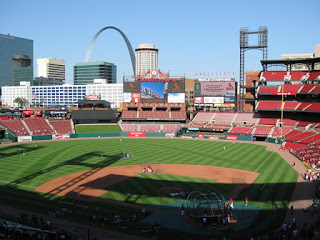 Our tickets today are in the Infield Redbird Club. This is a semi-private (meaning anyone can buy tickets to it but only ticket holders have access to it) section next to the press box overlooking homeplate from the first base side to the third base side. It’s the second deck up. We sit on the third base side in the closest accessible seats to home plate. There is an overhang from the deck above but it does not block our view in any way. We have great views of the city, the arch, and our hotel just beyond center field. 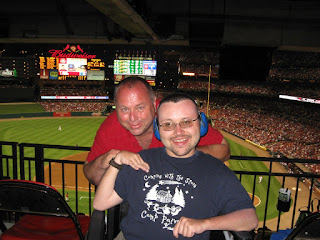 The club also has an expansive indoor area with tables and booths. There is a large food court with ballpark staples like hot dogs, beer, and popcorn. There are also more specialty foods like pulled pork, barbecue, salad bar, and an Asian stir-fry bar that my wife took advantage of.
Each end of the food court area features a full bar. Unfortunately as you might expect of a team owned by InBev (and Anheiser Busch), all the tap beer is Budweiser, Bud Lite, Bud Select or some other variety of the town’s most famous product. It all tastes like water to me. They do serve a nice selection of microbrews and other brands, but only in the bottle. 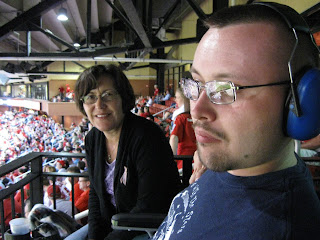 Another knock on the stadium is that the food and drink prices are the highest we’ll encounter on the trip. Knocks aside, this is still a great stadium in one of the great baseball towns. Stadium toured, food and drinks purchased, it’s time to play ball as the Cardinals are hosting the Houston Astros…one of the worst teams in the league right now.

Ryan Ludwick scores in the first inning on a Matt Holliday ground out to give the Cards a quick 1-0 lead. Houston kills the no-hitter hopes in the third as Tommy Manzella gets a single but no runs are scored. Ludwick scores again as David Freese gets an RBI single.

That’s where the game stays until it all comes apart for St. Louis in the 7th. Carlos Lee of the Astros gets on first due to a throwing error. Hunter Pence doubles, sending Lee to third. Starter Brad Penny loads the bases by hitting Houston third baseman Geoff Blum. Two runs score on a Tommy Manzella sacrifice fly to right field. Pinch hitter Cory Sullivan brings Pence home on a single. Sullivan scores when center fielder Michael Bourn bunts a single.

Penny is taken out after this inning and replaced by Jason Motte. While the Cards were able to get another run in the bottom of the 7th, Motte gives up solo homers to Lance Berkman and Hunter Pence bringing the final score of the Cardinals loss to 6-2. 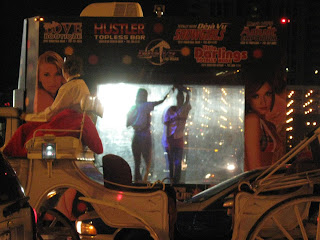 As any fan can tell you, a loss is tough but it’s still better than not being at the game. Being out-of-towners, we aren’t heartbroken and still have a fun time. On the walk back, we see this strange looking truck. A closer look shows there are two (clothed) strippers working a pole. It’s a moving billboard for several local strip clubs.

On a warm morning, fortified from our hotel breakfast, it’s time to explore the city. There’s a riverfront district called Lacledes Landing that looked interesting when we first got into town. We walk to the nearest Metrolink station about 3 blocks from the hotel. Metrolink is the trolley system here in St. Louis. My wife complains that it was just as far to walk to the station as it was to Lacledes Landing. Close, but I still think the trolley was closer plus I wanted to check it out for a future transit report.


Metrolink is 100% accessible. Every station has an elevator or is ramped. Each car has 4 locations where a seat can be folded up and a wheelchair put in its place.

We get day passes for my wife and I. It’s cheaper to buy each ticket separately for disabled riders ($1.10 for the trolley and $1 for the bus vs. $8 for a day pass) for the amount of rides we will take. 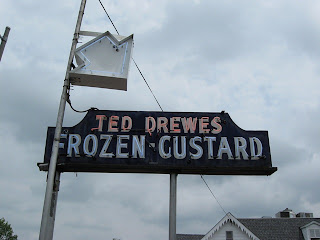 Back on the trolley, we head to the end of the line at Shrewsbury on the southwest side of the city. By this time it was hot and muggy making the ½ mile walk we took excruciating. We were going to Ted Drewes Frozen Custard shop on the old Route 66. 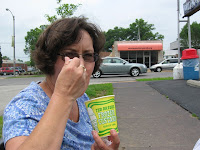 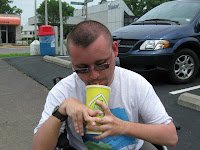 We’ve heard about this place on many shows on the Food Network and the Travel Network as one of the icons of Route 66. This is particularly interesting to us because we live adjacent to a stretch of the Mother Road. 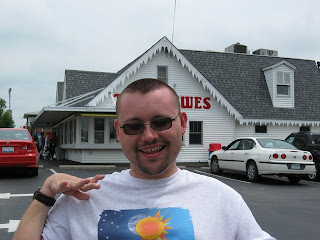 It’s hot and the custard is good but it’s halfway melted before we find a place to sit and eat it. By the way, Ted Drewes does not have a dining room, a dining area, or anywhere with tables or chairs. There are some bus stop benches on a nearby sidewalk, but that’s it. A bit of a disappointment after coming all the way out here. 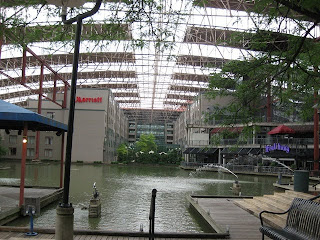 On the way back, we stop at Union Station which used to be the massive St. Louis railroad station. It’s still massive and the old train barn is as huge as some of the stations I’ve seen in Europe such as Munich or London. Only thing is, it’s not a train station anymore. Now, it’s a mall with a small man-made lake, some restaurants, and a Marriott hotel. It’s very quiet and not bustling with life at all. It would have been nice if at least one or two platforms could have been saved. Amtrak now stops and a small platform near Busch Stadium. 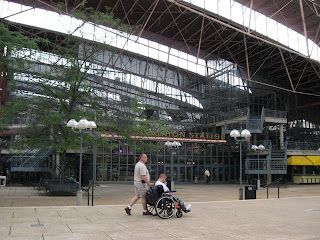 I’m a bit disappointed in it.

We go back to the hotel, have dinner, and take a swim in the 8th floor pool and call it a leg. Stay tuned as we head out to leg three of this Midwest Baseball Tour…Kansas City, Missouri.

Darryl
Copyright 2010 – Darryl Musick
All Rights Reserved
Posted by D. Musick at 4:51 AM