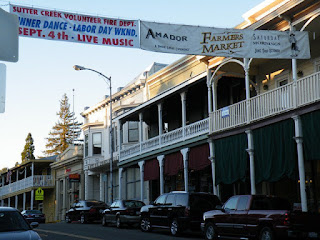 After a rather mediocre start to our house hunt in the outskirts of Sutter Creek, California, we're moving on to the city proper and inspected a brand new house about a quarter mile away from downtown Sutter Creek.

Tammy takes us up the hill to a nice street, Foothill Road. This is more like it.

Here is a beautiful, 1460 square foot home with 3 bedrooms and 2 bathrooms on an almost 10,000 square foot lot. With everything new, it looked much nicer and doable than the last house.

A couple of nagging issues for us were that the hallways were still a bit narrow, as were the doors. Tammy was suggesting that we could widen the doors for Tim's bedroom and bathroom but, with a price that was $29,000 over our budget, it would be hard to do financially.

Outside, the back and side yards would need to be landscaped. The sprinkler timers were also very cheap, battery powered hose mounted devices that didn't sit right with me. Inside, the living room had a spot to mount a TV way up high on the wall over the fireplace, with a view marred by a ceiling fan.

Still, everything was brand new. It was a great neighborhood, if hilly for Tim's chair, and was in the heart of one of Amador County's most desirable areas. A lot better than the last house we saw but still had some significant issues.

(Note: we eventually passed on this house. As of this writing, it is still on the market at a reduced price of $399,000-Ed) 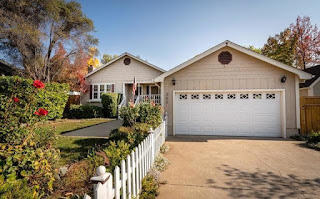 Just a couple of blocks away was a house that had just come on the market. At about 30 years old, this house on Gold Strike Court was like the house we just saw but more mature. Great landscaping, beautiful interiors...including a laundry room that was almost as big as our current bedroom...but still a bit out of our range at a matching $429,000.

It was also way up on a hill, which would mean a tough time for Tim on the streets here. 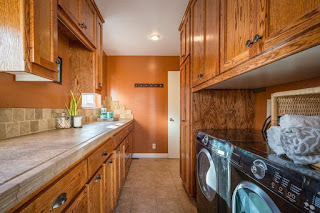 This one also had steps which meant we would need to build a ramp to get in.  With 3 bedrooms, 2 bathrooms, 1600 square feet on a third of an acre, I could see Letty making plans to make it ours and trying to figure out a way to afford it.

We had a front runner.

In nearby Jackson, a very cookie-cutter, boxy house was quickly eliminated and that house on Gold Strike Court was looking very good.

Next, we were heading down the hill to the tiny town of Ione to look at a couple of more contenders. It seemed like a waste of time, since my wife had already mentally picked out her new home but we'll play this game out.

Those two houses will be profiled in our next report.