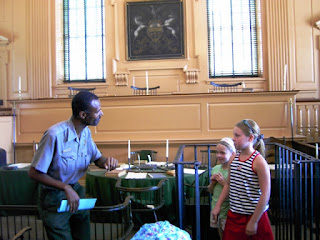 Penn Station, in New York, is appropriately named. We’re leaving here for Pennsylvania today. The station itself is a rabbit warren of a maze, especially if you’re in a wheelchair looking for that elusive ramp or lift to the next level. While Grand Central Station is massive, with soaring ceilings, stone walls, and magnificent artwork, Penn Station is cramped with low ceilings, dry wall, and has all the charm of the post office.

It’s hard to navigate our way through. Penn Station has notoriously bad signage, and it takes us a couple of laps to figure out where we’re going. We finally find the Amtrak ticket counter and lounge and also receive the bad news that there will be no checked baggage on this train. Our big suitcase (we all share one big suitcase along with each of our small carryons…you just can’t avoid checked baggage with a wheelchair) will have to ride with us.


Once the hectic pace is done and we board our train, with the help of Amtrak’s staff and a wheelchair lift, it’s a quick, 75 minute ride through the “scenic” wonders of New Jersey to the station in Philadelphia.

We pick up our rental car, a Suzuki Grand Vitara…which my wife keeps calling the Grand Viagra. It’s doable with a manual chair and is not too hard to transfer Tim into the front passenger seat. It is pretty stained due to sitting under a wet, rusty roof in the parking lot. As long as it runs well, which it does.

We head west out of Philly to our destination of West Chester. Our intention is to stay in this quieter suburb and take the train into Philadelphia for sightseeing and activities. Arriving at the West Chester Microtel, we notice a lot of construction going on. We booked Microtel because you can guarantee a roll-in shower on their web site. I had called the week before to confirm that. However…

We are told that the lady staying in the room we had booked does not want to leave and that there is nothing the hotel can do. Funny, because I remember being told “no” in no uncertain terms once when I wanted to extend my stay because someone else had booked that particular room.

What to do now...I was offered another room at the hotel but there was no other accessible room that we could use. I was adamant that it had to be accessible, Tim needed somewhere to bathe. The manager offered to put us up at another nearby hotel. I agreed as long as it was an accessible room.

The “best he could do” was the Microtel at the Philadelphia airport. I told him that I specifically avoided that location because I did not want to be near the airport…which was also not close to where we were. I was told it’s only a 30 minute drive and basically “take it or leave it.”

A 2-hour drive later puts us as the Microtel, Philadelphia airport. Indeed, it was an accessible room with roll-in shower and a good staff. The whole experience, especially when I complained to the corporate office and the manager of the West Chester location e-mailed me back, angry that I had complained when they had “done so much” to accommodate us, put me off of the Microtel brand…which usually comes highly recommended by travelers with special needs.

Bad hotel experience behind us, we decide to enjoy what we can. It’s a Thursday morning, so we decide to take a drive around the city to see what we can find before we go to our ball game. 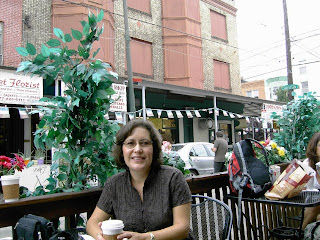 We’re driving around, just south of downtown, when we make a random turn and find blocks full of old looking stalls looking like something from Little Italy around the turn of the 20th century. It’s looks very interesting, so we park and start walking around. It turns out that we stumbled onto the Italian Market (forgive me, but I’d never heard of it before), a marvelous place with many old-time grocers, meat markets, cheese shops, fish mongers, bookstores, and restaurants spilling out into their stalls in the street. We find a place that sells pizza for breakfast (!), have a couple of slices along with donuts and coffee. 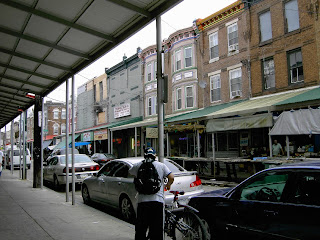 It’s a lot of fun just exploring. We go into a nearby butcher shop, D’ Angelo Brothers, and get some dried meat for later. I ask the lady working behind the counter what the deal is with this neighborhood and she explains to me that it has changed relatively little over the last 100 years or so. Families still run their businesses, as theirs does, being passed down through the generations. She shows me a butcher block, worn down into curves, that has been in continuous use for over a century.

What a fascinating place. We continue on looking in all the shops. 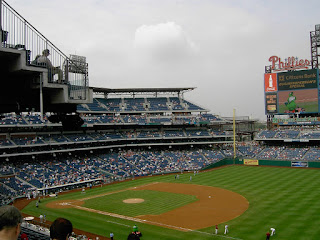 Come game time, we head even farther south to Citizens Bank Park, home of the Phillies. It’s a day game versus the Los Angeles Dodgers. Being an Angel fan, Tim despises the Dodgers so he finds it easy to root for the home team. I’m pretty much indifferent about L.A.’s team. I liked them when they were owned by the O’ Malleys; lost some enthusiasm when Fox ran the team; and can’t stand the ownership team of the McCourts so I heartily cheered the Phillies on too.  Our seats were in the second deck, in right field, on a straight line with second and third base. 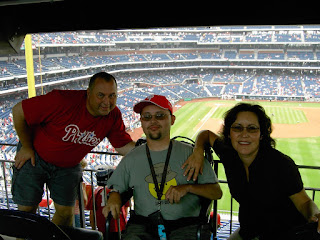 Being at the top row of that level, we were shaded on what turned out to be a hot and humid day. Surrounded by 5 food stands, a souvenir shop, and nearby restrooms, we were set.

We had a great view and hung out with some great Philly fans that were gracious and friendly with the out-of-towners. The staff was friendly too. We had some great ushers who kept our area clear and told us where the best food in the stadium was. 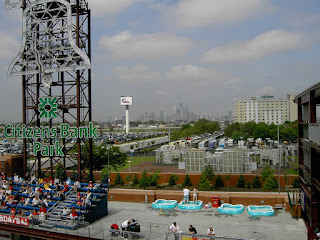 The "Pool Suite" at Citizen's Bank Park
Unfortunately, our cheering didn’t work because the Phillies went down to the Dodgers that day but they’d rebound to make the playoffs and then take the World Series the next season. 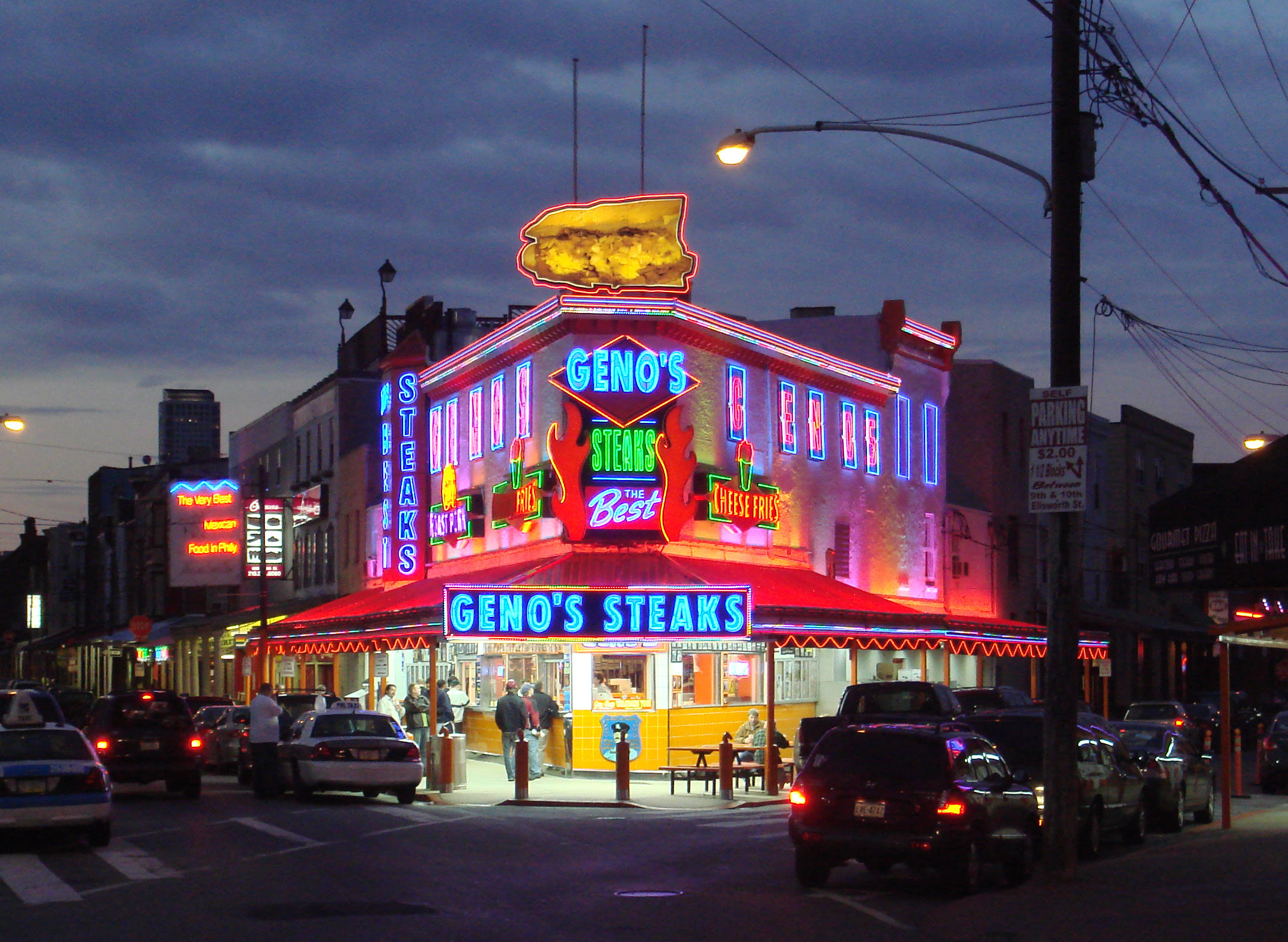 After the game, we had a choice to make...Pat’s or Geno’s. We make our way north a ways to find the center of the cheese steak universe on the corner of 9th Street and Passyunk Avenue. The two Philly Cheese steak legends duke it across the street from each other…Pat’s a kind of plain-Jane looking stand while Geno’s is a garish neon outpost that I don’t doubt can be seen from space. 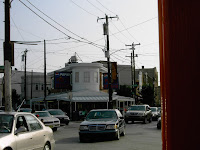 Pat's and Geno's
Which one to choose? They both have their fans and detractors and both seem to be good so it came down to which one has the shortest line. At this time, that would be Geno’s so off we went.

Ordering at either of these places can be intimidating. Signs are posted on how exactly to order. Kind of in a Soup Nazi way, you make your way to the first window where you order your sandwich and you must be ready. Know what you want…steak sandwich; cheese type (provolone, wiz…cheese wiz, or American); wid (with onions) or widout. People who are indecisive are sent to the back of the line to start over. After the sandwich window you go to an adjacent window to get your drinks and fries.

At Geno’s, you are also faced with signs that proclaim that this is America, when ordering “speak English,” which has caused no shortage of controversy (and free publicity) in this town. Owner Joe Vento says his family had to learn the language when they came to America and encourages others to do the same. Despite the sign, he says he’s never refused anybody service due to their language but says that he can’t guarantee their order will be right if they don’t.

Once past the intimidating gauntlet of procuring your food, you take it to one of the outdoor tables and dig in. It is a delicious, juicy, cheesy, greasy pile of sliced rib eye on a bun. I have no dog in this fight, so if you are put off by Geno’s English bias, try Pat’s across the street where you just have to run the same drill in ordering. It’s a Philly thing and despite the intimidation factor, the people there are nice. Go for the unique experience and the delicious sandwich. 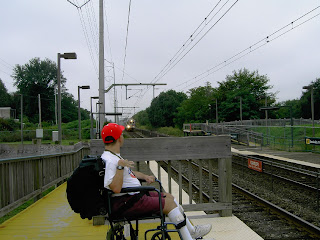 Across the street from our hotel is a station for the SEPTA commuter train. The next morning we leave the car behind and take the train into the city. At the Reading Station, we get breakfast at the adjacent Reading Market which is an expansive indoor market with produce sellers, butchers, meats, and more…kind of like an updated Italian Market. They have an Amish themed “Pennsylvania Dutch” section where we have some unbelievably good soft pretzels.

One more stop on the line puts us at Independence National Historical Park. Here is where you go to see Independence Hall and the Liberty Bell.

At the visitor’s center, we pick up our free tickets for a tour of Independence Hall. We have about an hour to wait (each ticket is good for a specific time), so we head across the street to Christ Church Burial Ground to find the grave of Benjamin Franklin. There are also four other signers of the Declaration of Independence buried here. We pay the $5 admission to get in, only to find that Franklin’s grave is right next to the fence…we didn’t need to go in to see it. It is covered with pennies from people who toss them on as a tribute to him…a penny saved is a penny earned. 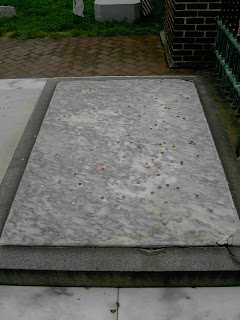 Franklin's Grave
Wandering through the cemetery, I notice a fresh grave. I ask the caretaker if they still bury people here. Yes they do, although it is just for people who have already bought plots. They are selling no more but he said they’d make an exception if someone notable like a U.S. president wanted to be buried here. 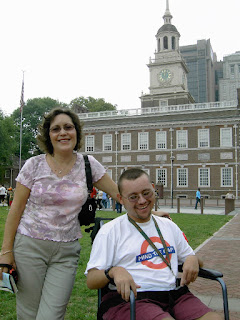 It’s time, so we head over to Independence Hall for our tour. There is a security point manned by some very nice and patient people who go through every nook and cranny of your bags before passing you through the metal detector. 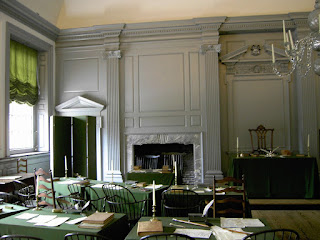 This is Where It Happened
Inside, we are lead by a ranger on a tour of the old courtroom which is across the hall from the meeting room where the Continental Congress met, drafted, and signed the Declaration of Independence. Of course, you can just feel the history oozing throughout even though most of the room is recreated. George Washington’s Sun chair at the top of the podium is the real deal though.

The tour continues upstairs and Letty goes on up while Tim and I wait below due to the inaccessibility. We are shown a photo album of what is upstairs while a ranger explains it to us.

When the tour is over, we wander around the shady grounds for a bit and explore the surrounding historic neighborhood. It is still hot and humid and I can imagine how our founding fathers must have felt without air conditioning in the beginning of summer. 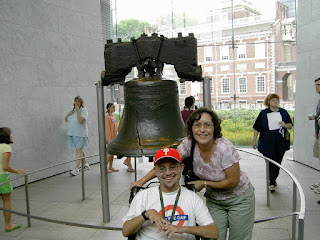 Across the street, we go and see the Liberty Bell, which is in its own display building. Another security point must be negotiated before you see this but it requires no tickets or advance notice to see.

Our afternoon of history over, we wander over to the Delaware River, separating us from New Jersey, and find a Belgian pub with some great, refreshing brews to help cool us off before going back to our hotel.

And with that, we’re done with Philadelphia. Part 2 follows below and we travel to the land time forgot, Lancaster and Amish country.