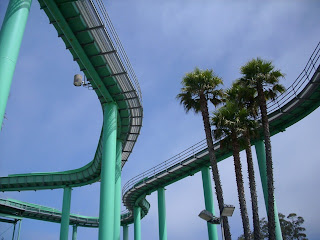 Everybody knows about Disneyland, most people know about Knott’s Berry Farm and Universal Studios, and many also know about Six Flags Magic Mountain.  Those make up the Big Four amusement parks in Southern California.  What most don’t know is that there are several smaller parks dotted around the region.  Today, we’ll focus on those in the area east of Los Angeles known as the Inland Empire (IE).

Besides seeing a slice of Americana you’d be hard pressed to see in the neighboring area to the west, these smaller parks have an added advantage of being at least half the price of their better known Southern California brethren.

Fiesta Village is a small park in Colton, just off of the 215 freeway at Washington Street.  A hillside location and a surplus ski lift enabled it to open up some popular waterslides in the summer, expanding on their miniature golf.  Now, they’ve added a few small amusement park rides for thrills and a roller rink for spills.  Free admission, various charges for rides and attractions. 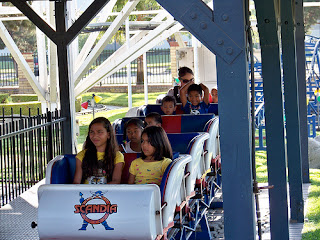 Picture courtesy of Flickr
Lorena Javier under CC-BY license
Scandia, part of a chain of family fun centers, operates a fairly extensive park next to Interstate 15 in Ontario, between the 10 and 60 freeways.  Of note here is the Scandia Screamer, a highly rated roller coaster that will give you some real thrills as it dives through its metal skeleton.  Also featuring such standard rides as tilt-a-whirl, hammerhead, and a swinging ship.  Free admission, unlimited ride passes are $22.95 for adults and $17.95 for kids.  Individual ride tickets are also available.

The granddaddy of the Inland Empire amusement parks is Castle Park in Riverside, along the 91 freeway between the La Sierra and Polk exits.  Started as a miniature golf course in 1976, this park was the product of the imagination of Bud Hurlbut who created such iconic rides as the Log Jammer and the Calico Mine Train at Knott’s Berry Farm.  Now owned by a large amusement park company, the park has over thirty rides including three coasters.  It’s also home to a large and imaginative mini golf course and a go kart track.  Ride park admission is $21.99 for adults and $14.99 for kids which includes unlimited rides.  Separate prices for other attractions.

-Darryl
Copyright 2010 – Darryl Musick
All Rights Reserved
Posted by D. Musick at 7:04 AM