From No Man's Land to Tourist Trap: Cold War and Nazi Sites in Berlin 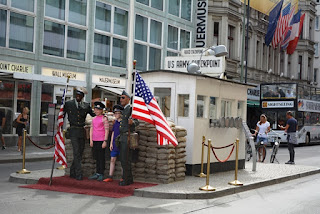 (Please read our Covid 19 Statement first - Ed) Forty years ago, I could be shot for standing on the spot where I'm at this morning. Today, it's a bit more innocuous with the McDonalds nearby, the 'Wall" museum, a replica of Checkpoint Charlie in the street median where actors in military garb will pose with you for three Euros, and a sandy beach bar on former No Man's Land behind the leftover segments of the wall that for three decades served as a focal point of the Cold War between the Soviet Union and the United States.


People have been killed for trying to pass this little strip...a line drawn on the map, basically...behind the cart selling t-shirts and trinkets off of Freidrichstrasse.  I'm having trouble dealing with the incongruity of it all. 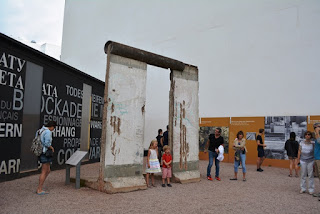 Little did Erich Honecker realize when he built this barrier to keep his people from fleeing to the west that he was building one of the world's biggest, crassest, and Capitalistic tourist traps.  A bit ironic.

While this intersection around the most famous of border crossings between East and West Berlin has devolved into a crowded, money grabbing, photo opportunity, there is still plenty to see about the Cold War and World War II in today's Berlin without having to feel a bit like a sell-out to do so.

We've rested up for a couple of slow days and started off with another little Cold War excursion to the Bridge of Spies in suburban Potsdam yesterday. Now, we're in full gear as we have a full day of touring to accomplish in central Berlin.

Our hotel on Potsdamer Platz is two blocks away from three train stations. It depends on which way we're going as to which station we'll head to. Today, it's Yorkstrasse station. Three lines converge here but only the S1 is wheelchair accessible. That's the line we'll take.

We exit at the Brandenberg Gate station but the lift is out of order and has not been reported yet so we have to backtrack one station and walk an extra two blocks. 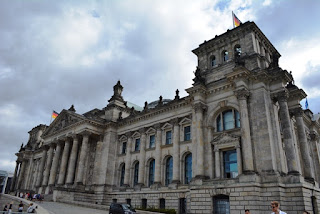 We're starting at the seat of German government, the Reichstag, where we have an 8:30am reservation to take the lift up to the roof. We're reminded this is an official seat of government when we have to process through a rather strict security screening and get an official escort (because of the wheelchair, we have to take a slight detour to the lift) before we can go up.

At the top, we get an English language brochure and a player with an earpiece for an audio tour. 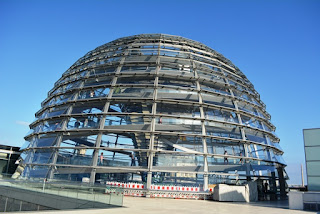 Heavily damaged during World War II, the building has been rebuilt with a glass dome overlooking the Bundestag (the German Parliament).  A large terrace on the roof surrounds the dome where 360 degree views of the city greet us.  There's also a restaurant up here but we didn't take advantage of it today. 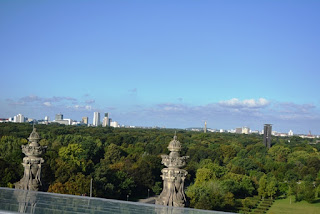 While Letty takes pictures, Tim and I take a slow lap around the roof looking towards the tall TV tower in the former east, the Brandenberg Gate, the very large Tiergarten park, and even a former CIA spy base on a hill off to the west. 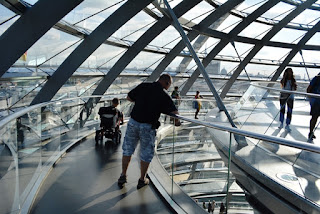 When we're all set with the picture taking, it's time to climb the dome. This is where the audio tour kicks in. There are two spiral ramps, both wheelchair accessible, one for going up and the other for going down. 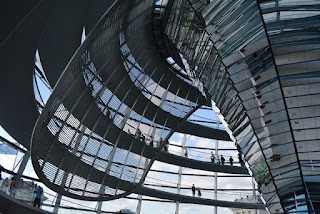 The audio tour tells us as we go up about the wall, the Brandenberg Gate, how all the trees in the Tiergarten were cut down for firewood after the war and all the trees we see now only date back to the 1960's. There's a solar panel that moves with the sun that shades the legislators working below.

It's all very interesting and fits in the budget...it's free.  You just need to make a reservation ahead of time on their website. It's one of the more spectacular buildings in Berlin. 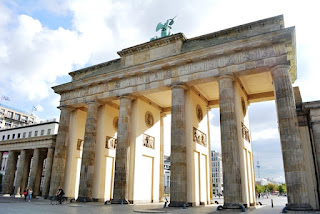 Afterward, we make our way over to the Brandenberg Gate, another site where you could have could have been shot 40 years ago just for standing there. Next door is the U.S. embassy which leads us to the Holocaust memorial, a collection of thousands of stellaie commemorating the enormous loss of life due to Hitler's final solution. 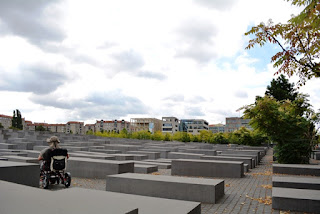 Barely wheelchair accessible, it's a maze into the dark depths of the absolute depravity of the Nazi's view of the world. You start out with short, knee-high blocks and slowly descend until they're over your head and completely obliterate the city around you. It's a descent into darkness that you won't forget and an amazing effect. 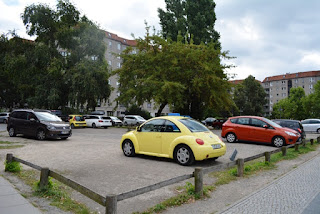 Next, we amble down the block. Past the t-shirt and doner kabab stands to a little, unremarkable parking lot.

It's here that the nexus of evil in this world came to a gruesome end.  For years, no one wanted to mark this site but such an important and infamous site couldn't be hid forever.  It took until just a few years ago that the government finally decided to put up a rather plain little sign saying what the significance of this site is. 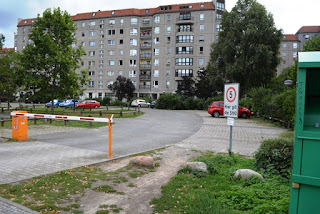 Under this parking lot, somewhere near the 5 mph speed limit sign, one of the most evil persons every to walk the face of the earth...Adolph Hitler...took his own life in his underground bunker as Soviet troops drew near.

The little grassy spot behind the sign, next to a couple of empty parking spots, is where his cronies attempted to burn his body.

This rather plain (and purposely so) parking lot is where the Third Reich met it's ignominious end.

That's probably enough for this post, we'll catch you up on this tour on the next installment.

Photos by Letty Musick
Copyright 2016 - All Rights Reserved
Posted by D. Musick at 4:30 AM