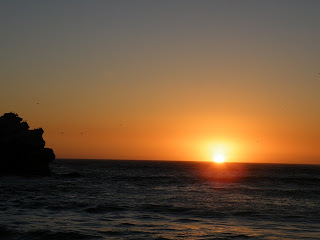 While strolling along the commercial fishing wharf in Morro Bay, we encountered a couple from Germany and got to talking.  We talked about our love of Munich and Bavaria and then asked what they thought of this little town.

“It is very beautiful,” they replied, “but what is THAT?”

They were pointing at the one thing that keeps this little seaside town from becoming a real tourist mecca, the large power plant that mars the view on the north end of the bay.  They were aghast, mostly because they thought it was a nuclear plant plopped right into the middle of town.  Not to worry about that, I told them, it’s just a conventional plant that’s been there for half a century…I think they were confusing it with the Diablo Canyon nuclear generating station, which is located several miles south of here. 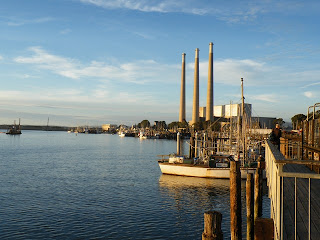 The Power Plant is Hard to Miss

Ignore the plant and you have a great, scenic, and reasonably priced seaside getaway.  It may just be because of that plant that the prices here are as low as they are.

Morro Bay lies due west of Bakersfield on California’s Central Coast.  This is the section of the state’s coastline that extends roughly from Santa Barbara on the south to just below San Francisco on the north end.  Many of the state’s gems lie along this route: Big Sur, Hearst Castle, Monterey, and Santa Cruz just to name a few.

We start off in Bakersfield and take Highway 46 over the coastal hills.  This is a lonely, scenic road and is historically one of the area’s more dangerous roads…it was nicknamed “Blood Alley” for the large number of head-on collisions.  About halfway over the hills, in a pretty little valley is the intersection with highway 41, is the spot where the most memorable of these crashes occurred. 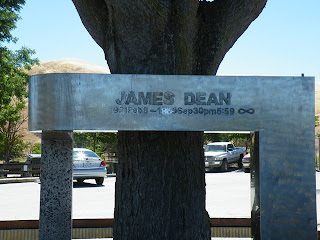 Here on September 30, 1955, actor James Dean…on his way to race his Porsche Spyder at Laguna Seca Raceway in Monterey…crashed head-on into a truck that crossed into his lane.  He died a short time later when he was taken to the War Memorial Hospital in Paso Robles.

Just up the road is a small diner where a memorial to Dean sits in the parking lot.  Walk around the back…signs warn you to watch for rattlesnakes…and you’ll see a line of trees.  That is the spot where the San Andreas Fault cleaves the state in two.

Driving carefully over the rest of the route, we arrive at Highway 1 just north of Harmony and turn south.  Somewhere in the hills to the left, another black day in the state happened when fired airline employee, David Burke, burst into the cockpit of PSA flight 1771 and shot the pilots dead.  The plane dove into the ground at full speed, killing all 44 aboard including the supervisor who fired him.

After this tour of gruesome California history, we see our destination shrouded in fog up ahead with Morro Rock poking through the low-hanging cloud.

Our hotel for this trip is the Best Western San Marcos Inn, just two blocks from the waterfront.   Barrier-free rooms with two queen beds are available and the hotel serves a free light continental breakfast along with a wine and cheese mixer every evening in the lobby.  There is no pool but instead a large hot tub with views of the bay.  Just about everything in town is within walking distance. 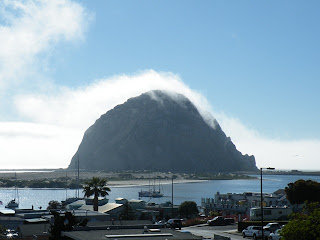 After checking in and taking in the view from our room, we head down to the water to have a look around.  Weaving in and out around the buildings on the wharf is a walkway where everyone can walk along and drink in the gorgeous ocean views.  The town has gone one step further and made this entire walkway wheelchair accessible.  It’s not a straight line, but you can stroll along the entire waterfront from the huge Morro Rock in the north  to the marina at the south end of the bay.  It is a very common site to see sea lions and otters frolicking in the water along the way. 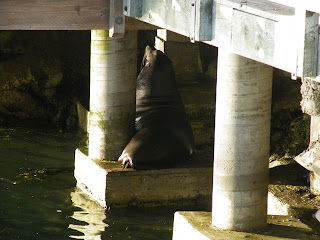 And the rock?  It’s the town’s signature feature.  A morro is a volcanic plug where the surrounding mountain has worn down exposing the rock underneat.  There are nine of these ancient domes in the area, Morro Rock being the most famous, spectacularly sitting between the town and the waves. 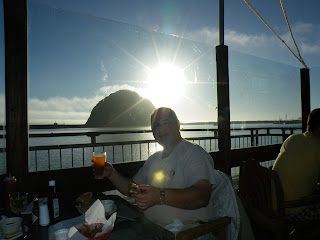 Dinner tonight will be at the Hofbrau where you can get a delicious beef dip sandwich, custom carved right in front of you.  There are a few German beers available, along with the usual suspects on tap.  We get some of these delicious sandwiches and sit next to the windows overlooking the water.  It’s a very inexpensive, good restaurant with a view.  That’s pretty rare. 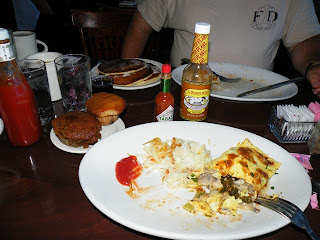 The next morning we have a delicious breakfast of omelets and pancakes at Dorn’s, a nice restaurant sitting atop a small hill overlooking the waterfront.  After eating, we head out to the rock. 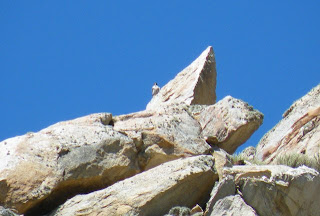 An unpaved, but fairly smooth path allows wheelchair to get a little ways around the rock toward the ocean.  Soon, however, the path will get too rocky to allow access all the way to the water.  For birders, looking up will reveal hundreds of nooks, crannies, and little caves where gulls and peregrine falcons nest.  We came upon a small group of watchers with telescopes set up on tripods who allowed up to look at a mother falcon guarding her brood. 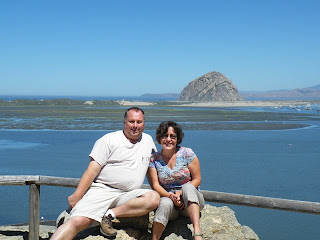 A drive across town leads us to Morro Bay State Park where another morro, White’s Point, sits next to the visitor’s center.  A path leads around the rock but the last hundred feet or so to the top is too steep to make wheelchair accessible.  Back at the visitor’s center, several spectacular views of the bay are barrier free.  The center is also undergoing a makeover to make it more accessible to wheelers. 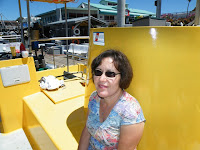 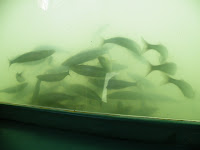 Back in town, we take a bay cruise on a boat with windows under the water.  It’s not wheelchair accessible but Letty and I take a quick ride to get pictures for Tim.  Another cruise operator at the north end of the wharf, Chablis Cruises, offers accessible tours on a more traditional boat.

After the cruise, we stroll around looking at the shops.  A garden center across the street has quite an array of custom fountains.  I come close to buying one for the yard, but decide not to when I think of how I will get it home. 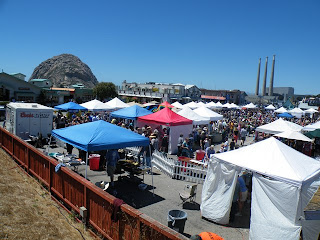 Today is the Morro Bay Music Festival and several bands are rotating through the main stage set up in a parking lot across from the wharf.  Up on the hill in the downtown section, there’s a great farmer’s market with more live bands…seemingly playing in every bar and corner.  It’s a very musical day here in Morro Bay.

I buy some fruit and cheese for a lunch snack as we sit back and listen.  An orchid greenhouse nearby provides a quiet getaway from all the action on the streets.

Dinner tonight will be at Tognazzini’s, an out-of-the-way restaurant nestled in with the commercial fishing fleet at the north end of town, based upon a recommendation from the skipper of the tour boat.  We are not disappointed with the fish and pasta dinner that we have. 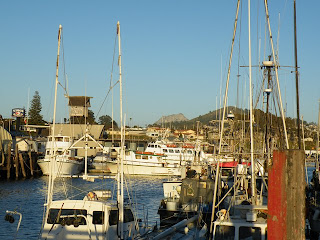 Afterward, we stroll along the fishing fleet as we take our last sunset views of the town. 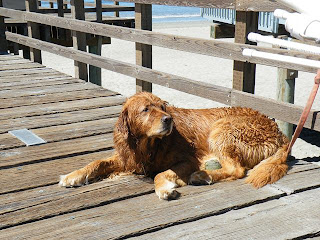 Checking out in the morning, we head south to the town of Avila Beach.  Formerly a run-down, funky ocean side enclave of hippies, fishermen, and surfers…the town is undergoing a renaissance thanks to a huge settlement and remediation given to them by the Union Oil Company whose oil facility leaked hazardous waste under the town for decades.  The oil company demolished a huge part of the town, removed the tainted sand, and rebuilt from the ground up.  Still funky but no longer run down, the waterfront is a sparkling jewel sitting on a beautiful beach. 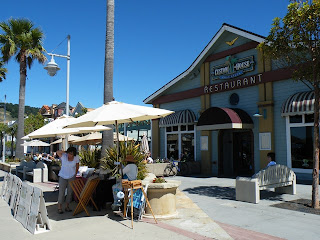 We have breakfast at my favorite omelet place in the world, The Custom House.  The previous incarnation here had a patio out back overflowing with plants and exotic birds in cages.  With the new building, the birds are gone and the new patio, while still beautiful, seems a little sterile without the birds.  The food is still great, however.

Nearby is the Harford Pier, built in 1873, where another local restaurant…Fatcats…sits on the hillside.  Many people, including my parents, swear by this little diner.  It is very good, but the linguica omelet at the Custom House always beckons me. 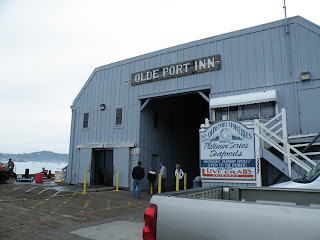 Being one of the very few piers in California that actually let you drive on it, we head out to the end where we find a handicapped spot and unload.  A nice but pricey dinner house, The Olde Port Inn, sits atop a bustling little fish monger shop.  At the end is a large platform where people set up to fish, no license required.

When I was a kid, we had a family reunion type party here and the several of us fishing caught 250 red snapper and netted dozens of crabs for the boilers we set up on the camp fire.  I don’t think there’s that much to catch anymore, but it’s still a nice place to drop a line. 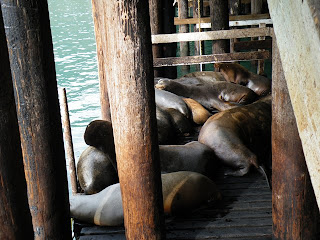 Down below on the boat dock platform, a dozen sea lions lounge on the wood.  Off of the pier, several more of the illiterate animals sit on a platform with a sign begging users to close the gate to keep the sea lions off. 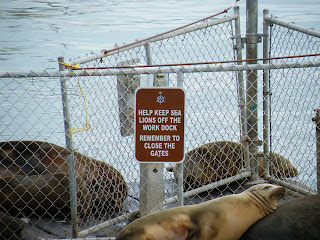 Refreshed and relaxed, we climb back into the van and head south along the ocean on Highway 101 back into L.A. and home.  It just dawned on me that I haven’t thought about that damn power plant at all since we talked to that friendly couple from Germany…just soak up Morro Bay and you’ll put it out of your mind too. 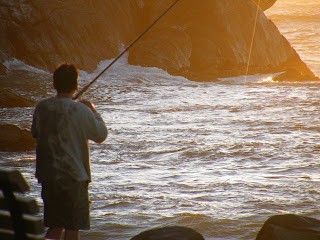 The Far Side of Morro Rock

Darryl
Copyright 2010 – Darryl Musick
All Rights Reserved
Posted by D. Musick at 4:30 AM