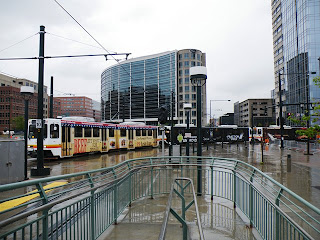 Denver is a very large city surrounded by a patchwork of smaller towns, plains, and mountains.  It's transit system is actively growing and is not quite a mature system.  Some things work quite well, others are OK, and there are still patches where transit is not yet a viable option.

Public transit here is provided by the Denver Regional Transportation District (RTD) and is a mix of light rail and buses. 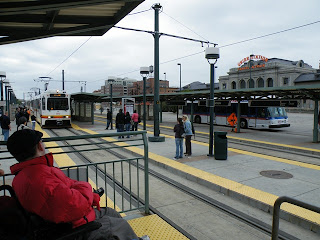 LIGHT RAIL - Currently, there are five lines that make up the light rail system.  It runs two lines to the south to Englewood and Littleton and terminates at two points to the north of downtown, 30th and Downing and Union Station at the western end of the 16th Street Mall.

Inside, the trains are clean, modern, and fast. For wheelchair users, there is a raised platform at the end of each station at the driver's end.  A manual ramp is deployed by the driver to allow chairs and strollers to board.  In this configuration, up to three wheelchairs or strollers can be on any given train.  The trains themselves have a much larger capacity.  Either 12 or 18 chairs/strollers can be on a train (depending on if it is a 2 or 3 car train) and if the platforms were built to train level instead of below it, more chair users could be accomodated.

New lines under construction are also following the lower platform model the current stations have.

Chair users must tell the driver where they plan on exiting so the ramp can be deployed.  This seems like a missed opportunity in universal design and puts an extra burden on wheelchair users that the general public does not have.

Another egregious lapse in the system is that it does not serve the airport but a line is under construction and service to the airport is expected to begin in 2016. To the west, a new line to Golden that will get you close...but not quite...to the Coors brewery will open in 2013.

BUSES - The buses run by the RTD are like most cities in the U.S.  A lift or ramp is deployed from the front door and up to two wheelchairs can be accomodated in each bus.  Tie-downs are installed in each position.

The bus system covers a much larger area reaching towns in the nearby Rockies to the west; Boulder to the north; Denver International Aiport to the east, and the county line to the south. 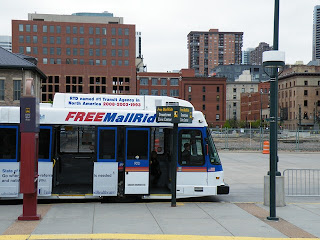 16th STREET MALL FREE SHUTTLE - One of the stars of the transit system here is the shuttle that moves people back and forth along the mile long 16th Street Mall from Union Station on the west end to the Capitol Building on the east end.  Just about anything you want to do in downtown is within 3 blocks of this route.

The buses are electric/hybrids and have multiple entry doors like trains.  Wheelchairs enter via the second door where the driver can deploy a manual ramp.  It's an easy entrance into the two wheelchair locations and tie-downs are available.  Buses run every couple of minutes and are among the easiest I've seen for wheelchair entrance and exit.  They are also free.

SKYRIDE - RTD also operates a bus service to the airport via large buses that serve Englewood to the south, downtown, Broomfield to the north, and Lakewood to the west.  It also connects with several light rail stations.  Fares run $9, $11, or $13 each way.

Unless noted above, the basic fare on buses or light rail is $2.25 (disabled $1.10), which is in the high range for most transit systems.

Day and multi-day passes are also available, which would make it a little more affordable for travelers, except that they're not available at the stations...you have to buy them at approved retailers such as Safeway.  This makes it pretty hard for a traveler to get one when they're in town.