It's hard to believe but recently Los Angeles was ranked as the 3rd most transit friendly city in the United States.  We've made huge strides here in this sun-soaked metropolis in public transportation in the last two decades and there's more to come.

We now have a subway, several light rail lines, and commuter rail to go along with our vast bus system.  The one thing we don't have (yet) are signs at the stops and most stations telling you when the next ride will be coming like they do in Europe.

There are some transit apps for your smart phone or tablet that can be utilized to various effectiveness.  We're going to put the top three to the test...NEXTRIP, NEXTBUS, and the LADOT App. 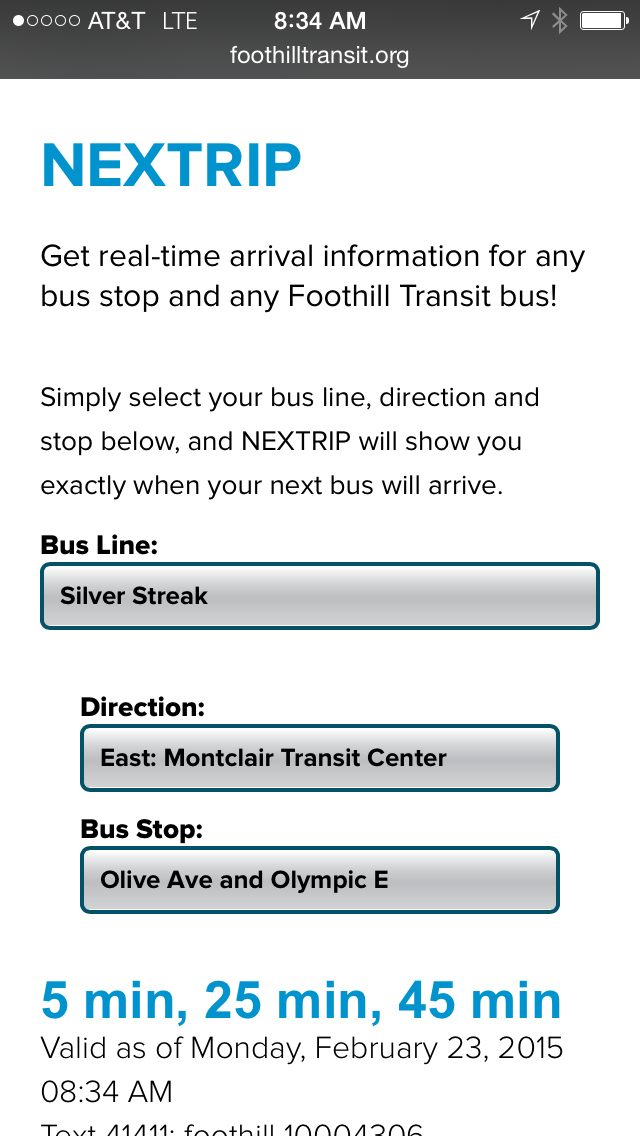 NEXTRIP is used by Foothill Transit to predict when the next Foothill Transit bus will arrive at your stop.  It's not too hard to use. You go to the site, www.foothilltransit.org/NEXTRIP ; find the bus line you're waiting for; and use the dial bar at the bottom to dial in your stop. When you press "Done" the next three predicted bus arrivals appear. 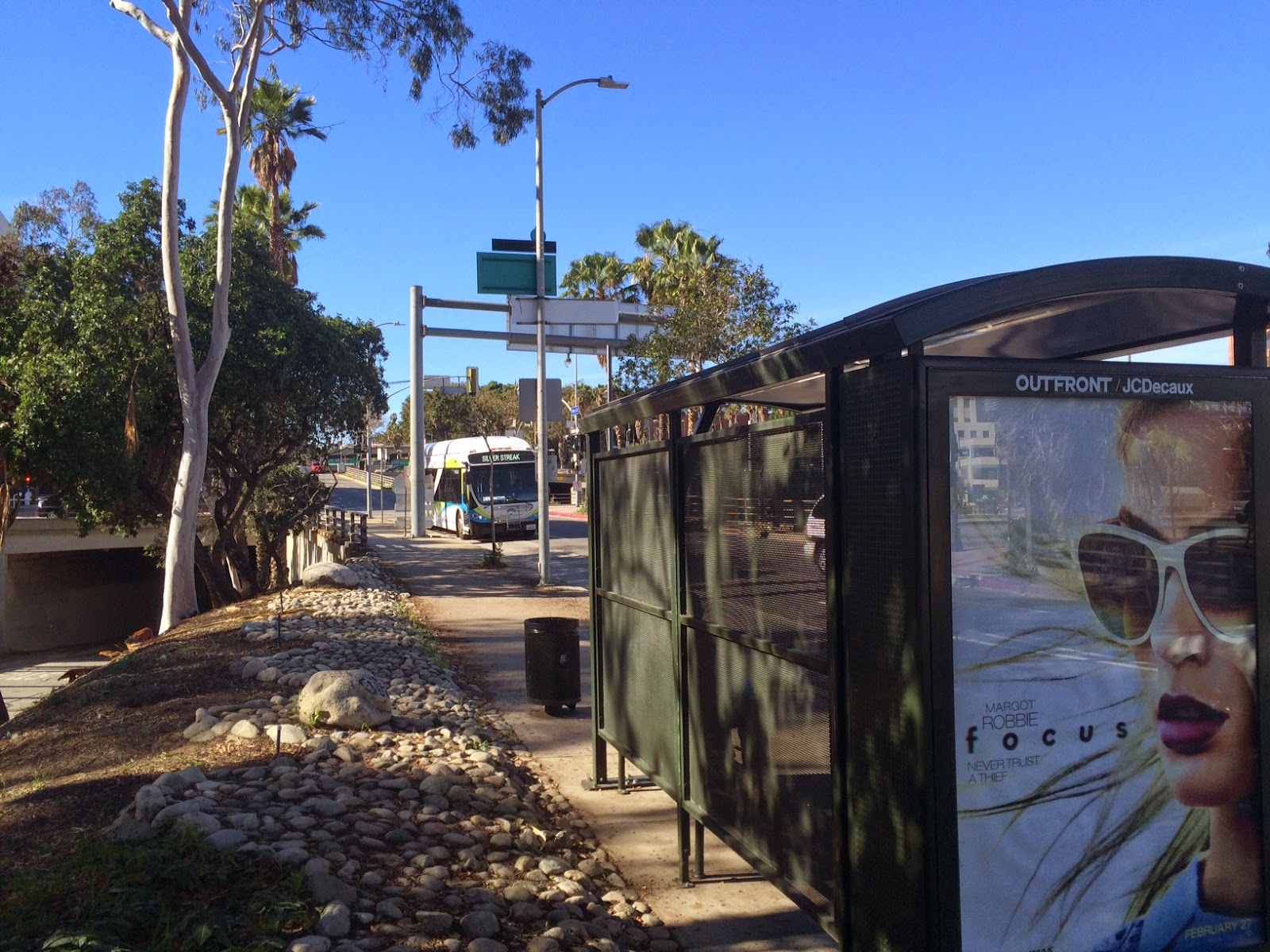 My Foothill Transit bus is only a minute late

NEXTRIP uses GPS technology that pairs the bus location to the stop chosen.

PROS: From the three or four tests I've done with it, it's pretty accurate. Bus arrivals were within a minute of what is displayed.

CONS: There's no reload button. You have to start at the beginning to recalculate or choose another bus stop.  It only displays Foothill Transit buses when there might be a number of buses using the same stop from other transit agencies. 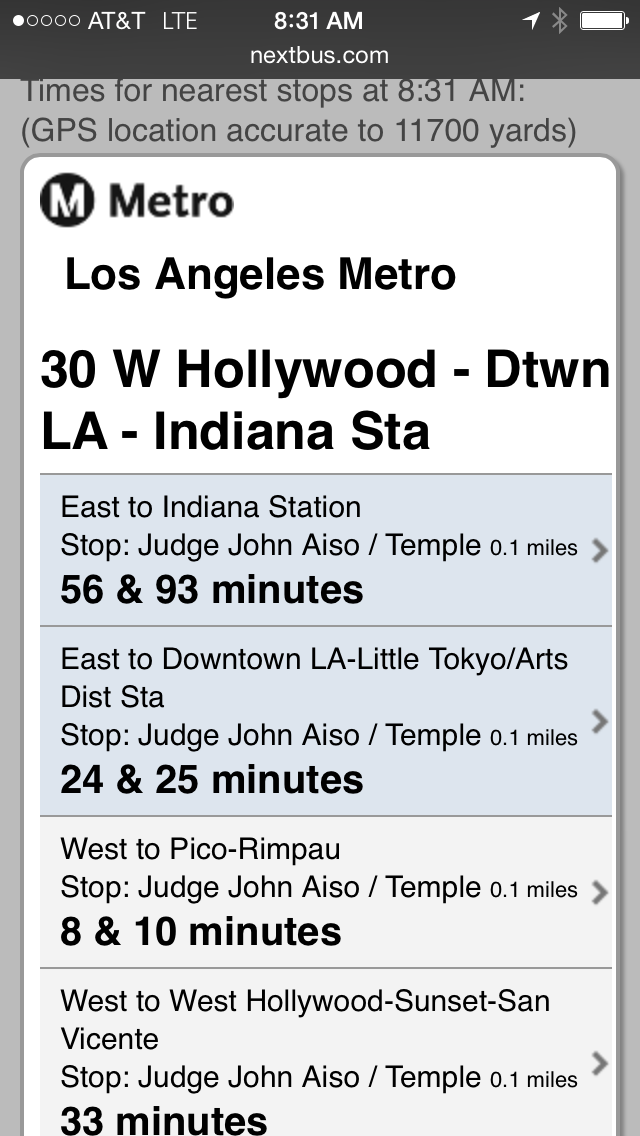 NEXTBUS is an independent arrival app technology. It's at nextbus.com . Nextbus uses the GPS location of your phone to predict when the next bus, or train, will arrive. It has the advantage of redirecting you to another stop or station nearby if that is a better choice.

PROS: Nextbus will give you a menu of several providers that come by your area, you're not limited to one.  It uses the GPS location of your smart device, thus enabling it to display numerous stops or stations in your area which you can use to determine the most efficient bus line or train to take to your destination, not necessarily the one that will stop at the stop you're standing at.

CONS: Is supposed to be accurate to 2000 meters...that's two kilometers...and prediction times are not as accurate as the other two apps listed here. 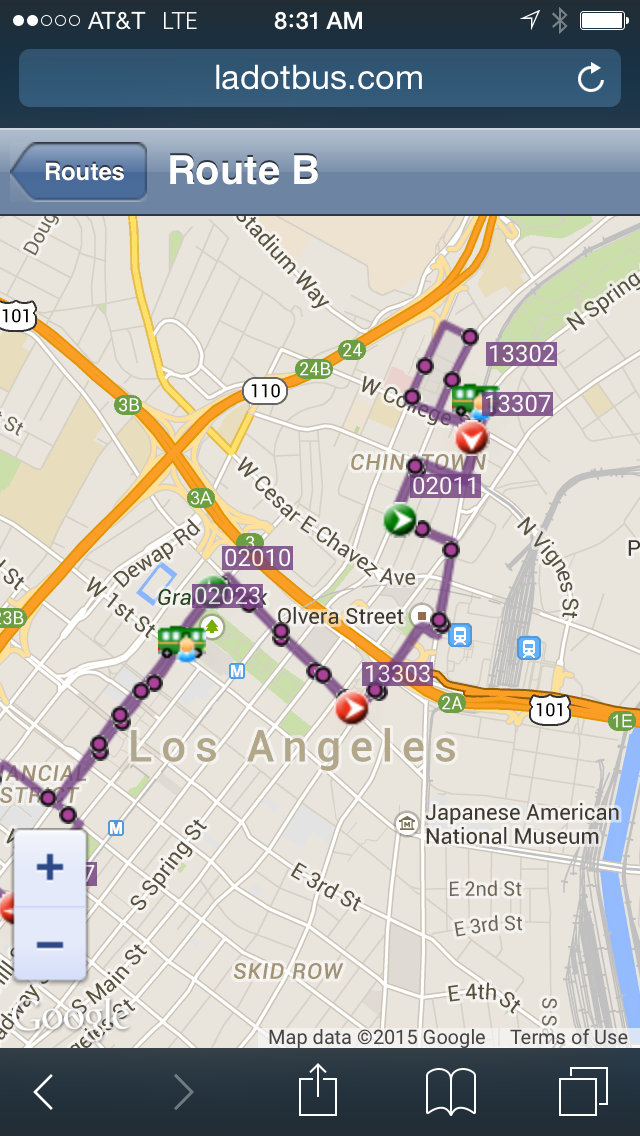 LADOT App is provided by the L.A. Department of Transportation and provides arrival predictions of its buses, most notably the DASH buses used downtown. It has the added feature of having a live map showing you icons of exactly where the buses are at any given moment. Get it at ladotbus.com.

PROS: The maps are very accurate and the bus icons shown on them are a perfect way to see exactly where that bus is.

CONS: Only works with LADOT buses. Sometimes the GPS units in the buses are not working so those buses do not show up on the map.

While I think the LADOT app works the best, the Foothill app is also pretty accurate, while the NEXTBUS app is not quite as accurate but covers more transit providers.

Next time you're waiting for the bus in L.A., be sure to have each of these bookmarked so you know when your ride will be there.

NOTE: We can't always be on the road so this occasional series of posts presents stories of a more general nature, things that happen to us while at home.  Hope you enjoy them...

There's not a lot my son can do. He can't play sports the way he'd like to; play a musical instrument; move out on his own...you get the picture...but there are some things he can. These he develops a passion for such as movies, gaining knowledge on sports, travel, etc.

One thing Tim loves is his music. Hopefully, I've inspired it, but he has great and evolving taste in music. For Christmas or birthday presents, he only has one request. iTune cards.  Along with his noise cancelling headphones, it's a great convenience for those hours long drives or flights to help him pass the time easily.

Tim loves his iPod and he has the largest capacity one ever made at 160GB.  He loves to boast that he's up to whatever this weeks number of songs are...in the thousands...so you can imagine his dismay not too long ago when his beloved iPod would no longer sync with iTunes on his computer or anybody else's.

Not only that, but when he logged onto iTunes, his account was empty.  A blank slate.  Easy you say, just sync the iPod with iTunes and problem solved but iTunes would not recognize the device. The backup and sync icons were grayed out.

A little backstory will come in handy here. One day, a few months ago, Chrome...the Google browser that Tim prefers to use...would no longer work on his laptop. Nothing that anyone at Google or the many offering advice on the Internet could suggest would work.

The last resort was reinstalling Windows 7. The update only install didn't work so we backed up his data and did a complete reinstall.

That fixed the Chrome problem. Unfortunately, now we had the iTunes problem.  Again, nothing we could find would fix it except I was finally able to get our desktop to recognize it and sync the songs on the iPod into iTunes but Tim still could not sync newly bought music back down to the device.

While resetting the device (wiping it clean and starting over, basically) would be the option, the empty iTunes window on Tim's laptop had me scared from trying this option. I didn't want to be on the hook should my son lose thousands of dollars of music, so a trip to the Apple Store and the Genius Bar were in order.

I booked a reservation online at the store in Rancho Cucamonga, a 28 mile drive away. It's only 12 miles to our closest store in Pasadena but we'd have problems parking and it's not free either. An extra 15 minutes would be a small price to pay not to have to deal with the crowded conditions in Pasadena.

We made a day of it. Tim got dropped off to see an early matinee of 'Whiplash' in Claremont. Letty and I had a snack for breakfast and did some clothes shopping. Our plan was to meet up again after the movie, have a quick lunch, then head to our appointment. 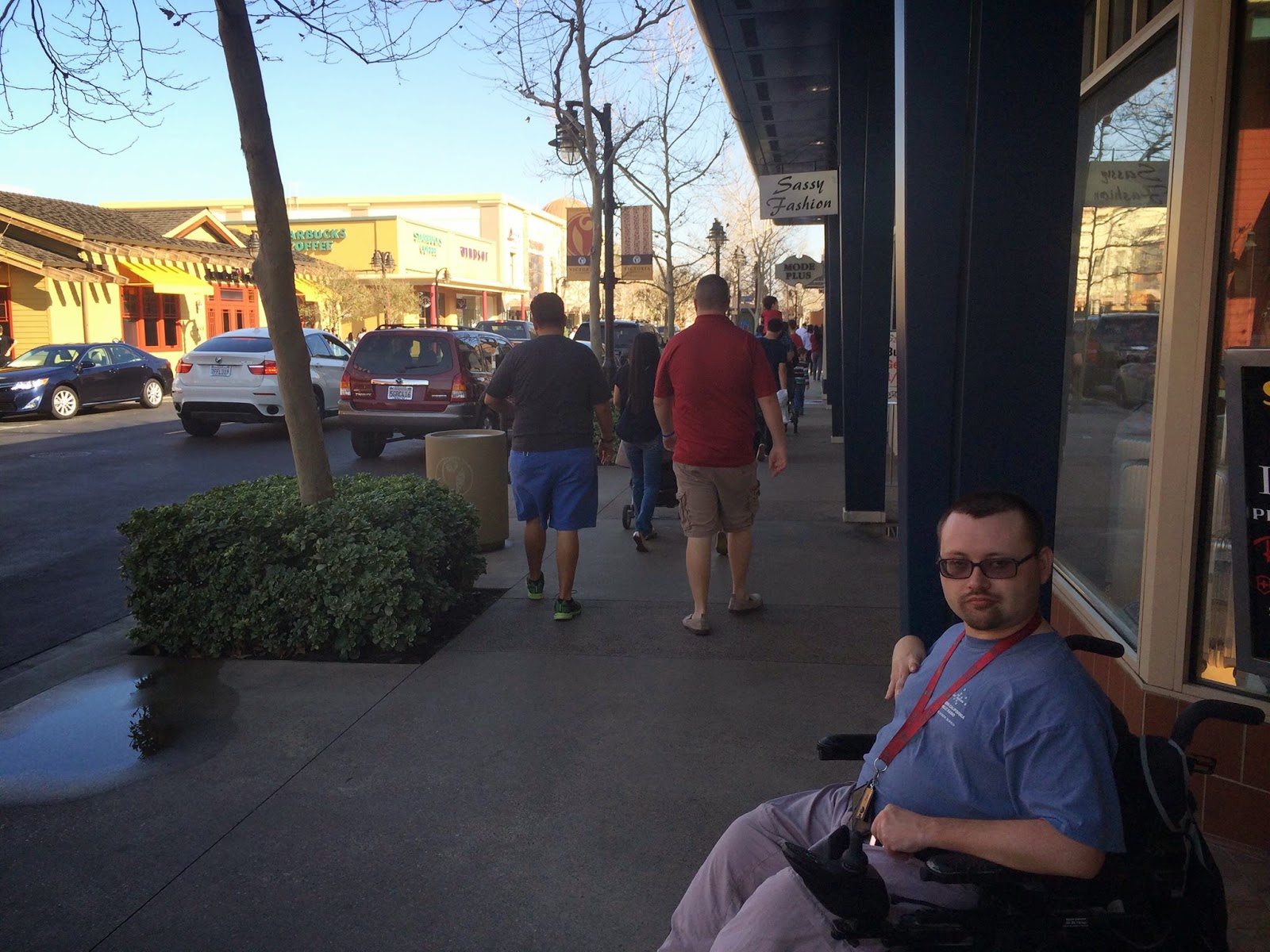 The Apple Store is located in Victoria Gardens, a giant outdoor mall that is so big it has several streets within to drive your car around.  It also has two streets called Main Street (north and south) and, of course, we picked the wrong one to park on. By the time we found the store, we'd whittled down our lunch time to 30 minutes.

The plan was revised to go to the store and see if maybe we could check in early.  No dice.  We are told to come back 10 minutes ahead of our appointment and check in.

The Apple Store site said our visit with the genius should only take 15 minutes so we decided to put lunch off until after our visit.

Coming back at the appointed time and checking in, we're told to wait at a nearby table to be called for the genius. Ten minutes later our name is called and, seeing Tim in the wheelchair, we're told to wait where we are and the genius will come out to us.
I set up Tim's laptop and iPod so we can get right to work.

25 minutes later, we're still waiting for the genius.  When we ask, we're told we're next on the list.  What was going on when they called our name to go up to the bar? Who knows, we're never told.

The same guy that told us to wait at the table for the genius now comes and tells us to head to the bar. What happened to the genius coming out to us? We're told they could help us at the bar better.

I break down our setup,head to the end of the bar (where a foldout platform is deployed for wheelchairs) and set it up again. We tell the genius the problem. She doesn't want to hear it, at least from us. She wants to hear it from Tim.

"What are the symptoms?" she asks.

See, the problem is that Tim relies on his in-home IT specialist (me) to diagnose the technical problems. He can't really describe whats happening because he didn't deal with it.

Finally, I tell her she needs to listen to me because I'm the only one who can describe what's been going on.

OK, it needs a full reset. I make sure to ask that Tim will not lose any of his purchases.  No, he won't but anything he's copied from a CD (about a thousand songs) will be deleted.

Reset commences, genius disappears ("I'll be right back."), and the synching begins.  About 10 minutes later, it appears the sync is complete but we want to make sure the genius looks it over and gives her OK but she's nowhere to be found. Out of the 25 or so employees just standing around the sales floor, she isn't one of them. Eventually, we ask what happened to our genius and someone goes to look for her.

She was out back smoking a cigarette. Finally, she give her OK and our hour and a half at the Genius Bar is over.  What an ordeal.

Stomachs rumbling, we finally head over to a nearby Fuddruckers to have a giant hamburger to quell our hunger.

Remind me why it is everybody is so crazy over Apple products again...

Darryl
Copyright 2015 - Darryl Musick
All Rights Reserved
Posted by D. Musick at 4:30 AM No comments: 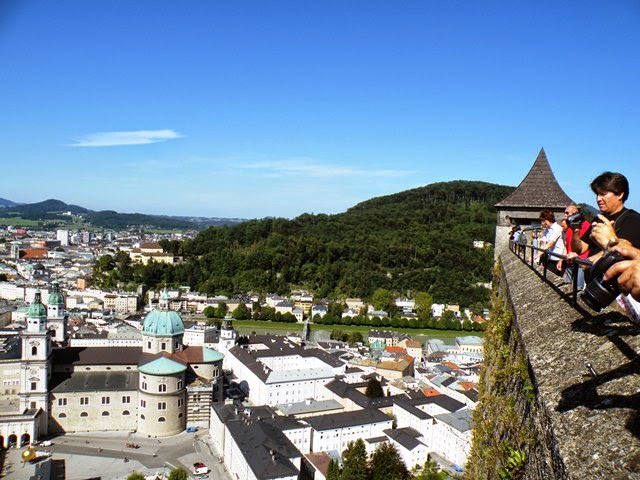 Our ratings are...
Fully Accessible - You can access all of the attraction, with no problem, in any type of wheelchair.

Mostly Accessible - You can access most of the attraction, and all of the important parts of it, with your wheelchair.

Partially Accessible - You can access a good deal of the attraction but some parts are inaccessible and some important parts you'll miss.

Inaccessible - Kind of speaks for itself, avoid if you're in a wheelchair.

Haupbahnhof - Fully Accessible. The town's train station is where you'll be deposited after a 75 minute train ride from Munich. The buses out front are accessible via the back door (good luck with getting the driver to help you) but be aware that everything you'll want to see is also within easy walking distance to the station. 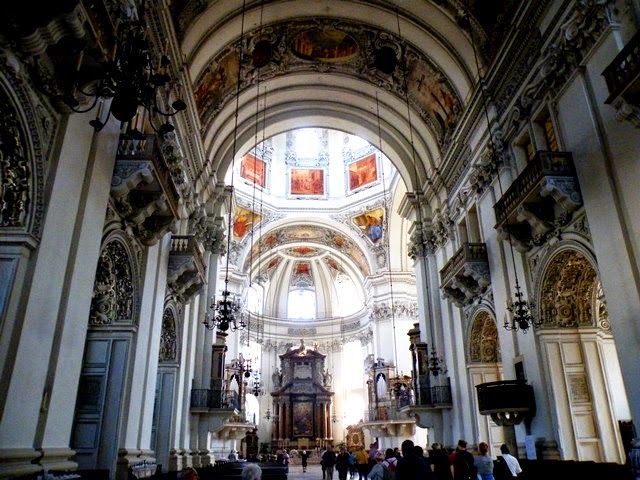 Cathedral - Mostly Accessible. The church where Mozart was baptized and plied his trade as an organist is easily seen via a chair but restrooms will have to be found elsewhere. 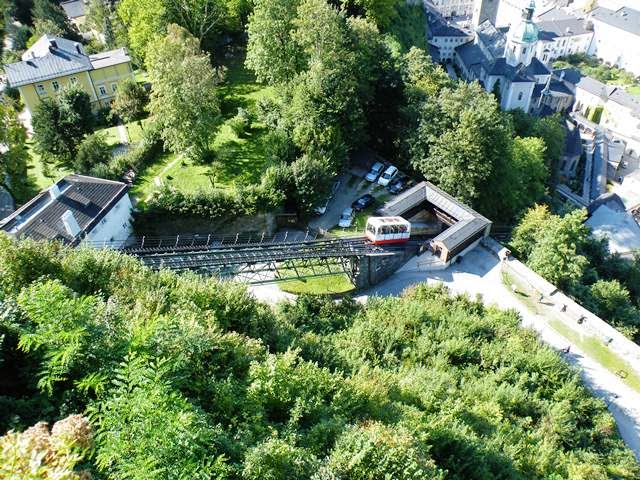 Hohensalzburg - Partially Accessible. Looming on the hilltop, protecting the town, this giant castle is reached via a funicular. The train is accessible via a separate path, follow the ticket taker's directions, and a lift to the train platform. Security guards here are not known for their warmth, let them push the elevator buttons for you. At the top, only the outer perimeter (which includes the restaurant) is accessible to wheelchairs. 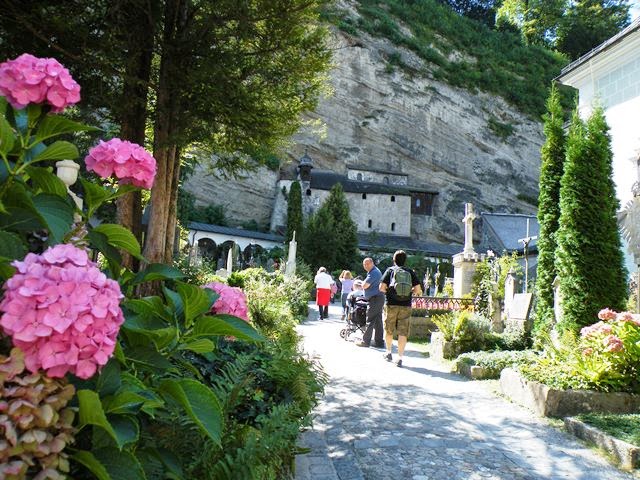 St. Peter's Cemetery - Mostly Accessible. The supposed hiding place for the Von Trapp family from the movie 'The Sound of Music' does hold some famous remains, such as Mozart's sister. 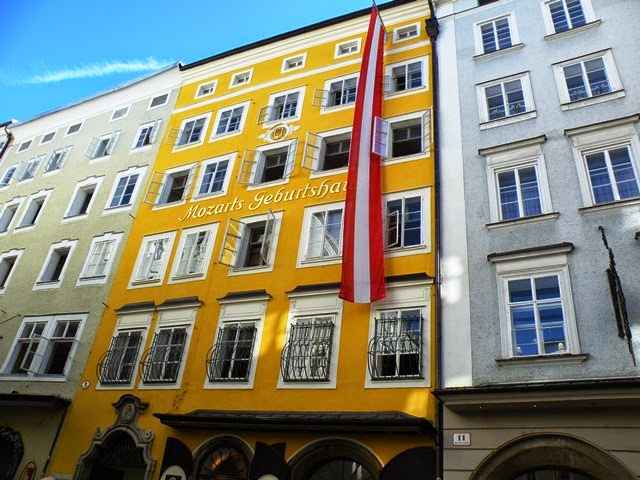 Mozart Family Residence - Fully Accessible. The Mozart family home on the other side of the river from his birthplace is a very nice museum that chair users can take advantage of.

Darryl
Copyright 2015 - Darryl Musick
All Rights Reserved
Posted by D. Musick at 4:30 AM No comments: