Some days, I have more ideas in my head than I have time to write. Today is not one of those days. Writer's block is no fun when you've dedicated to writing a new story or two each week.

So what do I write about? How about not being able to?

It's Wednesday, so I'd usually have one of our in-between stories...travel tips, adventures close to home, or other non-travelogue features that fit in the middle of a travel story.

Maybe I can do an a accessible attractions story but by now I don't have time to go through my notes, pictures, and research to come up with one (yes, it takes me more than a few minutes to whip one of those up). Same with a transit report.

Travel tip? Don't become a travel blogger.  Kidding...it's great, when you can think of something to write.

So this will be my adventure, close to home, of not being able to come up with anything new today.

What could I talk about? We have a ho-hum day trip up the coast the other day. Maybe I'll write about that but it wasn't the most dynamic day out we've had at The World on Wheels. It'll take a lot more digging to get some nuggets out of that one.  Maybe in the near future.

How our favorite baseball team is imploding and not making us want to go to a game? Maybe on Tim's Sports Blog...not here, not today. 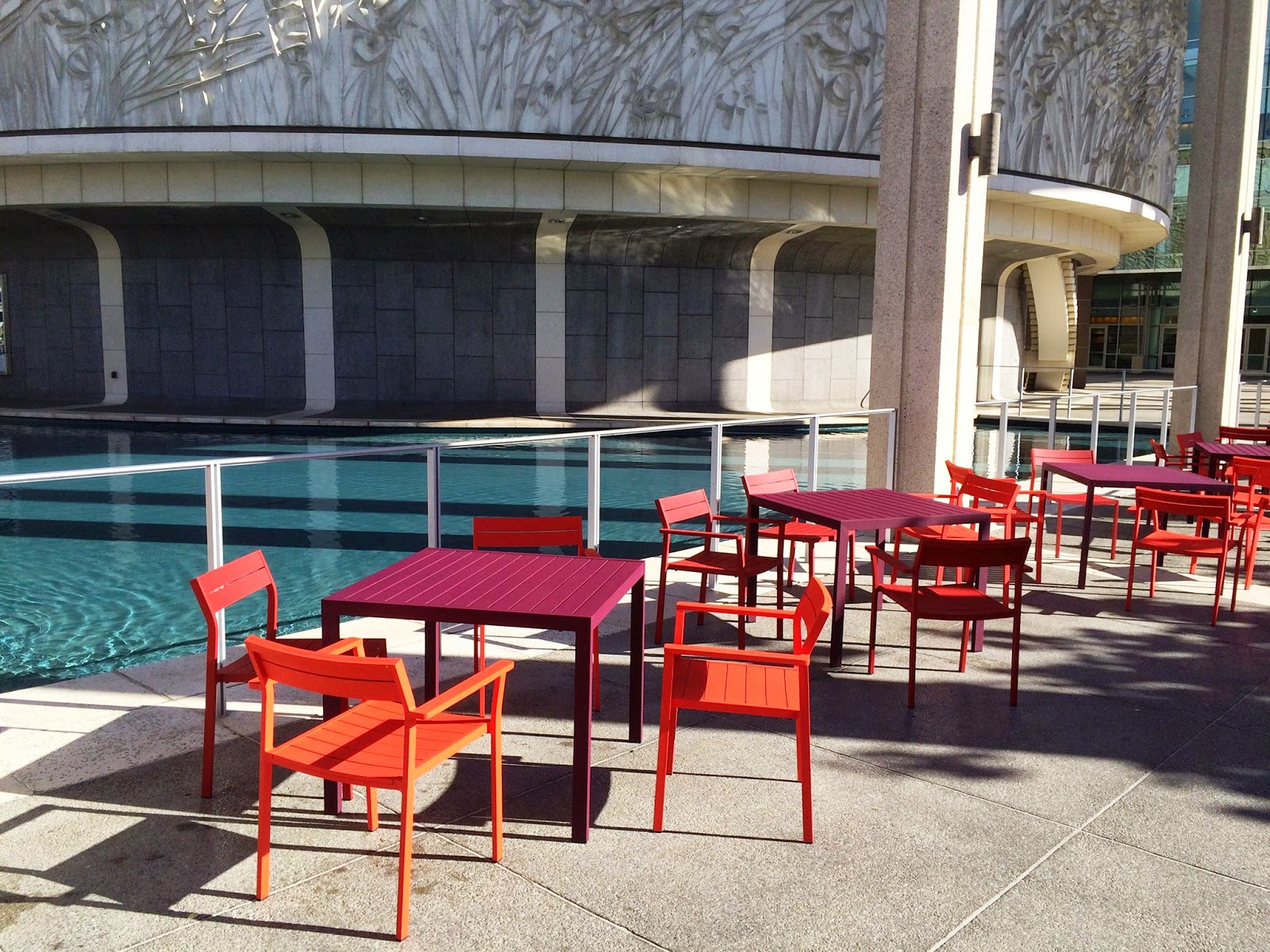 I go for a walk every day.  Maybe I can get something out of that.  There, here's a picture from a recent walk in downtown Los Angeles but I'll have to spend more time to get a whole story out of that.

Nope, I just don't have a story in me today...you'll just have to do with this.

Darryl
Copyright 2015 - Darryl Musick
All Rights Reserved
Posted by D. Musick at 7:40 PM No comments: Links to this post 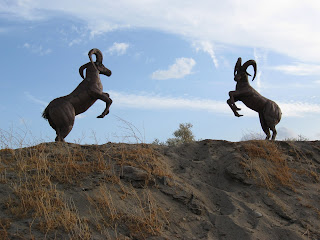 Borregos Against the Setting Sun


While Tim and I are writing, editing, and polishing up our newest report, let's revisit the beautiful and remote Anza Borrego State Park with side trips to Julian and the Salton Sea...

Two to three hours outside of Los Angeles, depending on your route, is the desert of Anza Borrego. We opt for the northern route of driving by Palm Springs, turning south at the Salton Sea, and then back west into Anza Borrego Desert State Park and the town of Borrego Springs.

We drive over to the unique underground visitor’s center, but find that it is closed. We arrive on a Wednesday but it’s only open Thursday through Sunday. I suppose the state’s massive budget cuts might have something to do with that. The accessible restrooms are open, though, and are welcome after the long drive. 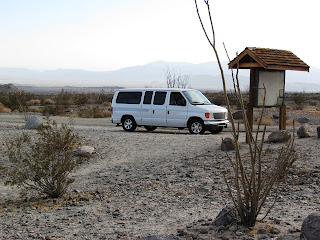 We shoot a little video around the re-created oasis in front of the center with its pond full of endangered desert pupfish, which look like overweight minnows. I’d like to take Tim to one of the many natural oases in the park, but none are accessible by road unless you have a high-clearance four wheel drive vehicle and those that are hikable do not have wheelchair accessible trails. The man-made one will have to do.

It’s lunch time so we have some pizza at Calico Pizza, located in the small shopping mall in the heart of Borrego Springs before heading over to our room at Borrego Springs Resort.


About six years ago, we had stayed here before and ended up on the resort’s mailing list. I decided to take advantage of one of those many deals sent over and ended up with a sunrise view two-room suite. Minimally accessible, it is step-free and has a tub that can be managed with a bath chair. The resort also has roll-in showers and ADA compliant rooms, but no suites. We were offered a switch to a more accessible room, but we wanted a suite and it worked for us.

The suite consists of a large living room, with a queen size sofa bed; a patio with a table and two chairs; a small efficiency with a sink, microwave, coffee maker, and refrigerator (the suites also used to have a two-burner stove but those have been removed although the vent hood is still in place); a good size bathroom; and a bedroom with king-size bed, his and her closets, and bathrobes. There are also two large LCD TVs, one in each room. Tim has especially good things to say about the large channel selection, including many HD channels.

After unpacking, it’s dinner time. The sun has gone down, and the area is pretty much pitch-black. It’s because of this lack of light that the area is an astronomer’s delight. Just off of the towns one concession to traffic management…a traffic circle name Christmas Circle…stands the little French Corner bistro and antique shop.

The owner, Yves, welcomes us and seats us at a nice table inside. Yves is from Nimes, one of my favorite towns in France, and we chat about the area’s Roman ruins. The house wine is a pinot noir from that region, and is only $10 for a half-liter, so we get that and start with a delicious broccoli and bleu cheese soup. Dinner would be steak frittes for Time, flammande carbonade (a Flemish beef stew) for me, and a seafood crepe dish for my wife. The food was good, but not exceptional like you would expect from a French restaurant. If I were to recommend someone to go here, I’d say get the wine, the soup de jour, and a sweet crepe for dessert. If you want more, maybe their quiche of the day, which looked quite good.

After bedding down for the night, we discover one slightly bizarre aspect of our room. The comforter on our bed…down-filled…is a good 6 inches thick and around 40 pounds! It’s like sleeping under a weight. I kick it off and use a sheet, I don’t know why such a thick blanket needs to be used in the desert. Alaska maybe; Borrego Springs, no. 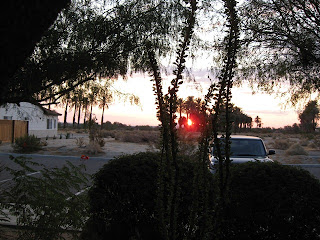 In the morning, it’s a 28 mile drive up the mountains to Julian, a former mining and current apple farming town. We head to the Julian Café, which comes highly recommended, only to find out it is not wheelchair accessible. In fact, along Julian’s Main Street, most of the buildings on the north side of the street lack basic accessibility (the buildings date back over 100 years), but on the south side, it is much more accommodating.

Instead, we eat at the Julian Coffee House across the street and down the block. Breakfast is good. I share a bagel, egg and sausage sandwich with Tim and an order of pancakes with my wife. Afterward, we head to the Birdwatcher, Julian’s rather large birder supply store because my wife is a big bird watcher. While she browses inside, Tim and I sit on the bench outside and watch all the birds come to the store’s feeders. We see an Anna’s hummingbird, Mountain bluebirds, Lesser goldfinches, and many ravens and sparrows.

Next, it is over to the Julian Cider Mill across the way to watch fresh apples ground into cider and have a few samples. Then shopping at the various knick knack stores and, when we reach the end of the street, see the hundreds of cats rounded up for a spay and neuter clinic taking place at the town hall that day.

Before leaving, we head to Mom’s pie shop…one of Julian’s many pie bakeries…to have a slice of pumpkin and another of bumbleberry pie. 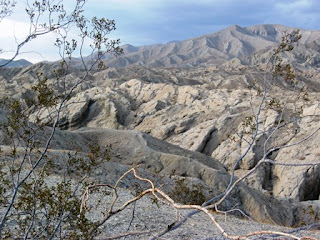 Back in Borrego, we do some shopping before spending a couple of hours relaxing at the hotel. Dinner is at a local institution, Carlee’s, more a bar than restaurant. It’s a friendly little watering hole with some very good food. Tim and I love the burgers at Carlee’s, so we get two Borrego Burgers (bacon cheeseburgers) accompanied by their outstanding beer-battered fries while my wife gets an equally good pasta primavera. Here is where you find the friendly locals, waiting for Karaoke to begin while dining and drinking. Even though it’s mostly a bar, kids are welcome at Carlee’s. 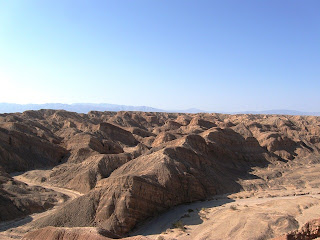 That night, we drive to a secluded spot by the hotel to stargaze. When we turn off the headlights, it is completely dark. Kind of unsettling, being out in the middle of nowhere, unable to see the hand in front of your face; but the stars in the sky are brilliant here. With no moon in the sky, the view is unfettered. Jupiter is bright; satellites and meteors streak across the heavens. 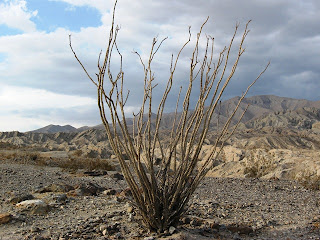 In the morning we lounge around the room before heading into town. There’s a farmers market going on in Christmas Circle…which doubles as the town plaza and park…where we pick up some fruit and a euphorbia bush to take home. Dinner was so good at Carlee’s that we decide to have lunch there today, opting for French dips with their homemade potato chips. 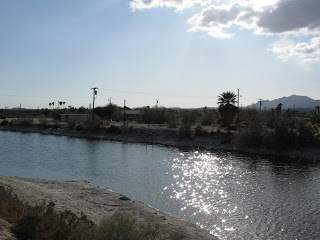 At the Salton Sea

After lunch we head to the Salton Sea and the Salton Sea Beach Marina. This area is depressing, fascinating, exhilarating, and…at times…beautiful. It’s obvious that this one-time resort area has seen much better days. Ruins of dream homes dot the shore, the marina businesses are barely hanging on, and the earth is sun-scorched here. At the same time, new construction of homes in the area suggest the dream hasn’t completely died and the sea…a man-made mistake of epic proportions…attracts millions of migratory birds. 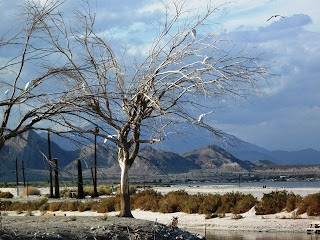 We drive right to the edge of the water and spot egrets, great blue herons, stilts, gulls, and a lone osprey watching it all while contemplating his next meal.

Leaving town, we stop at the Torres Martinez travel center on highway 86 on the Torres Martinez Indian Reservation. Along with cheap gas, a small casino invites us in to play penny slots. Tim plays for an hour on the two dollars he put in his machine. His mom and I are not far behind as we imbibe on the two dollar margaritas and pina coladas brought out by the servers.

That night, we enjoy some drinks at the hotel’s bar before eating an outstanding prime rib dinner in the Arches restaurant, located on-site. Being Friday, it’s the day’s special at only $10.95 for the dinner.

After checking out, we are heading home but want to stop in Coachella for a taco place that we’d been to years ago and enjoyed quite a bit. The Jalisco taqueria is not at all as good as I remember, but around the corner we stumble upon the Coachella Valley Fiesta de Chilies. Yes, I know the spelling is not correct, but that’s the way it was.

A nice little community festival was set up in the park behind city hall, with food booths (I wish I’d know about this before the tacos), beer garden, rides for the kids, and live entertainment on the stage. The star attraction was the chili cookoff. Eight booths we setup by local restaurants, police & fire departments, and individual cooks. Five dollars got you a bowl, a spoon, napkins, and 10 tickets. Each ticket was good for a sample at one of the booths. With eight, the remaining two were for your favorites. Whoever collected the most tickets wins the people’s choice award. There was also a panel of judges tasting for their own reward. 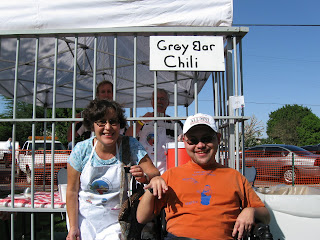 While almost all of the chilis were good (the one sponsored by a local Indian casino was mediocre), the three of us thought that the police department’s chili was best, followed by a mild turkey base chili, and a pork based chili prepared by a local barbecue joint.

And with that, the trip ended as we drove the rest of the way home.

All Rights Reserved
Posted by D. Musick at 4:30 AM 4 comments: Links to this post