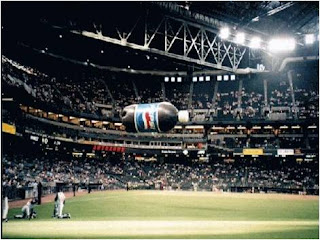 Chase Field in Phoenix is currently home to the Arizona Diamondbacks. The team won a World Series three years after becoming a team in 2001 and gave us such stars as Randy Johnson and Curt Schilling. By 2004, however, the good times were over and the team lost 111 games. Then, former Tiger and one of the all-time Dodger heroes, Kirk Gibson took over as manager and led the team to the playoffs last year.


Their fortunes are blooming now...in June, 2013..they are 2 games ahead of the world champions San Francisco Giants in first place.

Chase…formerly known at Bank One Ballpark - or the BOB…has a retractable roof and air conditioning to shade spectators from the brutal Arizona summer heat. This was the first U.S. baseball stadium to be built with one. Toronto was the actual first, but it’s in Canada, and Montreal’s stadium also had a retractable roof but never worked right. Even with a roof, the Snakes play on real grass, a special hybrid that doesn’t need as much sunlight to grow. The roof is kept open as much as possible for the health of the turf.

Here are the stats:


From a distance, the stadium looks like a hangar at the airport, especially if the roof is closed. For night games, if the temperature outside is comfortable, the roof is opened just before the game giving fans a starlight view. Due to being mostly indoors, there is much echo noise here. 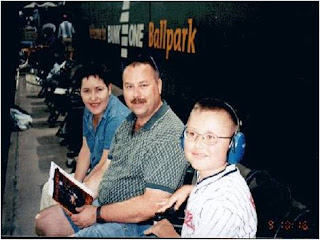 Wheelchair seating is plentiful and evenly distributed in all levels except the Dugout Club. We went to a nearly sold-out game and were provided seats in the front row in right field next to the visitor’s bullpen. Only a chain link fence separated us from the coaches and pitchers warming up and it was easy to get a few autographs. Another chain link fence in front of us was the only thing keeping us off of right field.

Ticket are priced dynamically and run anywhere from $9 to $150. Call (602) 514-8400 for accessible tickets. The team also maintains an extensive Guide for Guests with Disabilities on its website.

Some of the signature features of this stadium are the keyhole…a strip of dirt leading from the pitching mound to home plate, and the swimming pool in right field. Up to 42 guests can rent this out on a per-game basis for $3500 - $4,500 (it is sold out for 2013 but deposits are being taken for 2014). The pool also features a pool lift for disabled guests and an accessible locker room with roll-in shower (notice the lift at the far end of the pool in the picture above).

Food is good here but expensive. Tacos were available when we were there and were the lowest price option. The Mexican food is pretty darn good here. Other food options, beyond the usual ballpark fare, include sushi, barbecue, and comfort food like meatloaf and mac ‘n cheese. You may want to go to Alice Cooper’s adjacent restaurant, Cooperstown, before the game for some pre-game, lower priced specials. Try the Big Unit hot dog if you’re hungry. Come back afterward for the concert…your game ticket stub gets you in free.

There are plenty of parking lots next to the stadium and light rail goes right to it.

Not a bad place to see a game at all, check it out next time you’re in the Valley of the Sun.