Crashing the Party - A Light Rail Tour of Houston 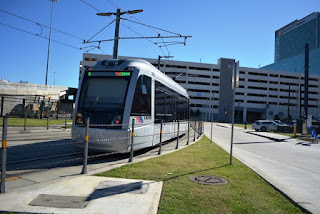 Our downtown hotel, Homewood Suites, is not only a great hotel. It's in a great location, too, with Houston's light rail running on either side of the building. This makes for a great, easy way to go out and see the city.


Across from the hotel is a parking lot and on the other side of that is the train station.  It's a bit confusing paying the fare at first...day passes have to be validated but one trip tickets don't...and we start off with a little bickering about how it works on transfers but we take a deep breath and move on, determined to have a good time.

The trains run often here at about 6 to 7 minute intervals.  It's a quick ride to where we have to transfer. Looking back, we probably could have walked those three blocks just as quickly.

The Red Line runs down Main Street in downtown Houston before heading out to Rice University, the Ensemble District, and the massive hospital district before reaching our destination of Stadium Park. 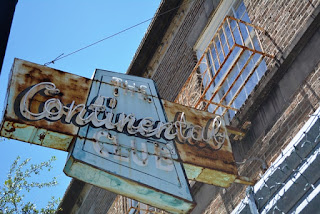 Along the way, we take note of other stops we might want to make on the way back but, first, we go to see some sports history. 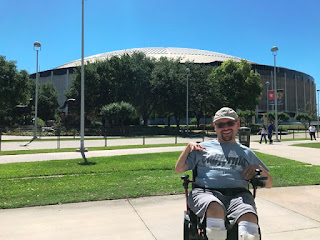 At Stadium Park sits the massive, new NRG Stadium, home to the NFL's Houston Texans. It's a rather sterile behemoth, as generic as the team's name but next door sits a landmark of an old stadium that harks back to the nostalgic days when the city had a much better name for it's team, the aptly named Houston Oilers. Along with baseball's Astros, they called this stadium...the Astrodome...home.

Completed in 1965, the Astrodome was the world's first multi-purpose, domed stadium. While now pretty common place in locales where weather would affect gameplay, this was revolutionary when it opened. One thing they didn't take into account, however, was that the natural grass playing surface would not survive indoors.  A synthetic grass was developed and installed and Astroturf became a household word.

There are a lot of people getting off at this station and the parking lot is full even though nothing is in season here. We walk towards the dome and find the area fenced off. A gate with two attendants and a table block our way. They are checking everybody's packages...I should mention everybody is very well dressed, too.

Obviously, some event is taking place and the entire area is cordoned off for it.

I explain to the people manning the table that we just wanted to take a look at the old dome and if they could show me a way to get over to it. They said to just let us check your purses and backpacks and you can go in. 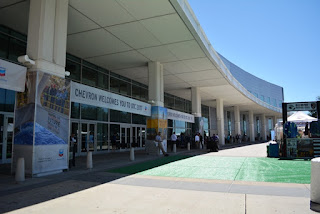 Security check over, we end up wandering into the Offshore Technology Conference, a convention for oil people from all over the world to explore the wonders of offshore oil drilling.

As we make our way over to the old stadium, we pass by oil rigs, pumps, and even industrial air conditioners along the way. There's a food-truck court (where we get a five dollar bottle of water to quench our thirst) and candy samples along the way from all of the oil industry vendors.

There are Saudi men in smart suits and turbans. Nigerian oil execs in very sharp looking Nehru suits; South Americans in sharply pressed suits and very stylish dresses; and Oklahoma oilmen in their dress jeans, Pendletons, and custom cowboy boots all classed up the place. Then, there is a family of three bloggers dressed in shorts, t-shirts, sandals, and baseball caps.

While it was obvious who did not belong at this gathering, the people there were still very nice and courteous to us.

We make our way through, a bit amazed at all the technology available in the industry and we're only on the outside. Who knows what amazing pieces of machinery and technology await in the main exhibit hall?

On the other end of the lot, we find ourselves on a small street with the old Astrodome on our left and it's replacement...NRG Stadium...on the right.  The new stadium dwarfs the old, which is not a small feat.

The old place looks a little worn, a dowdy old woman next to the sparkly new girlfriend. It's been declared unsafe so from the outside is all we can see. It could use a cleaning and a coat of paint.

I'm sure inside there's much to be done, too. It's now a landmark and no demolition is scheduled. One day, it can be reconditioned and served as another venue to this rather large event center...maybe a concert hall or even a sports arena for local college teams. 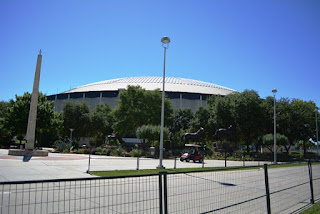 Now, it just sits in the Texas sun waiting for another turn in the spotlight while we make our way back out via the convention's food court. A lady offers us a sample of Brazilian steak from a food truck. It is very good.

After an hour or so of this Texas hospitality, we're on our way out when a security guard approaches us and asks what we're doing. We tell him and then say we're just trying to find our way out again. He scolds us for being there and says "no pictures" after we'd already been there an hour and other security guards said nothing...not even when we took their pictures.

I figure he's just not on the same page as the others, who were gracious and hospitable to us, and we leave. 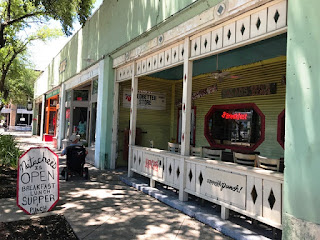 On the way back, we stop at the Ensemble District, which looked like a nice, walkable area on our way to the stadium. It is but it's also more of a nighttime area and nothing much is happening. We do find an old looking southern restaurant called Natachee's open for lunch so we amble on in. 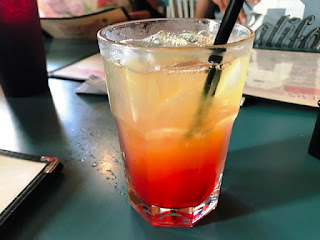 It's a rustic looking room with a wooden porch out front and a picnic area to the side. Looks like a southern grandma's house. Inside, we take a seat and order. I have on of their signature punches (very tasty adult versions here but they have non-alcoholic punches for kids, too) and some ice cream. Tim has the pulled pork and Letty has the day's special, chicken rosa. 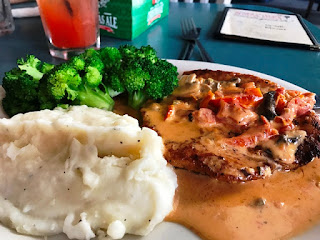 Letty is blown away by her dish. A very tasty battered chicken covered with a pink sauce and Tim is liking his sandwich, too. Unfortunately, I was still full from breakfast so it was just the punch and ice cream for me, which was still very good. 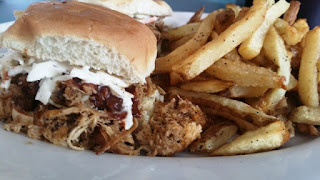 We walk around for a bit more then hop the train back to downtown. 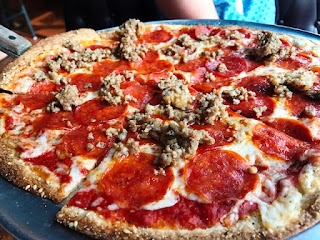 A little window shopping and more walking take us up to dinner time where we decide that the happy hour at Bombay Pizza, a combo Indian and pizza joint, where we had some great pizza and beer for dinner. 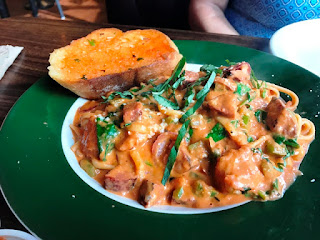 Letty has the shrimp and sausage pasta.

Bellies sated, steps achieved, it's time to go back to the hotel and get ready for this city's baseball game. We'll get to that in the next report.