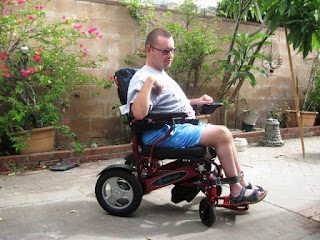 UPDATE ON THE POWER CHAIR FROM DARRYL - NOVEMBER 2017:

Well, it's no secret that the power chair from GeoCruiser came out of the gate underwhelmingly. As you can see from the story below, the chair actually started falling apart while we were in Germany (necessitating a visit to the Berlin version of Home Depot to find wrenches and parts for an 'on the fly' repair) and went so frustratingly slow that I ended up pushing it in manual mode for most of the trip.

While that was good for exercise and weight loss on the trip, it was also very frustrating and was making me rethink what I thought was a good idea to buy this light-weight fold-able power chair for traveling.

The chair comes with a one-year warranty so off to San Jose it went, via UPS, for the company to make it right.  It came back within a month.

Fast forward to May when we went to Texas and the Florida Keys. While at first the chair seemed a bit better, as the time went on, it went right back to just crawling after about five minutes of operation.

At least this time, it wasn't falling to pieces on us.

Phone calls for help were made to GeoCruiser's dealer in San Jose, who walked me through various tips to try to improve the speed of the chair. Among the advice was to turn the batteries over and, when I told them one of the batteries wouldn't lock into place, to push it in very forcefully.

Nothing worked so off the chair went to San Jose (this is where I found out that the one year warranty only covered shipping back for the first two months - I had to pay shipping back this time since it was the 11th month).

I got an e-mail saying that they might not cover it since one of the battery connectors was smashed, the same one they told me to push in "forcefully." Several e-mails, with increasing anger, back and forth convinced them that it was their tech support that told me to mash in the battery as hard as I could.

When the manager sent back an e-mail complaining that they had to spend over $1,000 for parts to fix the chair, I basically lost it with them and reminded them that I had paid far more than that for a chair that was basically useless and that their contract with me gave me 12 months to force them to make it right...I really didn't care if they were losing money on this since the chair was a lemon from the get-go.

A week later the chair returned. Tim and I took it out for a long walk.  It worked and went much faster this time and was working very well. We decided to roll the dice and take it with us to Canada for a two week trip. I was knowing that I'd be doing a lot of pushing...in the mountains...if this happened again.

To make a long story short, the chair performed brilliantly with absolutely no problems. I just wish it had been that way from the beginning...it would have been nice not to push this chair to the heart of Europe and southern Florida.

Now, finally, the chair is worth it.  If you do decide to buy a chair like this, make sure it really works as promised as soon as it's delivered...and hold the vendor's feet to the fire if there is anything at all you're not happy with.

Our most recent European traveling adventure to Germany and the Czech Republic was special enough that it is worthy of not just one, but two...YES TWO...Cerebral Palsy Stories.  The first Cerebral Palsy Story from our time in Europe was about the basic fundamentals of using an aisle chair while boarding and getting off an airplane.

The second Cerebral Palsy Story from our time in Europe comes courtesy of a new traveling power wheelchair we bought from a company called GEO Cruiser up north in San Jose, California.  When we were looking at the different models they offered, we opted to go with the elite model in the Geo Cruiser line of power wheelchairs for a cost of about $2,500.  Considering that there are only two models of the wheelchair offered, the choice of models wasn't very hard for us in terms of the number of models offered.  We just had to make what we felt was the best decision for us in terms of which model of the chair we thought would give us the best bang for our buck.

We also wanted to get me a new power wheelchair for traveling purposes so that I could have some independence while seeing the sights in Europe by driving myself around and not having to rely on my parents to push me around all the time to wherever we went. 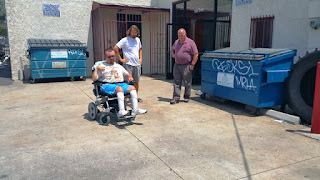 There are a couple of different electric chairs to choose from. To their credit, when we called Geo Cruiser, they suggested we also look at their competitor's chair before buying. This was the EZ Cruiser wheelchair. 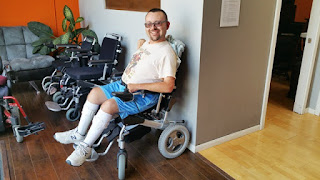 EZ Cruiser's warehouse is located in Van Nuys, California and Geo Cruiser is in San Jose. We were heading up to Northern California so we decided to visit both locations in person to test drive the chairs. 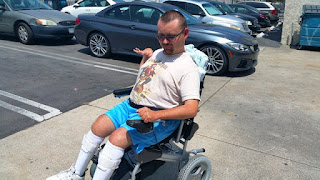 EZ Cruiser seems like a well-built chair and has a nice turning radius and a good warranty.
The problem with it is that the back is at a too-severe angle and it feels like I'm reclining.

Geo Cruiser is more comfortable to sit in but takes a little getting used to with it's wider turning radius and slower speed. The warranty is good but not as good as EZ Cruiser's. 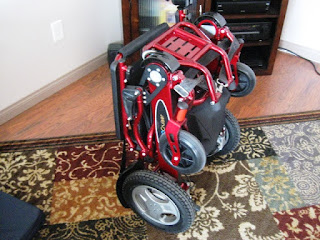 The price for both chairs is almost the same and both weigh around 60 pounds, including lithium batteries. They both fold up to easily fit in a regular sized car trunk, although the Geo Cruiser folds up just a little smaller than the EZ Cruiser.

As I mentioned above, we chose to go with the elite model of the Geo Cruiser when purchasing a new traveling power wheelchair a few months before we left for Germany mainly because it's a more comfortable chair to sit in.  As with most of our other purchases, we had the wheelchair delivered to our house similar what one would have delivered to them from an Amazon.com purchase. 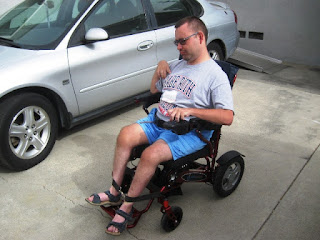 During the time after the new chair was delivered, my family and I took full advantage of the time we had left before our trip so that I could practice driving it around and get more comfortable with it.

Those weekly driving tests consisted of driving it to and from our backyard and back inside the house.  From what I can remember, the only negatives we discovered from these pre-traveling weekly driving tests was that the new chair didn't have quite as nice of turning radius for tight and sharp corners compared to my regular power wheelchair and that it wasn't as fast.  We even got in touch with the company again before we left to ask how we could adjust the speed and they walked us through the steps on how to make it go faster.

Fast forwarding to the week when we leave for our trip, I can already feel a difference while driving it around the airport before our first flight leaves in terms of feeling better about how to use it when navigating it around tricky turns and sharp corners, so I can't say that the weekly driving tests I did before we left didn't help because they did in terms of making me feel more confident and comfortable about my skill level when driving it.

What my family and I didn't find out until the trip was in full swing were are the cons of the wheelchair that weren't present before we left.  For instance, when I had my chair at its top speed at times, it would suddenly decide to start slowing down for whatever reason even though I hadn't turned it down to a slower speed in the first place.  When this happened, I kept having to remind my parents to slow down their walking pace just so I could keep up with them.  When that didn't work, I had to have my dad put the chair in manual mode and push it so we could get to where we were going faster. 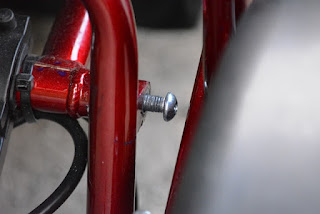 Then there were times when some of the screws and bolts on the chair would come loose from going over the lovely cobblestone sidewalks and streets that Europe is famous for.  To manage this obstacle we ended having to go to a hardware store near our hotel as well as borrowing a wrench from the helpful staff at the hotel's front desk to tighten the loose screws and bolts.  This became a nightly ritual during our time there.  So much so that one night, the lady at the hotel's front desk already had the wrench in her hand when we returned from our sight seeing one night and said that we could give it back before we had to leave.  The good thing about that is we didn't have to hold on to it and give it back since we went to a nearby hardware store and got the necessary repair supplies.

One final downside that the chair presented during our trip was a problem with one of the chair's motors that was making it even more difficult to use because it went even slower during these times and it was also making an unpleasant grinding noise in the motor while driving it.  At this point, I was already having enough of a hard time trying to keep the chair on the right side of the sidewalk to avoid any oncoming pedestrians and bicycles that it was getting really frustrating for both my parents and myself that more often than not, we had to put the chair in manual to save us from even more headaches.

About the only silver lining we found for easier navigation of the chair for future trips came at the end when we discovered by accident a little trick where we would put the right motor on manual while driving the chair and somehow this seemed to improve the overall performance of the chair and it also seemed to go a little bit faster once we discovered this trick.  It's too bad that it took us until the trip was over to find this out for ourselves since it would have made things a lot easier for all of us in the beginning.

Since the chair is under warranty, we shipped it back to Geo Cruiser to repair the problems that we had with it. The company took about a week to make repairs and ship it back to us. We will see if the problems we encountered are fixed.

Tim Musick
Copyright 2016
All Rights Reserved.
Posted by Timmy Wheels at 4:30 AM