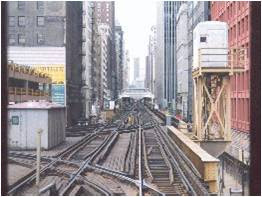 The Loop as seen from the El

Previously, the hotel didn't want to honor our breakfast deal, it snowed during Spring Break, and Frank Lloyd Wright designed some amazing buildings...

Tuesday morning: ah, the luxury of a big, freshly cooked breakfast in the lobby of our own hotel. Delicious! No, really, it was...

Outside, it’s sunny but bitterly cold and windy. After lounging around a bit in the morning, we take the red line subway to Wrigley Field which has an accessible station nearby. Maybe 3,000 people are at the afternoon game today. We find our accessible seats which is just where a couple of seats have been ripped out of the top row to accommodate a wheelchair. 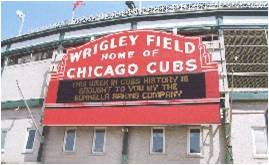 Since the game is so sparsely attended, we kinda feel like we’re in Siberia by ourselves up at the top. The windy cold makes it physically feel like Siberia. Think I’m exaggerating? Here’s the hard facts: ambient temperature is 26 degrees. Wind chill factor is 16 degrees.

After making several trips to the snack bar for coffee (forget the beer today!) and buying expensive souvenir blankets at the gift shop, we soldier on for four innings before Tim finally admits it’s just too darn cold and we retire back to the hotel for some much needed warmth.

That evening, we take our dinner at the Frontera Grill, a trendy little Mexican restaurant run by Rick Bayless who has a cooking show on PBS. It is very good but be prepared to wait. There are no reservations and the line was 2 hours long when we left.

We spent the rest of the evening in the hotel just sitting in our warm rooms watching tv. The next morning, it’s off to our lakefront day.

We can see the Field Museum from our window so we decide to walk. It’s a lot farther than it looks. Here, we come to see Sue the T-Rex. Sue is the largest and most complete T-Rex skeleton ever found. 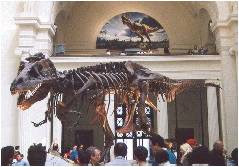 The front of the museum is not accessible. The signs point to a side entrance next to the loading dock. Inside, we find that the basic admission, usually $8, is free this week....I’m imagining because it’s spring break and all the kids need somewhere to go.

That sounds good in theory, but in practice it makes for an extremely crowded museum.

After waiting in line for about an hour we get to see some mummies. Tim has the worst of it because no one sees him in the chair and he literally has to fight his way in for a view. After that, we wait while three loads of able-bodied adults decide that the adjacent escalator is too much work, clog up the entrance to the elevators. Upstairs, we see Sue, take some pictures, and head back to the exit.

I guess it’s the nature of this type of museum, but there was a strong smell of formaldehyde here. Add to that the over-powering aroma of the on site McDonald’s and you’ll know why I had to get out of there before I hurled!

A quick stop to Soldier Field (Tim has a goal to see every professional sports stadium in the country) for photos and it’s off to the Navy Pier.

No train comes close to the Navy Pier so we take a bus that deposits us a few blocks away and walk the remaining distance.

Navy Pier is one of those tourist meccas with lots of shops and a few attractions. To me, it seemed like Chicago’s version of Universal Studio’s Citywalk or Downtown Disney. It was fun but not exceedingly so. 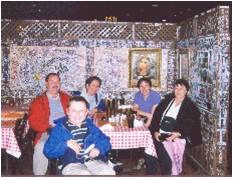 The Interior of Gino's East


Next, it was off for some Chicago pizza. We head over to the River North area and dine at Gino’s East, a graffiti-leaden pizza joint that’s a Chicago landmark. It did look very touristy and was in a neighborhood littered with the likes of Hard Rock Café, Rainforest Café, and Michael Jordan’s. Even so, I was very impressed with this place. The pizza was just superb. Very cheesy, covered with tomato sauce and surrounded with a thick rim of a crust. Among the very best that we’ve had.

Thursday is spent back in Oak Park browsing through the shops there and then one more stop at Fast Track for some more of their delicious dogs. It’s sunny today and in the 50's so we eat outside on the patio. 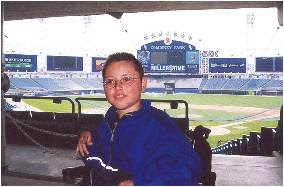 Tim Enjoys the view at Comiskey U.S. Cellular Park. Directly
behind him at the rail is the wheelchair seating area.


After lunch, we take the red line again, only south this time to Comiskey U.S. Cellular Park (another name change - Ed) where we are allowed to go in and take a few pictures and visit the gift shop (the White Sox were out of town this week). As you can see in the picture, the wheelchair accessible seats here are superb. Tim now has all the Chicago stadia in his collection.

On the way back, I see a stunning view out the front of the El train of the Loop and snap a picture. Then I was informed that this is illegal. What the...? Are there state secrets here? Anyway, like I said I snapped the picture first, so enjoy the forbidden fruits at the top of this report.

The next morning, at checkout, I am told their will be no consideration for our two missed breakfasts. How did I know this would happen? The manager who told me is nowhere to be found, in fact, they even charged me five dollars for the 800 number call to my travel agent to straighten it out. Nice to leave Chicago with the steam coming out of your ears.

We go to Midway Airport to catch our flight. Being that we have two hours till flight time, we explore a little bit and find out just how miserable this airport is. We tell the gate agents we’re there so they can have plenty of time to arrange for someone to take Tim on board the plane and to stow his chair. Of course, you know where this is going...

Boarding time comes and no one is to be found to help. We end up waiting until AFTER everyone else is on board before someone finally shows up. Much finger pointing ensues between the airline people and the airport people. Finally, someone takes Tim on board but I am still stuck outside waiting for someone to gate check his chair. I inform them that I will not board the plane until I physically see someone put a tag on his chair and put it on the plane.

About 10 minutes later, I’m on board but we wait another hour because the caterers did not bring enough soda for the plane (ATA does not serve meals so I don’t know why this was such a big deal). Finally, we take off and head for home.


What did we like about Chicago?  Great shopping...I mean great. Fantastic sports town with outstanding food. Historic and original architecture and Frank Lloyd Wright.. Good transportation.


What didn't we like? Can get very, very cold. A lot of rules that sometimes don't make sense. The hotel management doesn't win any awards with me but next time, it'll be somewhere else.


Although not noted on any CTA maps (at the time, maybe they are now - Ed), the Red Line stop adjacent to Comiskey Park is accessible.

Each CTA station has a chalkboard next to the attendant booth listing all station elevators on the system that are not working, check it before being surprised at your destination.
As alluded to in the report, only about half of Chicago’s bus lines are accessible. Even if a bus with a working lift is operating on a non-accessible route, it will not pick up a wheelchair rider. (UPDATE:  all buses and lines are now accessible - Ed)

Distances within the loop are generally pretty short. Don’t worry if where you want to go is 3 stops away from an accessible El station. It’s a pretty short walk.